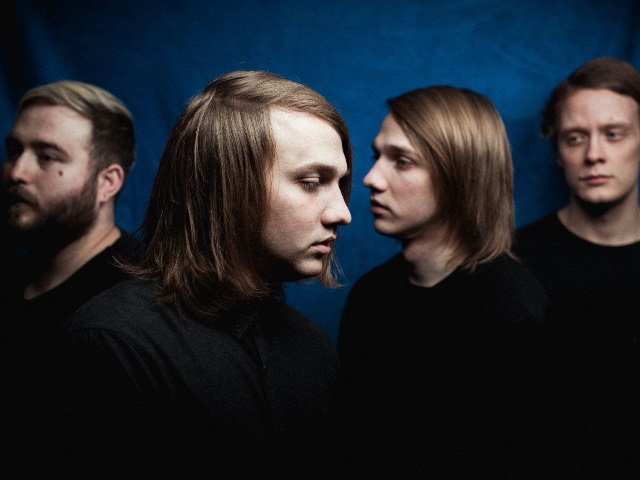 Melodic, heavy music ensemble Modern Error’s emergence amongst post-hardcore has marked one of teal-tinged aesthetics and impressive first impressions in the industry. The Peterborough four-piece ignite their artistic individuality on debut EP Lost In The Noise, a three-part themed project divided by the eight tracks that delve into a psychological rollercoaster of toxicity, desolation and self-separation from society.

Debuting the downward spiral of fragile feelings, Buried and Blue readily rips into Kel Pinchin‘s roaring riffs that provide a platform for angst and aggressiveness to prevail, sonically synonymous to the raging toxicity of the lyrical expressions. Blood brother and band counterpart Zak Pinchin‘s punchy vocals proceed to beg his consciousness, to bare a relearned representation of oneself, boldly bursting into opening verse “I never thought I’d want to lose myself at all/To close my eyes a bid farewell/Drown in the fact that I’m not someone else/So let me leave from this hell, and let me relearn to be myself.”

Lower down the Lost In The Noise numbers, Blackout Poetry packs in a colossal Taking Back Sunday-esque chorus, backed by pounding percussion performed by Connor Nicholls. As far as the inaugural EP song-list stretches, Blackout Poetry’s entirety is a huge, hooked bombardment of brilliance. The success is ongoing with follow-up Cross Me Out, as Pinchin’s prowling rhythms produce a pending atmosphere, before bursting into a chorus that nobly tackles lack of belief and loss of personal purpose.

Largely, Lost In The Noise is a concept record representing a three-part divide. At its core, the EP is dictated by the struggles of self-conflict, harnessing surreal cinematic visuals and an archetypal soundscape that is of novel influence of Nine Inch Nails. Solely, Modern Error‘s flair for lyrical dramatics and raw riffs on introductory EP Lost In The Noise make them an exciting emerging ensemble.