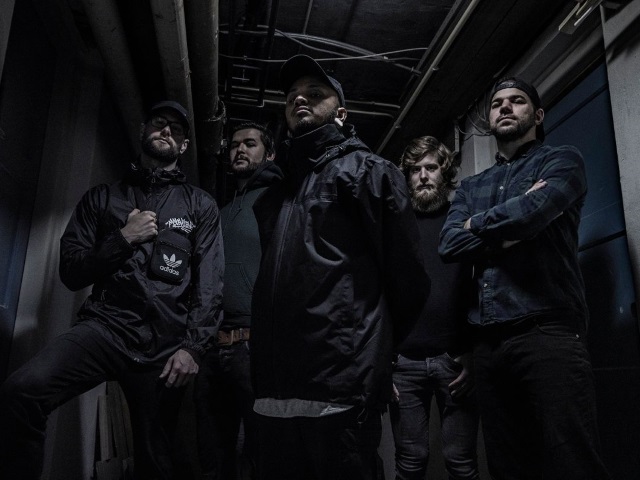 The third album from Eindhoven metalcore act The Royal, their second on SPV/Long Branch Records, starts very much as it means to go on, giving the listener a delicious and satisfying wallop of riffs. Pariah is a strong opener, very much setting the tone for the album to “pummel”. Savages, with its vividly brutal state-of-the-world lyrics, builds on the strong start while State of Dominance, with its narrative of a betrayal and retribution, is a massive highlight, and is the first of many tracks to throw in very interesting electronic touches and a brutal breakdown. In a sensible world, this song would establish its own state of dominance upon live set lists. Soul Sweeper is very evocative of Holy Hell-era Architects in its use of strings towards its conclusion, even if it doesn’t quite hit that albums emotional punch, but then again, what album in this genre would? Nonetheless, it’s still a very strong song in its own right.

When Deathwatch demands that we “break it down with this new shit” it’s a real highlight of the album, with a hard-riffing breakdown that entices the listener to throw a table across a room, also very much achieving the goal of making listeners indulge in the breaking it down with aforementioned new shit. The song also evokes certain moments from Reverance by Parkway Drive, in Sem Pisarahu’s vocal delivery in the verses. Ryo Kinoshita from Crystal Lake makes a guest appearance on the song, and his appearance is definitely not wasted or a misfire. If this song doesn’t spend a long old time in The Royal‘s live set going forward, something has gone very wrong. Without a shadow of a doubt, its the absolute peak of the album.

Exodus Black ups the pace again, not that it had exactly slowed to some sort of crawl, and it throws in a very interesting xylophone sound, peppering it throughout and then concluding with just the xylophone playing us out – it works really well. This is followed by another real highlight, Nine for Hell. Dropping a thick, groovy riff slab that doesn’t half remind us of Bleed From Within in all the best ways, the lyrics reference “nine years of poison running through my veins” and, once again, its a super passionate vocal performance. Also, excellent “blegh” at the start of the track, an always welcome addition to any song.

Lone Wolf starts with an almost nu-metal inspired riff, followed with its pummeling verse and pacey chorus. The drumming on this track really boots it along. Avalon is a late-game highlight, and it starts by well and truly throwing the listener off piste with its almost, dare we say, Eurodance-inspired electronic intro, which contrasts very nicely indeed with the riffing, sounding like the soundtrack to the best fighting game level never made. The rest of the song doesn’t let itself down either. This song really helps the album’s momentum, keeping the listener fully engaged in the final section of the album and preventing it from blending into just a tasty riff blancmange. The album ends with Glitch, a charged and impacting final statement, and there is one final trick the band throws at you. Just as you may think the song and album has faded out, Pisaharu unleashes a very powerful, guttural roar towards the end accompanied by a heavy-as-hell riff just to clock us all round the head one last time.

The overall production job and mix is very good, but maybe a tiny bit lacking in the bottom end. At a brisk forty minutes and ten songs, the album cannot be stated to have outstayed its welcome, and there are no over-long indulgences or awkward ballads that just don’t work. The guitar work from JD Weissling and Pim Wesselink is energetic throughout, heavy and very powerful in the mix, and Tom van Eckershort does an excellent job behind the drum kit too.

If your on the lookout for some solidly well-crafted metalcore that occasionally twists its formula and challenges you, accompanied by a highly charged vocal attack, The Royal have you covered – and then some. Hopefully, this very talented group can ascend to even more regal heights both on the live circuit, and on album number four and beyond.

For Fans Of: Crystal Lake, Parkway Drive, Bleed From Within, Northlane