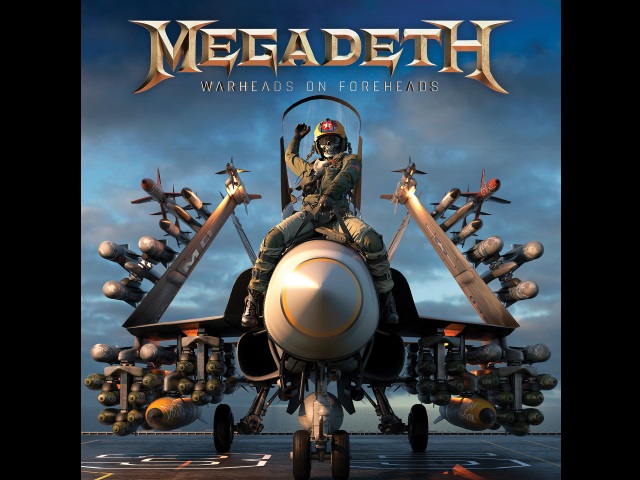 There are certain bands that require little to no introduction. The brain child of the former Metallica guitarist Dave Mustaine, Megadeth are one of those bands. With a career that has spanned more than three decades, a total of fifteen full-length studio albums, a number of live releases and a handful of various compilation albums under their belts. All of which has been achieved with a list of musicians coming and going, that has grown so large that it borders on ridiculous.

During the years between 1990 and 1995 the band would see their most commercially successful period with Rust In Peace, Countdown To Extinction and Youthanasia earning them consecutive platinum selling albums, with their classic line up consisting of Dave Mustaine on guitar and vocal duties, Nick Menza on drums, Dave Ellefson on bass guitar and Marty Friedman on the other guitar. Since then the band have been renowned as one of the most treasured and high regarded metal acts in history, consistently releasing albums of exceptional quality (with the exception of the creative misses on the aptly named 1999 album Risk and the lukewarm Super Collider in 2013).

With Mustaine and his current cohorts gearing up to celebrate the 35th anniversary of Megadeth, they have gathered together 35 tracks that span the entirety of the band’s history, with Mustaine referring to the selected songs as “the most efficient weapons in the band’s arsenal” under the title of Warheads On Foreheads, which is a term used in the American armed forces to describe targeting efficiency.

The first of the three discs contains a wonderful remastered version of the classic song Mexhanix, which was originally written during Mustaine’s tenure in fellow thrash metal titans Metallica and released on Megadeth’s debut album Killing Is My Business… And Business Is Good! The rejuvenated sound of the rhythm section and the clearer mix for the guitars makes the song sound even more ferocious than it did back when it was first released some 34 years ago. This is truly a testament to how advanced the song writing was and how far ahead of the curve Megadeth were at such an early point in their career.

Another highlight from the first disc is Wake Up Dead, which is well known amongst Megadeth fans as one of the band’s first singles to be released with an accompanying video, the lyrics showing the more playful side of Mustaine. Along with the entirety of the Peace Sells… But Who’s Buying? album this track has already been remastered once, but this time around the opening bass riff and heavily palm-muted guitar parts in the verses sound much clearer and as a result, much heavier.

As is the same with all of the discs in this collection the entire discography of the band gets covered, but it is in the older tracks such as Set The World Afire and In My Darkest Hour from the band’s third studio album So Far… So Good… So What!? that really benefit from the extra attention, and take on a whole new lease of life with the modern production that will hopefully introduce a whole new generation of fans to one of the most important bands in metal history.

The second disc plays closer attention to the aforementioned classic Megadeth line-up, with songs from the band’s pivotal 1990 album Rust In Peace such as Hangar 18 and Tornado Of Souls getting the TLC they deserve, sounding more clinical and impressive than ever. Particularly with the instantly recognisable main riff in the latter song. which sounds as though it could hold its own on any modern day metal release comfortably. The inclusion of Sweating Bullets and Symphony Of Destruction from the Countdown To Extinction album is hardly surprising, as the latter brought the band into the eye of the mainstream once again in the mid-00s, with its inclusion on the soundtrack of the global phenomenon Guitar Hero (the quality of the song speaks for itself, regardless).

The third disc is a little more redundant for the most part, as many of the tracks included are less than twenty years old themselves. But songs such as Trust and She-Wolf, which were overlooked at the time of their original release due to the stylistic shift of the band at the time, have aged far better than expected. With the remastering for this release they have scrubbed up pretty well, and may even sway the opinion of people returning to them for the first time in a long while. Another song that many overlooked at the time of its release is Washington Is Next! from the band’s criminally underrated 2007 album United Abominations, which was the only one to feature the insanely talented Glen Drover on lead guitar – the fact that Mustaine has decided to include this track on this compilation says all that needs to be said about the quality of that particular album. It is also very interesting to see the tracks that Mustaine and Ellefson have decided to sit amongst the band’s older gems from the newer albums in terms of quality, with tracks such as Headcrusher, Public Enemy No. 1 and Poisonous Shadows all sitting in snugly alongside plenty of the band’s historically classic songs, proving that there is still plenty of life in the band yet (it also goes without saying that nothing from Super Collider made the cut, this will be of no surprise to fans and critics alike).

The importance of Megadeth as a band cannot be understated, and where normally compilation albums of this ilk can seem like a waste of time and a lazy cash grab, that is not the case with Warheads On Foreheads. This release is a perfect representation of a band that have helped to redefine heavy metal music time and time again with their brand of politically-charged, ultra-technical thrash metal, and hopefully this release will be used as the perfect tool to educate both younger fans and other uninitiated metal fans the world over.

For Fans Of: Megadeth