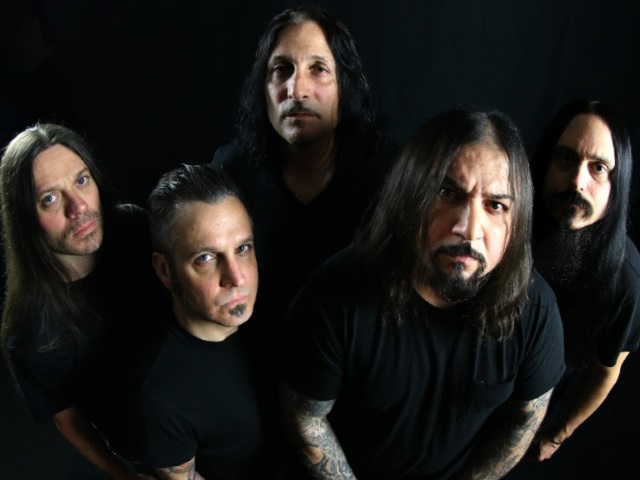 Due to the various commitments of the members of A Pale Horse Named Death fans have had to be very patient, waiting virtually six years for their third full-length album and follow up to 2013’s Lay My Soul To Waste. With that amount of time between releases and the high calibre of the band’s previous works the pressure is on to reignite their creative flame and to create something that was truly worth the wait.

Enter, When The World Becomes Undone.

Ignoring the brief, atmospheric introduction the first real taste of new music comes from the album’s title track When The World Becomes Undone, which greets the audience with a haunting piano introduction playing underneath the soft, almost tranquil vocal delivery from frontman Sal Abruscato. This is pure indulgence of the pageantry and theatrics of the Goth stylings that the band has embraced since its formation. It would be all too easy to get whisked away in the grandeur right up until you are smashed in the face with an onslaught of dense, heavy, doom metal guitar lines and rumbling bass. It’s at times like this that the three-guitar attack of Abruscato, Joe Taylor and Eddie Heedles really shows its power and creates a wall of distortion that is simply staggering. One thing that is apparent during this song, and throughout the entire release, is that Abruscato certainly hasn’t lost his ear for melody and sings in a way that could almost be mistaken for the late, great Layne Stayley from the Seattle based grunge/metal titans Alice In Chains, with his use of drowning melodies in certain sections and raw power and toughness being used in others.

The next highlight on the album comes from Fell In A Hole and shows the band’s ability to wander seamlessly between genres, fully embracing their influences without the songs ever seeming out of place on the album. Once again the band stroll between their gothic and doom metal influences by fusing impossibly heavy guitar tones, massively distorted bass lines and the hard hitting drumming of John Kelly to create a wonderful back drop for the melody to soar over. One of the focal points of A Pale Horse Named Death’s sound is Abruscato’s ability to write memorable hooks, and this is no more apparent than in the chorus of this track which is incredibly catchy and bears a real ear worm for the listener to take away with them. The unsung hero on this track is the wonderfully well written lead guitar work, that not only steals the focus for the solo section, but also adds to the overall melody of the song by playing underneath the vocal lines in a very tasteful way.

The second half of the album boasts another gem of a song in the form of Splinters, which shows the band slowing things right down and gradually building the layers of the track over its nearly six minute duration. This song is a wonderful example of how beautiful A Pale Horse Named Death can make misery seem and how they can take a meandering, slow burning track and turn it in to something so much more with their exploratory vocal harmonies and intriguing lyricism.

The only slight downfall of When The World Becomes Undone is the duration of the album, as the whole release clocks in at more than an hour with an impressive thirteen tracks. Despite the fact that the songs are all of impressive quality, the second half of the album has a couple of songs that serve as intermissions that could probably be omitted and would not have lost any of the momentum that the band have worked so hard to create.

This album is a triumph. The third release by any outfit has often been regarded as the biggest hurdle that any band could have to climb, even more so than the sophomore release after a successful debut. What makes this album an even more impressive feat is the amount of time that has passed since the last release and the patience that has been required by the fans.

The expectation was high and the resulting album was superb. This is not so much wallowing in misery, but worshipping in it.

Standout Tracks: When The World Becomes Undone, Fell In A Hole, Splinters

For Fans Of: Type O Negative, Life Of Agony