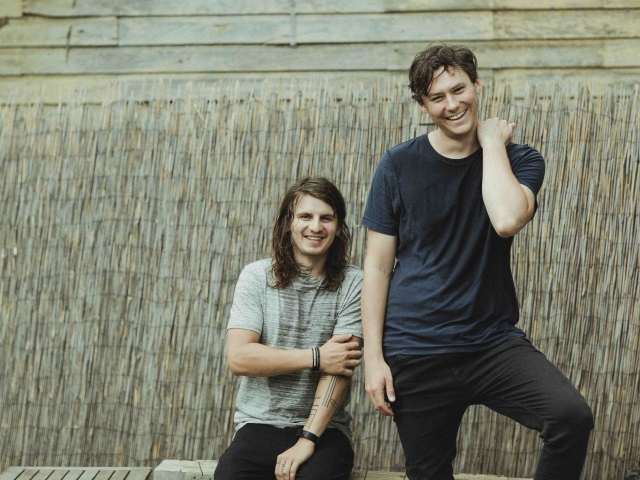 We caught up with Brian Sella and Mat Uychich, better known as The Front Bottoms, at Reading Festival earlier this summer, to discuss their Ann EP, how live shows compare in the UK and a whole lot more. Read on to find out exactly what went down.

You played the Radio 1 Stage earlier at Reading Festival, how was it for you?

Are you looking forward to heading off to Leeds?

B: We’ve heard all day that Reading is the best.

B: I’m just excited to hang around tonight.

Are there any bands you’re trying to see?

B: In a festival situation like this, the chaos. You kind of just try to see whoever you can.

How do US shows for you compare to UK shows?

M: UK, you guys like to chant things. That’s a fun part. Something that the US does not know how to do.

B: What did we play today where everybody chanted? There was something today when everyone was like singing along the lead part which is something that doesn’t happen in the states. Round here it’s such a show of support.

B: Lots of participation. Even if we weren’t having a good time they sure would be.

Can you tell readers some more about The Ann EP?

M: It’s the second installment in the thing we have called The Grandma Series. It’s just five older songs that we recorded years and years ago that we re-recorded and made new.

What would be your favourite or most relatable lyrics you’ve written?

B: From us? I’m not sure. I don’t know as it’s hard when you write the lyrics to know what’s happening.

B: In Vacation Town, today in particular. The second verse you know…

M: “I could only express my love when I’m fucked up or far, far away.”

B: I feel like when I say that, especially today that there was something in it. That’s always cool.

B: That guy’s got a flare, is that allowed?

M: My festival anthem? Are Fall Out Boy going to play their anthem? Do they have a song called Anthem?

B: I mean they might, they probably do. For some reason when you said that I thought of that song.

[We start singing The Anthem by Good Charlotte with Brian]

B: You know the song Don’t Stop Believing?

M: I’d say “give me the beat boy, free my soul. I wanna get lost in your rock and roll.”

B: So when you rediscovered that song was it the original or was it like a cover version?

M: I think it was the original version. That’s my anthem right there.

B: I’m going to go on a sabbatical. You don’t know what that is, do you?

B: A sabbatical is when you work at a certain place for a certain amount of time like an office and they give you six months of paid vacation. You’ve got to work there for like ten years or something like that. But we’ve been in the band for a little over ten years and I’ve not had a chance to go on a sabbatical.

You’re going to give yourself a break then?

B: Nah I’m just teasing. We’ll probably make another album next year and do it all again.

Is there anywhere you’ve not played yet where you’d love to go?

M: South Africa would be sick.

M: I mean it would be sweet.

M: I guess the same with Mexico.

B: Mexico would be such an insane experience. If you want to play in these spots you have to play the way they play there. You don’t show up with a bus, you don’t plan to play before 2am. But that’s not really our vibe at this point. Mexico would sick. There’s a band called Tiny Moving Parts and they’re insane, they’ve toured Mexico.

So in summary; a lot of touring and maybe some new sights being visited!