FESTIVAL FEATURE: Ones To Watch At Reading & Leeds Festival 2018

This week sees the return of the annual Reading & Leeds Festival, home to not only some of the biggest acts, but also the best up and coming names from across the globe. Wondering who you should check out over the weekend? Check out our ones to watch guide!

Hailing from Australia 2018 has seen The Faim make waves on UK soil, leading them to a slot on The Pit/The Lock Up Stage. Debut single Saints Of The Sinners, which was co-written by Fall Out Boy’s Pete Wentz introduced listeners to their energetic, guitar-driven sound. The band have also released singles Midland Line and Summer Is A Curse so get learning the lyrics as their live shows require plenty of crowd participation, as we found out when they supported Lower Than Atlantis and Download Festival. The Faim are set to release their debut EP in the not so distant future, check them out and get yourselves ahead of the game.

Comprised of Jason Aalon Butler (ex-letlive.), Aric Improta (Night Verses) and Stephen Harrison (ex-The Chariot), The Fever 333 burst onto the scene earlier this year, and with a line-up like that we knew that they wouldn’t disappoint. Debut EP Made An America is a testament to this, a punk/hip-hop hybrid that we’re stoked to see live. The band played a one-off headline show earlier this week and will headline the Heavy Music Awards before they appear at Reading Festival (unfortunately the trio won’t be playing at Leeds) – we’re expecting nothing less than total chaos on The Pit / The Lock Up stage!

After making a very welcome return with their Rebirth tour in 2016, Underoath are back in full swing with the release of their new album Erase Me earlier this year – their first in eight years! Not only will we get to hear the new material live, but we’re hoping that we’ll get to embark on a nostalgic trip back to the early years. Reading & Leeds Festival marks the end of a summer of festival appearances so we’re expecting the band to be on top of their game – and we can’t wait!

After spending the summer in the US playing their first and last Warped Tour, Trash Boat are coming back to the familiar territory of Reading Festival. The band have recently released their new album Crown Shyness, the follow up to their 2016 debut Nothing I Write You Can Change What You’ve Been Through, so expect a mix of old and new material this weekend. Edging away from pop-punk to a heavier, rockier sound, we’re excited to see what Trash Boat are made of, making the leap from The Pit stage to opening up the Main Stage.

Relatively new to the UK scene West Thebarton are an Aussie outfit with an intriguing garage-rock sound. Releasing debut album Different Beings Being Different earlier this year the seven-piece have just completed a run of UK shows, closing up at London’s House Of Vans. Recent single Stuck On You sums up what West Thebarton are about; gritty guitars, relatable lyrics, gravelly vocals and drumlines that get beneath your skin. With an already solid following in Australia, where they were nominated a whopping six times at last year’s South Australian Music Awards, the time has come for the UK to see what they’re about and for them to make their Reading Festival debut.

Ahead of the release of their new album Greater Than, Birmingham rockers SHVPES will be making everyone’s day a little louder on The Pit/The Lock Up Stage. With elements of pop, rock and metal their experimental sound offers something for all tastes, making SHVPES are one of the most exciting bands around at the moment and the quintet’s unpredictability leaves you wondering what their live show will bring. The remainder of the year sees a tour in support of Hawthorne Heights and a run of headline shows, so Reading & Leeds Festival will be the perfect warm up.

If you want some hardcore to set your weekend alight then Blood Youth is the band for you. Releasing their album Beyond Repair last year the quartet are limbering up for the release of its follow up, having recently revealed new single Starve. Looking for some aggressive yet surprisingly meaningful music to use up some of your energy to? Then Blood Youth‘s set is for you.

Ohio rockers Beartooth have been favourites of ours since the release of their debut album Disgusting and we’re so excited to see them return to the UK for Reading & Leeds Festival. The energy and passion that the band deliver on stage is something to be admired and there’s never a dull moment, as frontman Caleb Shomo works the crowd to ensure that everybody is having the best time possible. Having recently announced details of their third album Disease expect to hear some new material, as well as tracks from the band’s hard-hitting back catalogue.

“Who are Sleep Token?” is the question on everybody’s lips. We still have no idea, but one thing we do know is that the mysterious musical collective will turn heads far and wide at this year’s Reading & Leeds Festival – and impressively this will be the project’s ninth and tenth performances (or ‘rituals’, as they’re known). The masked and cloaked beings have already garnered lots of attention from industry and fans alike, and it’s no surprise with their haunting and mesmerising sound. We hope to hear their stunning cover of OutKast‘s ‘Hey Ya’ this weekend, but either way we’ll see you down the front.

Swedish rock outfit Normandie will make their debut at Reading & Leeds Festival this weekend and boy are we ready. The last time we saw the quartet live was during their UK tour in December and they blew us away with their soaring performance. The band have recently announced their new album White Flag and we can’t wait to hear their new singles Ecstasy and White Flag live for the first time – not to mention the huge tracks from debut album Inguz. With touring plans with Crossfaith and Hands Like Houses confirmed for later in the year this is the start of something exciting for Normandie, and we can’t wait to follow them on their journey. 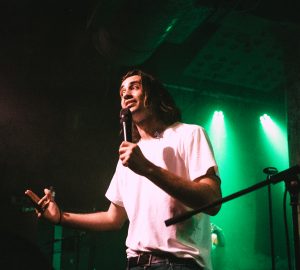