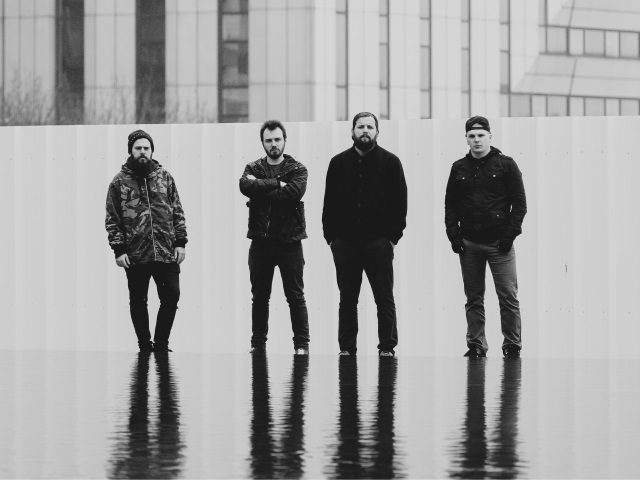 It is safe to say that French metal music is doing just fine. From the technically charged, progressive metal titans Gojira (who are redefining heavy music with awe-inspiring ease) and Betraying The Martyrs, who are carving out their own niche style within the industry with their unique blend of metalcore, progressive metal and deathcore, right through to Novelists, who have only recently released their second full-length offering which is packed to the brim with genre-hopping metal tracks to outstanding levels of critical acclaim.

Another band that have created waves on a lower scale so far is The Dali Thundering Concept. Since their inception in 2010 the band have released two fine bodies of work. Firstly their debut extended play When X Met Y followed by their first full-length effort Eyes Wide Opium two years later. The sheer quality of these two early releases earned the group spots on tours supporting bands such as Fit For An Autopsy, Heart Of A Coward and Between The Buried And Me to name just a few (as well as an impressive performance at the well renowned UK Tech-Fest).

With the band’s latest effort named Savages they look to take the next step and attract the high levels of attention and exposure that they rightfully deserve.

The album opens with the track Ostrich Dynasty. A strange title for sure, but the music itself speaks volumes about what The Dali Thundering Concept are here to do and that is to create a unique and expansive take on modern metal music. The long, eerie introduction wouldn’t be out of place on one of the drug-fuelled Pink Floyd albums of the 1970s and paves the way to some huge, low tuned riffs, a swirling vortex of intricate lead guitar parts and a collection of awkward, jolting time signatures.

The second track on the album, The Myth Of Happiness, (which coincidentally is also the second single to be released for the album) carries on the pace and inventive riff writing that appears to be a theme throughout Savages. The guitars shift between impressive lead runs and near on percussive riffs that support the odd time signatures laid down by the air tight rhythm section.

Ink is probably the closest thing you will find to your run-of-the-mill deathcore song on Savages. The technical -riffs are dialled back a lot here and are replaced with bouncy, low-tuned chugging riffs throughout the verses (albeit with intricate fills thrown in and amongst). Towards the middle of the song is a sustained lead guitar part that gives off a very eerie sensation, the kind of guitar work that would sound right at home in the middle of a Thy Art Is Murder track. The band also take this track as an opportunity to throw some hellacious blast beat drumming into the mix for good measure and to ensure utter devastation when this song is played live. The guest vocals from Adam Warren of Oceano for the breakdown section of the song provides the icing on the cake. His demonic, guttural vocals could pull the flesh from the bone and add that kind of crushing and unbridled power that this particular song needed to convey.

The highlight of the album comes in the form of a five and half minute progressive metal epic Utopia, which flies out of the gate with a plethora of slapped bass lines and guitar riffs which are likely to turn the heads of fans of Animals As Leaders and Protest The Hero. The vocals are delivered with the same ferocity and crushing power as you could expect to hear on most death metal albums, but with an unrivalled level of clarity so that the listener can distinguish and interpret every syllable. The guest vocals from Kadinja frontman Phillippe Charny are a welcome change of pace and add yet another layer element to this already jam packed album, providing the entire section with a wonderful, soaring melody. The track then picks up again with the kind of feral animosity that is sure to send the pits spinning when the band play it live. Perhaps the biggest left turn on the album comes at the crescendo of the track. The instrumental builds and builds until it reaches the boiling point, normally this is when you would expect an apocalyptic breakdown to drop but then no… instead, a complete U-turn with the music shifting into a clean section and a saxophone solo. That’s right, a SAXOPHONE SOLO. This is the kind of wonderfully absurd and unexpected moment that makes this album so great, and it is incredibly refreshing to find a modern metal album that does not simply follow the same blueprint that every other band around it follows.

Overall it goes without saying that this album is a tremendous success. The experimentation and progressive nature of the songs is pushed forward by the virtuoso playing skills of the musicians involved, and the string of impressive guests alike. If The Dali Thundering Concept carry on the upwards trajectory in the future then they are destined to for great things.

A refreshing taste of exciting, forward thinking in an over-saturated and increasingly stale sub-genre, and one that will certainly be making many people’s top ten lists come the end of the year.