MUSIC INTERVIEW: Between The Buried And Me 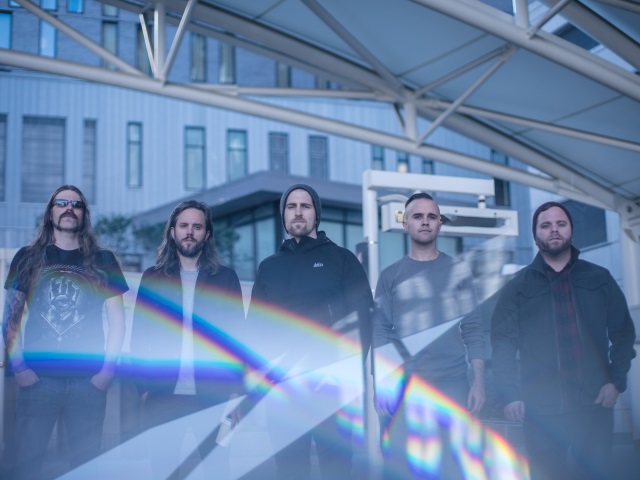 Between The Buried And Me are the benchmark for modern day progessive metal. For nearly two decades they have been creating some of the most unencumbered, genre-hopping metal music around and having recently released the first half of their eighth studio album Automata I they show no sign of stopping. We managed to coax them out of their busy schedule to answer a few questions and to see if we could get an insight in to the intricate minds of the band.

Hey guys, thank you for taking the time out of your day to talk with us. – You’re currently working your way across America with The Dear Hunter and Leprous. How is the tour treating you?

Today is actually a production day and tomorrow is the first show in Chicago.  We are in Indianapolis this afternoon and tonight setting things up and running through the set. The Dear Hunter is here as well and things are going well. Looking forward to starting the tour tomorrow it should be a good run!

March marks the release of the first half of your eighth studio album Automata I will the setlist be showcasing plenty of the new tracks or will you be mixing it in with some of the old favourites?

We are mixing new songs in with old songs, playing 3 new songs. We didn’t want to do the whole album just because when we’ve done that in the past early on it’s been a little weird. It should be really good on this run. We have a good set together. For us, we treat a set like an album we want it be very cohesive and have a good flow. We’re not the type of band that starts and stops a lot and talks between songs so we always try to find a way to make old and new work together. It’s always a little challenging but I think we did a really good job with this one and it should be a good tour.

This first instalment of the dual album focuses around a single concept. Would you mind going into a little bit of detail about the story that entwines ‘Automata I’?

The basic version of the story is that this man’s dreams are broadcast all over the world for entertainment and a lot of the store takes place in one of his dreams where he’s trying to find his family that he’s lost. We find out that the family doesn’t exists and he’s searching for something he’s always wanted in life. It involves a lot of corruption as well. There’s a company that takes advantage of him, and he basically goes mad, but the almighty dollar is in control of their decision. It has a lot of different layers but that is the simple explanation. The character goes through a lot of developments and in the second part of the album deals a lot with depressing and big business. I’m excited for people to dive into the lyrics as well as the music.

Each album you have released has had its own formula and style. When you get together in your rehearsal space to write do you aim to do something completely different or do you let the music take over and lead the way?

The last few albums when it’s time to write we’ll all in the mind-set that we’re done touring and it’s time to get creative and we all write a lot on our own. We are individually getting stuff together but we’re not interacting with each other much at all. Then we slowly start sharing what we are writing on our own and we use that as a way to see which way the album is going. We’re not the kind of band that sits there and plans out what the next step is. We want the music to lead us in a way that is very honest and natural. We don’t want to be the kind of band that says ‘ok this album we need to do this’. We’ve never done that. We’ve never forced a moment of our writing it’s always been a perfect representation of the time period, where we wrote it and the people we are at that moment. That’s how we always approach it.  There’s not a whole lot of thinking behind it and it takes it course from there. We work really well as a unit. Its kind of tough to explain how writing works, it just does.

Will the second half of this release be following on musically or will you be taking it in a completely different direction?

We’ve actually recorded the second half as well. We recorded it all as one piece last year. It’s a different vibe but still sounds like it. It’s a little more experimental, dives into a few different territories but I think both albums are very cohesive with one another and feel really good on their own as well, which is why we chose to do this.

We are now scarily almost a quarter of the way in to 2018. What does the rest of the year hold in store for Between The Buried And Me?

As of now we are planning out our summer and winter so most of the year is planned out already. We haven’t announced anything yet so I can’t really give any more details. It is going to be a busy year for us as we have two albums coming out this year. I have new solo record coming out hopefully late this year so we have a lot going on.

It is a breath of fresh air to see a band reach this stage in their career that still has the hunger and desire to push their musical boundaries like you do. What else would you like to achieve as a band?

With the band we’re not really seeking goals. We just do our thing year after year and do it our way, I think that’s what we’ve always had pride in. We do things our way, in terms of our business, our music;  that’s just part of who we are. We do still have that hunger and that drive to write music and get excited about it. It’s fun to write in this band because we all write very differently from one another and you never know what’s going to happen on an album and who is going to write what. We’re very lucky to be in a place where we work very well together yet we still surprise each other with things we work on. It’s always evolving and we are trying to perfect what we consider Between The Buried And Me.

Finally, any words of advice for young musicians looking to Between The Buried And Me for inspiration?

My main thing is to be honest in every part of life and in music you should write what comes out of you.  Don’t write songs because another band is doing something. Don’t follow a trend or  keep up with what’s ‘hot’ at the moment. Just do your thing and if that thing is what people want they are going to be drawn to it naturally. I think in any art form that is very true. Also be patient.  People think things happen over night, but we’ve been a band for 15 plus years and half of our career we barely made a dollar.  While we have success now it’s not like we’re rock stars living in mansions. We’re a blue-collar band, working and living tour by tour. You are either able to handle this lifestyle or you are not, there are a lot of ups and downs and you have to be able to juggle all of that. You have to work with one another because you will grow older together, you will have personal lives, families etc. Find good people and write from your heart.

Once again, thank you very much for taking the time to talk to us. We wish you all the very best for the upcoming year and hope to see you crossing the pond to the UK very soon.

I appreciate the interview and we will be over there on this touring cycle for sure.

Between The Buried And Me’s new album Automata I is out now via Sumerian Records.

Tags : Between the Buried and Me
previous article