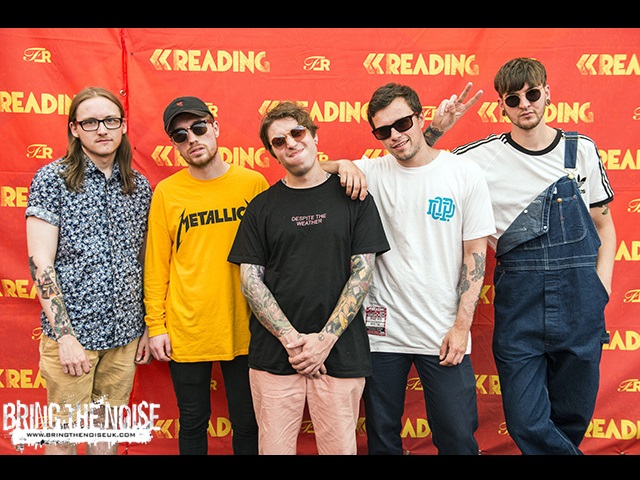 On a sunny Friday at Reading Festival and ahead of their set on the Lock Up stage we sat down with WSTR. Having returned from a run of shows in Australia the quintet were in a great mood as we chatted festivals, Australia and Red, Green or Inbetween.

You’re playing The Lock Up stage later today, how are you feeling ahead of your set?

S: Dream init. Should be good.

Alex: Going to be absolutely sick.

Jason: I was heavy Reading and Leeds festival – mainly Leeds. Pit stage is normally my favourite stage lineup so I’m usually there.

Andrew: You guys have been going since you were kids, I’ve never been! This is the first time I’ve ever been.

S: It’s the first time he’s ever been to a festival.

Andrew: It’s a bit mad. No expectations at all.

So no camping for you this weekend then?

Alex: We’re going to go to Leeds tomorrow and camp there over the Sunday.

Hopefully it’ll be more camp-able weather for you there.

S: We just got back from Australia and it’s hotter here.

What does Reading mean to you as a band? You’ve already touched upon this but could you tell us anymore?

S: It’s one of the biggest festivals in the UK so it’s pretty great.

J: It’s definitely a milestone festival Leeds and Reading obviously. It’s one of the biggest festivals in the UK so to be part of it is great.

Alex: For me going to Leeds festival for five years as soon as WSTR started it was my goal to play Leeds. So for me, it’s a very big deal.

S: Other than Glastonbury it’s the top one in the UK. Everyone’s grown up with it. I met most my friends at Leeds so it’s great to be playing it.

You released your album earlier this year Red, Green or Inbetween, how has the response been?

S: For sure yeah, even with Skrwd, the first EP we released, it was an overwhelming experience with that but the album is just another level.

Andrew: Couldn’t have expected better really. We never expect anything because we’re a pretty new band still, so to be playing stuff like this off the back of the first album.

J: The feedback has been unbelievable so it’s great.

If you had to choose a favourite/most relatable lyric from your album which would it be and why?

The perfect lyric for a festival!

Andrew: Really should have thought this through.

You’ve recently got back from an Australian tour, how was the whole tour experience for you out there?

S: About two hours ago. Nah we got back yesterday. It was amazing.

J: The tour wasn’t long but the drives were.

D: With Con [With Confidence] are like the coolest guys and we were welcomed very well, and Seaway like the best of friends as we’ve toured together in the past. But to be at the other side of the world with kids singing our lyrics back.

S: A bunch of kids as well. It was insane. They seem to be really appreciative of everything you do.

J: I guess bands don’t come over so often as it’s expensive to tour out there and the routing was killer.

Alex: Everyone seems to check you out before they go to the show and that really shows.

D: We had a bunch of people that either first listened to us the morning of the show or at the show and they got vinyl and stuff so.

Alex: Even the shows not supporting With Con the kids were travelling to see us at the shows.

S: We met up with our friends Trashboat. Weird seeing them in Australia. It just felt like we were in the UK a couple of years ago playing basement shows playing with Trashboat again except it was the other side of the world!

You’ve had a huge 2017 let’s be honest, including an album and a whole lot of touring, but what’s been going on behind the scenes and what do you have coming up?

Andrew: Well a lot more of the same.

D: We’ve got some stuff.

S: Writing. We need to crack on with writing the next album. A couple more tours which are coming up which we can’t actually mention sorry!

D: What about The Killers?

S: Every time I hear Foals – My Number reminds me of Leeds fest.

Alex: Maybe Seven Nation Army as when it comes on everyone’s singing it. Anyone in any crowd ever.

S: Yeah any of them!

VIDEO NEWS: The Family Release ‘Ain’t Gonna Happen Like That’