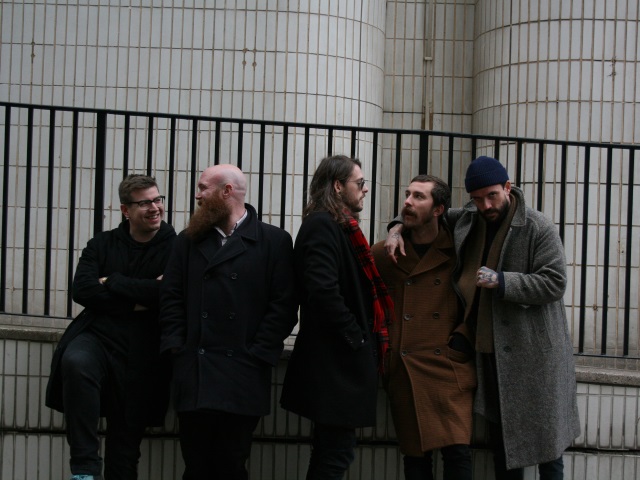 At Reading 2017 we had a chat to Joe Talbot (vocals) and Mark Bowen (lead guitar) of Idles. Undoubtedly one of our favourite interviews of the weekend, we were accompanied by a great little lad called Isaac who’s been described as their future drummer – they’re already planning ahead for generations! We spoke to the band about their latest record Brutalism, festival anthems and more.

You’re playing the Festival Republic Stage later today, are you looking forward to it?

Joe: Absolutely, it’s a dream come true for me. I’ve been coming here since I was 16 years old. We got a free ticket one year, I can’t remember what year it was, but I felt too old and never came back. Honestly, I think when you hit 24 it’s time to hit Glastonbury.

We definitely get what you mean, we’re starting to feel old here!

Mark: Try being in your thirties.

J: Reading for me was the only festival I ever went to and it’s when festivals weren’t everywhere. It was a massive thing for me it was where I learnt about music. Most my favourite musical moments were at Reading. It’s fucking big things.

Can you tell us about some of the favourite musical moments you experienced here were?

I learnt how to watch bands and understand what good live music is and I learnt like how to be on my own with my mates for a weekend and get absolutely mashed on drugs. But Reading was something I’d talk about til the next one. Seeing Arcade Fire walk on the crowd in the NME stage when Funeral had just come out or seeing Arctic Monkeys in the New Bands tent which was the first one in on the left. When there were about 500-600 people outside the tent trying to get in. Seeing The Strokes get bunched up to the Main Stage in 2000 and one? Stuff like that. Best thing best festival for me in a romantic way but I wouldn’t go again ever. Can’t do the drugs anymore Isacc I’m getting too old!

You’ve just announced a show at Village Underground in London but what else is on the cards?

J: Album number two is being recorded in January.

M: Doing a European tour in November December time so after the Village Underground show we’re going to Germany and France.

J: We’ve got a few more dates around the Village Underground show but I don’t know if we can say

M: There’s nothing cast in stone yet. But then there’s something we’re not allowed to talk about yet which is absolutely amazing.

J: Yeah we got some really exciting news.

J: It doesn’t make any sense.

M: 2017 has just gone more and more mental, every single weekend something insane or me, when I was 21, would be like WHAAATTT. Last night we were playing with Liars who are on after us and Angus the main guy in Liars was just sat backstage with us chatting to us about different tunes and bands and stuff, it’s just like crazy. Absolutely crazy.

J: The thing we can’t talk about that was one of my most magical moments at Reading actually. Seeing this gipsy guy who had an ice cream truck, pull this guy off his ice cream truck to beat him up during a certain song. Everyone just stepped into beat this guy off, it was a beautiful moment.

M: Who was playing that year Joe?

How have you found the reponse to Brutalism?

J: Shocking. Like we kind of wrote it for us not anybody else in a way we were going to release it and do gigs and stuff but we wrote it with the idea we couldn’t find anyone to sign us. We were desperate to get signed, looking left right and centre but nobody was interested so we thought we’ll just do it for ourselves. Get this album out the way and go back to our day jobs. Suddenly people are paying to come and see us and we can go tour around Europe and play Reading and Leeds. It’s magic.

M: It’s really shocking onstage whenever we’re like playing something like Mother in Poland and people are singing the lyrics back to you. You’re actually shocked onstage. Like how do Polish people know this?

You mentioned it must be weird hearing people singing your songs, a lot of your songs are based on world issues, your views on issues in the world. Do you feel like music has helped people become more socially aware of what’s going on around them?

J: Not more socially aware. I think what it is is it’s like a platform for discussion. I dunno it is and it isn’t. One of the things which is happening at the moment is the smoke screen effect, for instance, the whole Katy Perry I hate the term but it was used in the press that she’s ‘woke’ now. I was like no, it’s just like her production and management team have seen people are more socially aware as they’re getting fucked over by their governments so they’ve gone you know what’s cool now? Political. So do something political. She did this big pseudo big brother, pseudo woke bullshit video. There’s a grey area as sometimes music can bring people together to open up discussion but it’s also my songs are just as nonsensical as they are educational so I can’t see how I’m education anyone. I think it’s just nudging people into the pub and going fuck the Tories.

M: I think as people get more and more fucked over they can’t be as apathetic as they used to be. So young people have to be more aware of things as they’re getting fucked over constantly. I think there needs to be that kind of understanding that they can’t be as apathetic as they were, they need to instruct change and move things forward. That’s probably why people are more receptive.

J: We always talk about it but it’s not something we’re doing for the music. The music is allowing us to talk about what we always talk about. It’s not like right let’s be a political band now. When we sounded completely different my lyrics were still about politicians being bastards eight years ago. That’s one of the things that hasn’t changed I’m just better at writing them now. But I dunno, love songs can be political. There’s loads of policial bands about there always has been but at a time when the economy goes downhill it wakes people up to the idea that politics is the language of survival within classes and social economic groups. That’s just how it works. Everyone’s a bit more hungry than they once were before.

What’s your favourite or most relatable lyric you’ve written?

Isacc: I would say, Mother.

J: Obviously. Not just because he likes swearing but because he loves his mother. I think for me there was a lot of nuggets on that album which really surprised myself and it’s due to hanging out with funny friends. I’ve got a couple of mates who are just hilarious and they inspire me to write more colloquially. My favourite which I can think of which is really truly like me is I think “He punched himself in the face to prove he’s not gay” on Exeter because it sums up suburban life. Bored young men. For me, my favourite kind of lyrics are when someone can sum someone up really succinctly and not be all flowery and waft around and spend ages trying to find the words but just hammer it in one sentence. I think that’s the kind of my favourite lyric, it’s not my absolute favourite but Mother for me means a lot to me. I like the idea of my mother works fifteen hours five days a week and sixteen hours six days a week. That repetition and that slight change is the idea and mythology of the parent that does all this crazy work and goes away and feeds you and you don’t realise how amazing that is. But when you get older you realise it wasn’t fifteen hours it was fourteen to fifteen hour days every day but I realised that when she got home she was my mum she worked at home. She worked herself to death it’s sad.

M: My favourite lyric doesn’t actually mean a lot but it’s because I didn’t twig what it actually meant. But in Date Night: “I tried to shake shake shake it off but I shook myself to boredom”. I didn’t understand then I was like shocked.

Final question, but since we’re at a festival what would be your festival anthem?

J: Oh good one. Tender by Blur because that was the best gig I’ve ever been to. No was it Tender? The whole of Glastonbury sang it. Was it that one? But is that what they finished on and everyone sang? Do you know what for me, maybe Karma Police would be our anthem. We kind of cried on each other’s shoulders for two years in a row at Glastonbury because they did secret sets. He likes Radiohead more than I do as he likes their latest album which is absolute tosh. But yeah he’s also a Bowie fan… Bowie’s last two albums are shit. It’s not okay that he died, he was an amazing musician but he just turned into a hipster twat. To answer your final question, Karma Police because we bonded over our love of them!

MUSIC NEWS: Death From Above Announce As Support To At The Drive In On UK/European Tour