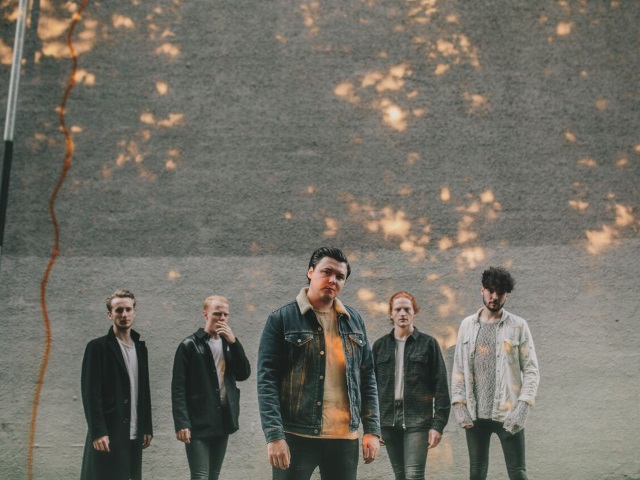 There’s chance you’ll have heard the name Fizzy Blood a lot recently, and it’s no surprise why. With their exciting live shows and recently released Summer of Luv EP the Leeds band are showing no signs of slowing down. We caught up members Jake Greenway and Benji Inkley following their show at Reading Festival to find out more about what’s going on in their world.

You’ve just played The Lock Up stage at Reading, how was it for you guys?

Benji: Really hot. I almost feel like the heat didn’t affect me but there was one or two bits where I was like woah, you know. Everyone’s always complaining that it’s always cold but it was hot today.

B: It was amazing though, let’s not take that away from the experience.

J: The crowd were amazing. Singing along and dancing along. We had a few pits, it was great we couldn’t have asked for more really. Considering the crowd we got at Leeds we didn’t know what to expect at Reading because it’s not really our stomping ground, but I think the crowd was probably twice the size here. The tent’s bigger to be fair so yeah it was just amazing to walk out to that many people.

Have you managed to catch any other bands this weekend whilst you’ve been playing?

B: To be honest up until now, we’ve been busy getting here and setting up then doing the first bit of press in the morning, then making sure we’re okay for playing. We managed to catch on Friday at Leeds Liam Gallagher, Muse.

J: The later on bands. We saw a bit of Don Broco. Then we saw Queens Of The Stone Age of course.

B: That was incredible. Pretty special. Our favourite band.

They were brilliant here this weekend too!

J: I saw the set and they played all my favourite songs at Reading and none of them in Leeds.

ADHD has received a large amount of support from Radio 1, how did this happen and did you expect it?

B: We’ve got a fantastic press agent.

J: Angela at Devil PR is doing a great job.

B: Half didn’t expect it because it’s us. Half kind of expected it because of the team we have around us you know? So big up the team of Fizzy. Angela at Devil PR!

J: We’re far better set now compared to our last release which we sort of managed to blag radio play via BBC Introducing and stuff really. It’s nice to have a team of people around you who believe in the music and work their arses off to make sure it gets where it needs to be.

B: I saw a fair few people singing along today which was cool.

Don’t forget to give yourselves some credit for writing and performing the music though!

J: Thank you very much. I think I look at it this way because I know plenty of good bands who don’t have the sort of team around them as we do and it’s hard work. You’ve got to put that hard work in to gain those people to get good music out there. The industry is a hard egg to crack nowadays so I think the people working around you are just as integral to the band in the sense. Obviously, the music has got to be there but obviously if you haven’t got people helping you out to make the music heard there’s kind of no point.

Pawn’s lyrics touch upon the manipulation in the world. Would you say it’s focused more on within the industry or the world view of how it happens?

B: I suppose it could be looked on in the wider context of things as general manipulation, but it wasn’t really written about the industry was it?

J: It was more of a take on talent shows.

B: A very specific part of the industry. Talent shows with the overnight fame kind of thing. Without it sounding cheesy…

J: Take what you want from it. For us, it came from really just getting annoyed with the industry in a sense but more the televised side of it. It’s just a joke really.

B: Something happened to us in London this one time, around the time we were looking to move on and work our way up through labels and stuff and someone made a comment about us. Like not looking good enough. They said they’re not good looking.

J: They’ve got great songs, they’re a great band but they haven’t got the looks basically.

B: It’s loosely about that.

Let’s be honest it’s better to perform well and looking good is just a bonus.

J: We’re not too arsed with looks.

B: Looking good isn’t very high up on my list of priorities. It didn’t bother me it’s just such an annoying kind of thing, it shouldn’t even matter you know?

J: Susan Boyle can do it why can’t we?

Your new record Summer of Luv is released the start of September, could you tell us more about the recording process for it?

J: We did it in the same way as we did Feast. We recorded it on a real tight budget as that’s when we were doing stuff on our own and didn’t have anyone helping us out. I think we scratched together £250 and went into the studio for a day, set up in a room and did just five tracks.

B: The bare bones of five tracks in a day.

J: Kind of inbetween that and this EP we tried different methods, nothing ever really got there for us. A year down the line we were like why does nothing sound as good as Feast, what’s missing? We like kinda just realised for us we’re a live band and we thrive off the energy we get from playing with each other so we kind of realised we were missing it doing it a different way. For this record, we were like let’s do that there again but now we have more money we can have five days there.

B: It’s a refining process.

J: We did the same thing, we got in a room and really all that takes to make that thing work is instead of being that band that goes to a studio and spends two weeks writing the songs in there. For us, it’s a waste of money. Do the hard work on your own then get in there and be prepared for yourselves. We’d just come back from a tour and we’d been playing the songs so it was just natural for us to go into the studio and recreate what we had been doing. That’s kind of the ethos of the songs. They’re all kind of ideas we picked up along the way from just touring and playing shows together that it was only right for us to do it in that kind of way really. It came out sounding just how we wanted it to.

Could you sum it up in five words?

J: The EP? Oh god. That’s a hard question. You’re trying to not sound like a douche.

B: It’s recorded live to tape.

What would be your favourite lyric which is your own?

B: “One hundred needles to a thread it’s just a game, always ends the same”.

B: That’s off January Sun, I wrote that in uni when I was a bit down and didn’t have like a girlfriend or anything and kind of like got into that going out culture. Where like you’re trying to not pick up girls but like talk to these girls and don’t get anywhere and then if it goes somewhere it’s like a hundred guys on one girl. That’s an exaggeration but a hundred needles to a thread. It’s just a game at the end of the day. Its kind of a euphemism out of it. I didn’t explain that very well but that’s my favourite lyric.

J: What’s mine? Healing Isn’t Free. It’s a song that’s not a single but it’s on the EP so if you get it you’ll hear it. The chorus is “look in the mirror you might not like what you see. But one day soon you’ll have to answer to you and I’ll have to answer to me”. I think that’s like my favourite line because it’s just a little rhyme which I really like and it’s the thing I think everyone goes through at some point in their life as it’s just quite a general feeling a universal emotion. That was one of the songs when I first heard, Paul wrote that one and he sort of sent it over and we changed it and stuff but when I heard it I was like “this is sick”. But then another favourite I really like the lyrics on ADHD as well “I get wasted all the time”.

J: I couldn’t believe it. We went to see him in Leeds and I couldn’t believe it. He opened with Rock ‘n’ Roll Star and I was like he’s playing Oasis songs. I’m not the biggest Oasis fan but they’re one of those bands you know the songs even if you don’t love them. To get to see that actually played live was like really cool. I lost my shit. Then he closed on Wonderwall and I was like as if! It was a really weird feeling like I don’t think I’ve ever seen a band where everyone in the crowd knows the song. I think that’s one of the only songs across the UK everybody knows the words to. He did it and it was just the weirdest thing looking around and everybody knew every word. It was just really cool man!