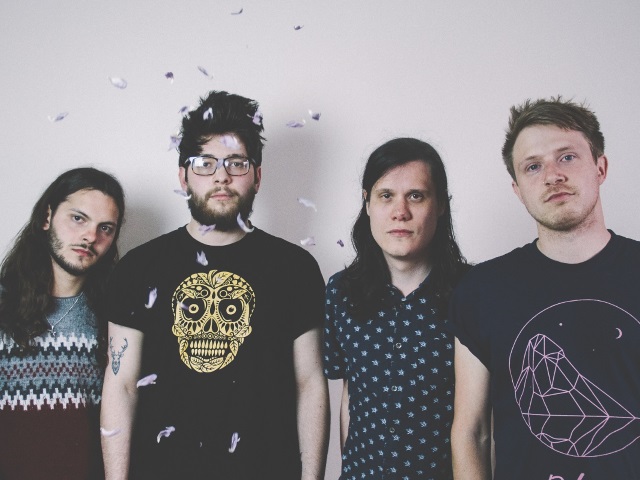 This week sludge pop/alt-rock quartet Bellevue Days release their new EP Rosehill and return to 2000trees Festival. We caught up with the band ahead of the festival to hear their top tips and stories from the road, from waking up in a pool of beer to living off service station sandwiches.

Alan: I love being able to hang out with the lads, chilling out in a Travelodge having a right old laugh.

Jack: Meeting new people, music enthusiasts and general characters! We were recited some spoken word once by the van and I’ll never forget it.

Dan: Actually that cafe in Scunthorpe wasn’t too bad…

Alan: For me it’s probably the waiting around before shows, especially if soundcheck is at like 3 or something.

Jack: There’s a lot of hanging around, I think there’s this perception of everything being well wild all the time “touring life” – can’t complain though, could be stuck in Croydon!

Dan: Definitely the boredom before shows, and living off service station sandwiches.

Alan: A good Spotify playlist, socks, some spare guitar strings, hairspray and some of them £1.99 McDonalds vouchers.

Jack : Google maps…oh and cards, or a chess board

Dan: A good book and a crochet hook.

Joe: Getting beaten at chess whilst arguing with Dan about the meaning of life.

Dan: I’ve got this crochet blanket I’ve been working on whilst in the van. It’s not very rock n roll but it keeps me sane.

Joe: Going to the best night club I’ve ever been to in Norwich. It’s called The Waterside or something. But to be fair I’m used to hearing bashment in a basement in Croydon.

Alan: Playing a pretty much full tent at 2000trees last year was pretty memorable, especially when everyone was singing along to Ripped Jeans. Fucking sick.

Dan: Watching The Story So Far tear the Camden Underworld apart after our set.

Alan: I’d say driving to Cannes for almost 2 whole days was pretty hilarious…ly shit. It’s 24/7 bants with us so I’d say it’s actually too hard to pinpoint one moment.

Alan: I remember we were playing some show, we were playing our song called Sleep and before the second verse came in I started thinking about what I sing and completely forgot the words, so I just mumbled some shit and started laughing throughout the rest of the song, literally so stupid. Luckily everyone laughed with me, awkwardly ….

Joe: Watching one of your band mates find out what a Glasgow kiss was the hard way.

Dan: Watching the baristas in Cannes literally pouring almost full bottles of champagne into the bin at the end of the night! Naturally we asked for a couple of bottles, not one to let it go to waste.

Alan: Jack waking up in a pool of beer on a Travelodge bed, that was pretty jokes.

Jack: Alan throwing his kebab in the road out of frustration when we got lost as fuck in Liverpool

Alan: Yeah, Electric Ballroom was so good, playing in front of 800+ people who seem to be enjoying your songs is pure gold.

See Bellevue Days live at one of the following shows: