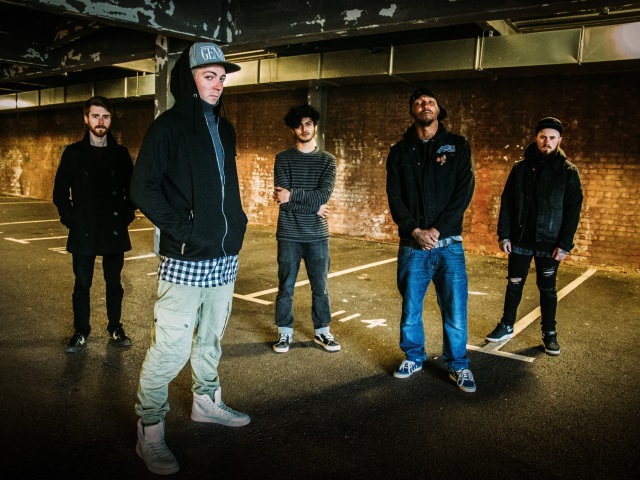 Opening the mainstage at Download Festival is no small feat, and this year Hacktivist undertook the role on Saturday 10th June. Having played only a handful of shows with new co-vocalist Jot Maxi there was additional pressure riding on their shoulders; we spoke to J Hurley and Rich Hawking about how it went and what’s on the cards right now for Hacktivist.

You opened mainstage this morning, how did it go since you were the first band of the day?

Rich: It was hectic to start, a bit rushed getting onstage and all sorted, but the crowd were all there and they brought it. A few circle pits and stuff, it was great.

It was one of your first shows with your new co-vocalist Jot, what dynamic does he bring to the band?

J: Different vocal style, he brings his own energy.

J: He brings his own vibe to what we’ve already done and he’s also bringing a new bit of flavour and energy.

Jot featured as a co-vocalist on Rotten so did it feel natural having him join full time?

R: That’s why it worked out so well because obviously, he was already on a similar level to us when we thought he’d be a good match for the feature, so yeah.

How did it come about him joining you as co-vocalist?

J: When Ben [Marvin] left we were obviously thinking what are we going to do to carry on, so we had a little think and spoke to Jot and he was well on it. We all had another little think and got down to practice and it worked well, so we thought awesome!

You recently released a new version of Rotten called 2 Rotten how has that gone down with fans?

J: We’ve only played it twice but it seems to have gone down well.

J: It takes a while for people to learn the words, they’ll start to learn them the more we play it though.

J: I’ve never been to Glastonbury before so I don’t know what the mix is like.

R: Me neither. I feel like people will be pretty open minded. There’s a big mix of artists throughout the whole weekend so despite the hardcore electro element there are still people like Jay-Z doing the mainstage or whatever, so it’s pretty varied. If this is the first year they’ve actually been doing the Earache Records stage I think people might go specifically for that. Who knows, it should be good!

You released Outside The Box last year, is there any chance of a follow up coming anytime soon?

J: We’ve been on it working on a couple of things, demoing things with Jot. We’re definitely going to release another.

R: Now that we’ve actually got a new co-vocalist. It’s just a case of writing and getting it all sorted. That’s the next step.

R: If someone played Sun is Shining by Bob Marley then that would be my festival anthem. If it was actually The Wailers that would be even better.

J: I’m going to go with Rich on that one.

Finally, how are you spending the rest of your weekend and is there anyone you’re really looking forward to seeing?

J: I missed a couple of bands I wanted to see yesterday, I’m just going to go with the flow and see what I like. I’ve already seen SikTh and they were pretty sick. Yeah, just going to see how it goes the rest of the day, I’m not too sure.