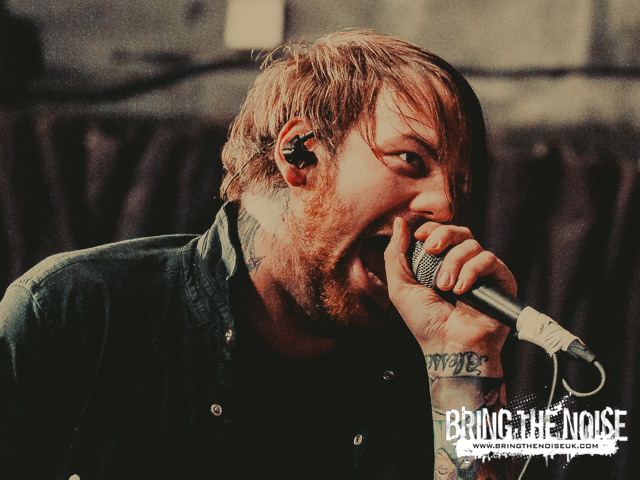 Within the ever stirring world of metalcore, Beartooth are an American band who have been absolutely soaring during the past year or so, touring with bands such as Pierce the Veil, Bury Tomorrow and Stray From the Path across the globe. During their last visit to Glasgow, they landed what could be described as a ‘pretty good’ impression. But with a recently released second album entitled Aggressive and a supporting tour to match, any chance to see a possibility of improvement of an already solid live band is a graciously accepted event.

Introducing the evening’s musical ventures were Trash Boat, hailing from St Albans in England. A change of theme from the bands to come, Trash Boat played a mixture of reasonably attributed post-hardcore and skate punk. This seemed to grab the attention of a few members of the audience, although this success cannot be found with much legitimacy, as the ironically named five piece gave a lacklustre performance which wholly forgot substance within both the songs being played and their stage show, unable to allow a connection to naturally grow with their efforts. Scraping past a few memorable parts, reliant stage cliche twirls and empty exhilaration, Trash Boat ultimately failed to deliver a performance that could be recognised as anything other than forgettable and uninspiring.

Vanna brought the main support to a gig which seemed filled with an incredibly young audience, who were certainly unfamiliar with their brash, dirty and gritty post-hardcore repertoire. Despite such a contrasting and outward style, this appeared to do nothing but spur the five piece Boston hardcore troupe on further, as frontman Davey Muise supported his bandmates on-stage flamboyance with concentrated charisma and authentic crowd interaction. Despite reiterating some tried and tested hardcore frontman tactics, every word uttered in attempt to rise the crowd was full of belief and conviction, winning over more and more spectators as their set went on. The band introduced and successfully bonded with their audience, proving their vitality as a live hardcore band. With a well orchestrated setlist of hits such as Mutter and Piss Up A Rope, Vanna have landed an evident impression on a legion of the younger generation who are not even attending to see their performance.

The final and main act of the night were Beartooth themselves, a band featuring ex-Attack Attack vocalist Caleb Shomo, and in the mere seconds of their opening track it’s clear that he was overqualified for the job in his previous outfit, by considerable margin. The Ohio metalcore outfit looked like sheer professionals through a phenomenally produced veil of flash and colour lighting, not to mention a massive sound bouncing across the room. The song choices alone set the crowd into lingering spells of action and thorough movement, from old anthem-like favourites such as I Have a Problem and The Lines to recently added tracks such as Hated and Aggressive.

From the excitement and age of the attendees, Beartooth seem to be heralding the new face for the next generation of upcoming rock and metal bands, with eyes set on massive heights they are well on their way to becoming possibly the best band around today; capable of influencing the younger generation of heavy music fans, with the only thing you need to accept this deceivingly preposterous suggestion is a simple ticket to a show. It’s a thoroughly difficult task to find a band more worthy of such a title.