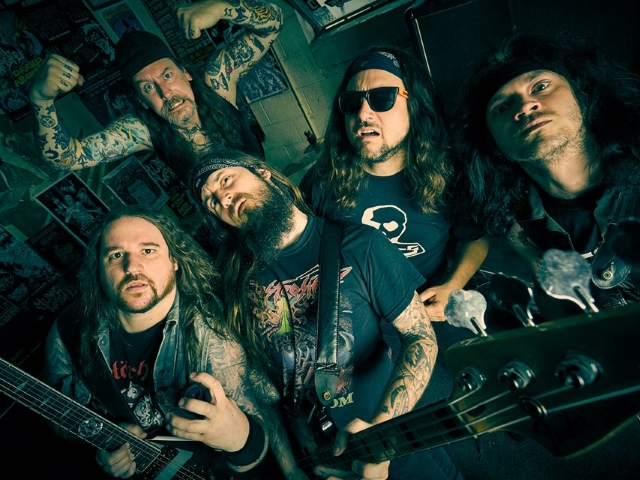 It’s Saturday at Download and the sun is testing us with its cheeky appearance, and our next interview is with long time legends Municipal Waste. We greet frontman Tony Foresta for a chat, and with his shades and metal locks he’s looking cooler than school.

It was nice! We played real early. I guess it’s a different set up now, it was cool! Back then we were surprised people knew our songs.

So now it’s a bigger festival and you have momentum behind the band, how are you feeling about today?

This is our first show in about 4 years so really excited, we love it here in the UK.

Well we are excited to have to you.

On Thursday you announced new addition to the band, Nick. Will that take you guys in a new direction?

Yeah! We’ve just wrote our first album with him…He’s actually been in the band for 6 months we just didn’t want to tell anybody [laughs] We actually played a few shows with him a few months ago as a little trial run.

Well now we know we can’t wait to hear the new album! If you guys could be responsible for putting one band on at Download who would it be, dead or alive?

Right, fun box time! Dive on in! We don’t know what question you’re going to pull out as they are all random, crazy ones so this could be dangerous.

[Laughs and picks one]

If you could have one last meal what would it be?

Ah man it would probably be mac and cheese!

That would be our choice! [High fives]

You can put different stuff in it and jazz band your mac and cheese!

Jazz up your mac and cheese! [Laughs]

Can we do one more?

Sure! What’s the most Rock ‘n’ Roll thing you’ve ever done?

Maybe doing a belly shot off a band member?

Well thanks for chatting with us, good luck with your set later!