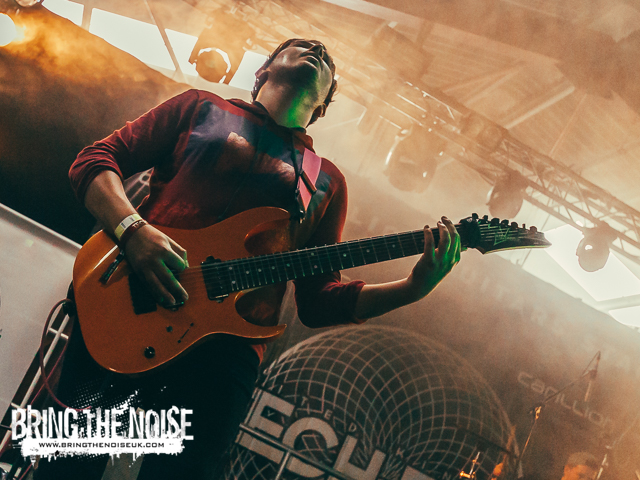 Amongst the highest points of Tech-Fest, Frontierer‘s first official live show on the final day easily came through as one. Before they unleashed sonic chaos upon Newark Showgrounds, we grabbed a quick word with the guys to gather some thoughts on their album, their live show and the nature of the beast that is Frontierer.

For the unassuming listener, how would you describe Frontierer?

How did you guys come to be?

P: MySpace! Chad found the Sectioned band page and messaged about talking about vocals. I think I politely declined because of the distance but we kept in touch, and I decided to do an online thing so we made two tracks, one instrumental and one with vocals. And after that, I mean, a few years ago it was just a project and now it’s an actual band.

We hope you guys don’t mind if we draw a parallel here, but what goals did you have for Frontierer that were different from Sectioned?

P: None, there wasn’t really any. I mean I didn’t think shows were immediately realistic, but think goal wise it was just to write heavy tunes because I really like Chad’s vocals so I guess one was to make an album that just punches people in the face. A tasteful punch in the face! Aggression really, the music is already aggressive enough without vocals, from start to finish it’s complete hate.

How important is the production to giving Frontierer the character it gives off?

P: 50 percent. I just switch off when mixing, nowadays I don’t really tweak for hours or anything, maybe a patch change but not overthinking too much.

Dan: I think as a listener before being a band member, it was really interesting to hear this kind of music without the incredibly surgical, diced up production because that probably happens 80 percent with this kind of music now. To hear it with a really abrasive and organic sound with modern day technology I felt lent itself really well with the production. And that was before I was even involved with the band.

P: There is a process with both bands, and the guys are aware of the process now because they are now aware of the bits and bobs. Chad was basically like “fuck it”. Shouts over something, stellar quality, bounces everything out exports it exactly how it’s needed and somehow does it juggling another band, late working hours and a family. Which is ideal for me because recently for me, vocalists are fucking infuriating. There is nothing worse than when you’re trying to be productive on something and there’s people who hold you back, but this guy has been flawless from start.

O: I listen to a lot of beatdown type stuff and I know these guys don’t really, but from my experience listening to that stuff and coming to Frontierer, it’s so different. Most of the things I listen to are fairly linear where this is far off.

P: It’s fatiguing but not in a synthetic way.

Do you guys have plans outside of Tech-Fest to continue gigging?

P: We’ve got plans for European shows, no USA shows yet. We’re looking into agents, wink wink nudge nudge to anyone who’s listening! But the possibility is definitely there, I mean we’re all earning, we’re not quitting our day jobs, so if we can work around peoples day jobs then I’m hoping to get there as well as being financially realistic because we’re not gonna go broke over it. But people are even buying the free downloadable CD which is really cool, so the more that continues the more the possibility of us playing more increases.

Do you think the nature of the band’s music brings challenges to playing live?

Calum: I had to completely change the way I play. Because Pedram wrote it and he’s a guitarist, he played the bass like a guitar and doubling the guitar parts, so I had to go from playing mostly fingerstyle to mostly down picking and palm muting. Basically Like playing it more like a guitar. That took 6 months! So yeah, it took a while to get used to that.

O: Same here. Sectioned was so different in the style of drumming. I’m not a professional drummer or anything so the fast stuff I played in the band, that’s all I’ve really played, where as this is more kinda groove and trickier feet work, so it did take some 6 months worth of serious working.

D: We don’t use tracks, there’s no Axe FX, no samples, we might have a bit more challenging in more the organic sense. There’s no cutting out with click tracks and stuff. While other bands might splice and dice less enticing parts of a performance out so it’s surgical, this project is more about being really abrasive.

P: It’s equally as disturbing but perhaps in different ways. It’s not going to be a rehash but for people that might think that it would be crap or that it would be a re-hash, it’s not. But the live performance is definitely going to be familiar with bits and bobs. Obvious sorts of changes that you would expect in the progression from a record to live. There’s no ethos as such. And then Chad with his coordination of two practices makes me sick. Particularly Dan and Calum had to totally change the way they play. I’m quite fussy over some things but it’s because it’s just the way certain things need to be delivered. I mean I’ve made some adjustments but they’ve also made their suggestions of improvements, it’s very much a synchronised movements.

Chad: I mean you think when you write it that you know it…normally! When I wrote it, I couldn’t turn the hate off so I didn’t put it together thinking on how to be able to breathe it all! I had to do some sections on certain parts, I mean obviously it’s as realistic as possible, but certain things you overlay. But I got the instrumental versions, threw them through a PA with some videos and sent it to the guys. But to get my air underneath it, it took about a week.

When you finish a release, are there any songs that strike out immediately as being a must-have on a live set?

P: Bleak. Maybe looking back on it, about 7 of the songs are hits in my mind. I would actually maybe cut the album in half, because 15 tracks is a lot. But the songs that aren’t the hits in my mind, I’ve had people mention to me how it’s their favourite on the record. I mean a lot of bands tend to write filler in their albums. 3 or 4 really solid tracks but then not so much with the rest, but then of course there’s bands like System of a Down who write hit after hit after hit.But I try to avoid any fluff between songs. A recent album I thought was like that was Wrongdoers by Norma Jean. Some really good tracks, some heavy hitters, some lighter tracks, but there were some songs that just really didn’t need to be there.

O: I listen to the album from song 1 to song 15. As a listener and a fan, it flows but quite in a different way. There might be some filler but with the energy it’s providing nevertheless, I’m enjoying the entire ride.

Chad: I mean for me, when I write some stuff, if a track is less catchy than the next, I’m going to try write something in it that’s going to really pull something out. Something that’s gonna make it a lot more playable maybe. Bleak was one because of the riff and tone that I was like, yes! But I would write stuff, then Ped would make changes after that, it was so fast! But yeah, Bleak and Bunsen for me.

D: Totally agree as well with Bleak and Bunsen, as soon as I heard it I was like fuck this is awesome!

Obviously the music is incredibly aggressive, but lyrically, do you follow suit with the violent nature or do you try to convey other themes and ideas?

Chad: I mean, when you hear stuff like this, it is very apocalyptic. But in the world today, it’s all a mess. For me, I write very poetically in a sense, I don’t want anyone to know what I’m talking about. Very abstract. I’ve had people ask me all the time “what does it mean?” and I’m like what do you think it means, which produces something really cool, it’s similar or different.

So almost up to interpretation?

Chad: Yes. I literally hear a track and the first thing that grabs me, that’s what I write around. A pattern, a phrase, I can take that an create anything I want around that. I only write when I’m driving the car to work, or when I’m mowing the yard grassing, I don’t write with headphones on. Things come to me very fast. I mean I wrote Orange Mathematics and I was also finishing up A Dark Orbit album. I wrote 4 albums last year. So it’s really dumb but that’s how I memorise stuff, it starts on a phrase or something, but it still resonates with the apocalyptic vibe. I try to write abstract with words too, I mean there’s no F-Bombs or anything, people told me that’s why they like my writing, no filling it up with crap. It’s already angry enough, I don’t need to add that! You agree with that too actually don’t you?

P: Yeah, I find it quite dumb actually, and lazy. But what’s quite interesting subconsciously is that we have the same writing process. I’ll pick one thing and write around it, like a riff or something. But yeah, the situation will normally be daft too, I mean it’ll be 4 in the morning with work soon and I’ll be recording, meanwhile he’ll be cutting his grass at 1 at the same damn time also writing!

Guys, thank you so much for your time, really looking forward to your set. The best of luck with it!