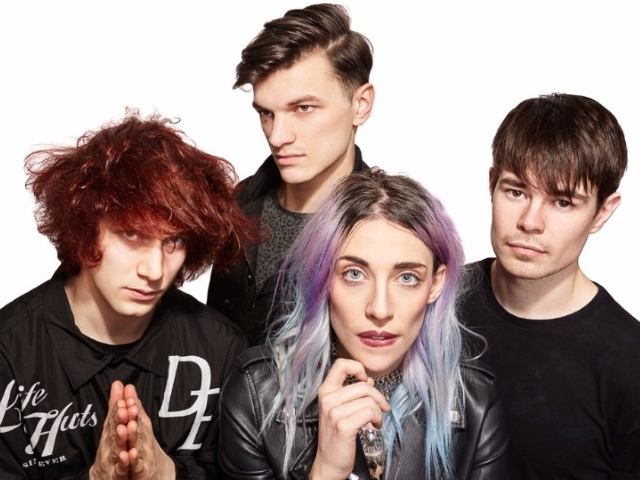 After a chat about Scotland, Irn-Bru and other random things we got down to the serious stuff with up and comers Vukovi, following their debut appearance at Download Festival.

You guys have had a couple of festival appearances so far, but what does Download mean to you?

Janine (vocals): As a rock band it’s THE festival you want to play.

Jason (bass): All of the bands we look up to have played so it’s a great honour.

Have you guys ever been as just a music fan?

Janine: No I think that’s a rule of mine, well a challenge. I don’t want to go to a festival unless we can play it, it becomes a goal.

That’s a great motivator! What festivals have you got your sights on next then?

Hamish (guitar): We’re actually going to do an album next!

We can’t wait to hear it! So you’re from Scotland!

The land of Irn-Bru and much more! Your tour manager is literally sporting an Irn-Bru bag do you all love it!?

Colin (drums): We haven’t been able to get any!

H: In fact the only can I saw was at security on the way in that had been confiscated and it was one of our crews! [Laughs]

Janine: I would love an Irn-Bru right now!

Besides Irn-Bru, Scotland is responsible for a lot of amazing music! What’s the music scene like where you’re from?

Jason: It’s a small town but there’s lots of music there, a lot of up and coming bands!

Janine: There’s nothing else to do but get drunk so everyone makes music! [Laughs]

So have you always wanted to be in a band then? Can you remember the moment you thought ‘music is what I want to do’?

H: I think since we all quite young!

Janine: It was either that or get drunk.

H: We’ve dedicated a lot to it!

Who would you say are your musical heroes?

H: At the moment or in general?

H: I would say Deftones after seeing them live yesterday!

Jason: I mean Chino! I think everyone was in love with him! He was so good!

H: They are the only band I have waited to see all day at a festival. I wouldn’t do that for any other band!

We think we were all under a bit of a Deftones spell yesterday! Is there anyone you see yourself influenced by?

Janine: Erm I don’t like modelling ourselves off anyone, we like to do our own thing. I especially don’t like being seen as a girl singer you know, I just want us to do what we do.

Jason: She’s one of the lads really!

Janine: I’m very laddy, I grew with a brother so you know. I just don’t like getting compared to other people as a female, I just bring my own energy.

You definitely gave a lot of energy in your performance and we think you guys are very unique! For those of our readers coming across you for the first time, by reading this, why should they check you out?

You are fun! Speaking of, it’s fun box time [a crew member passes Jaffa Cakes round and we all tuck in] – fun box and snack time!

[All laugh, all pick one]

Here we go…If you could invent a law what would it be?

Jason: Well in music, no phones allowed. All phones should be banned at gigs.

C: Well no because Janine likes to take them off people!

Right one more! Let’s hope it’s a good’n! If you could be tortured with one song what would it be?

H: It’s not that we don’t like it but there’s a really poppy Japanese song called PONPONPON by Kyary Pamyu Pamyu.

[Band start to sing it]

We know that song!

H: [surprised and laughing] Do you? That’s ace! They’re playing in London soon as well we all want to go!

Jason: It’s a good song I would just imagine it would get annoying after a while!

We agree! Super catchy though!

Well you guys have been super fun and it’s been a blast! Can’t wait to see more from you!

VIDEO NEWS: Against The Current Reveal Video For ‘Wasteland’ 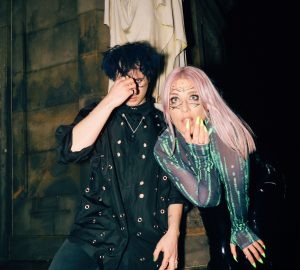