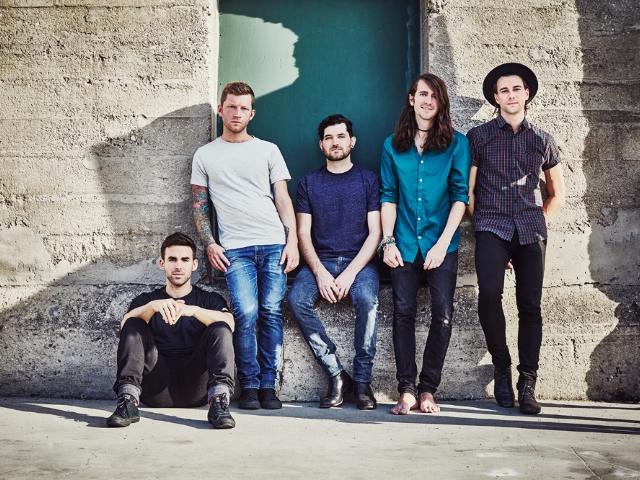 Ahead of their main stage slot at Slam Dunk Midlands, we sat down with Mayday Parade vocalist Derek Sanders and guitarist Brooks Betts for a chat about all things music. With their fifth studio album, Black Lines released in 2015 and also signifying their tenth year within the band, there was plenty to talk to these guys about!

Hey guys, how was yesterday’s Slam Dunk for you two?

Derek: It was awesome, it was a lot of fun. It was very interesting because our drummer Jake Bundrick isn’t here as he had hip surgery and he wasn’t able to come so we had our drum tech fill it and we didn’t rehearse at all. So it was kind of scary.

Brooks: But he did a great job, it was really good.

Would you say it’s weird not having your original drummer with you, do you feel it changes the band dynamics or because he’s teched for you before does it not feel much different?

D: It’s weird not having Jake here in general as we’ve always just never played shows without him. At every show, it’s always been the five of us so that part is weird. But honestly we just felt pretty comfortable up there, there were times when I almost just forgot and I looked back and saw he wasn’t there.

You’re one of the bands on this year’s bill that has been around for over ten years, but how have you managed to keep it exciting for yourself still?

D: We’ve kept to a routine of putting out an album every two years and that helps a lot. But just us in general always have fun every show and I think we realise how lucky we are to be able to do this, especially for this long. So it’s easy to have fun and enjoy it while we can.

Black Lines was more of an experimental sound for you, do you think on your next release you’re going to mix it up again?

D: I don’t know, it’s tough to say. We’ll definitely keep moving in some other direction but I don’t know I just like the idea of having a lot of diversity in an album and not having a lot of songs that sound the same. Maybe some stuff which is heavier and some which is light and everything in between you know.

D: It’s kind of early to say, we haven’t really started having conversations about the next album yet but I’m really excited as we’re in a good position. With Black Lines we just kind of did whatever we wanted and now we’re going to keep doing that so we’ll see how it goes but I’m very excited about it.

Do you feel like the bands that you listened to when you were younger have influenced your sound?

D: Yeah, absolutely. To begin with we listened to a lot of bands circa New Found Glory, Taking Back Sunday and Brand New which influenced us a lot in the beginning and in Black Lines I feel there’s a lot of that as well like 90s rock which we listened to when we were younger. So yeah, I think the bands we listened to earlier on in our lives have influenced us.

We briefly mentioned this earlier but how have you been able to stay as friends and not have any massive arguments/disagreements over the past ten years?

D: Well we’ve had arguments but you know it’s never anything bad enough that anybody would quit over it. We’ve all been friends for a long time, even before the band so we grew up together, went to school together and played in different bands so that’s a big part of why we’ve been able to stick around for ten years with the original line-up.

B: We’re very like-minded too. We all have the same mindset of what we want as a band, new things and share the mindset which I think keeps us from having a lot of arguments. They don’t really happen much because we all re-think some more and give each other space when someone needs space and don’t push each other too hard.

You act as mentors to a lot of younger bands so to speak, would you say there’re any upcoming bands which you’re really enjoying?

D: We’re all getting older so we don’t really know what new bands are out there. When you’re younger you’re constantly searching for those bands to find out what’s new. Fresh things which are out there but as you get older you kind of get stuck in your own little world and you only listen to what you heard or catches your ear but you’re not actively searching. If I hear something that sounds cool I’ll listen to it, I couldn’t tell you if it was a new band or an old band.

Have you checked out any bands yet this weekend?

D: Honestly, not really no. Wait, I really like Moose Blood they were awesome. The other bands I watched were bands I already knew like some of Yellowcard’s set, New Found Glory and things like that. But today I plan on getting around and sticking around a little bit later today so I plan on watching some more bands. It’s a little hard to get around every stage. There’s definitely bands I want to see so I’ll try to cruise around and check them out.

Did you expect Black Lines to be as well received as it was?

D: I didn’t really know what to expect.

B: It was kinda what we expected, I mean we knew it wasn’t going to do as well as our past albums as we were changing our sound so a lot of people would take a little bit longer to get into and wouldn’t buy the album straight away. That’s to be expected any time a band changes their sound, people sort of drop off there. But it was well received which we were hoping for and that people would enjoy it and we’re happy that they did because now it gives us room to do even newer and more different things in the future because we know people will stick with it and give it a listen.

As you have such a big back catalogue this might be a hard one, but if you had to sum up your time in Mayday Parade with one of your own lyrics which would it be?

D: Tough to say but one of my…maybe this is a little bit more depressing than it is but one of my favourites and kind of makes sense is from Without The Bitter, The Bitter Isn’t As Sweet. The lyric is “even if it’s dark at least we’ll be together,” which is like even if through bad times at least we have each other.

We couldn’t let you go without asking what can fans expect from 2016?

D: Yeah Warped Tour this summer, Australia in the fall, there’s a few other international things which haven’t announced yet. Just writing, getting ready for album number six which sounds crazy!

Thank you for your time and enjoy your weekend!