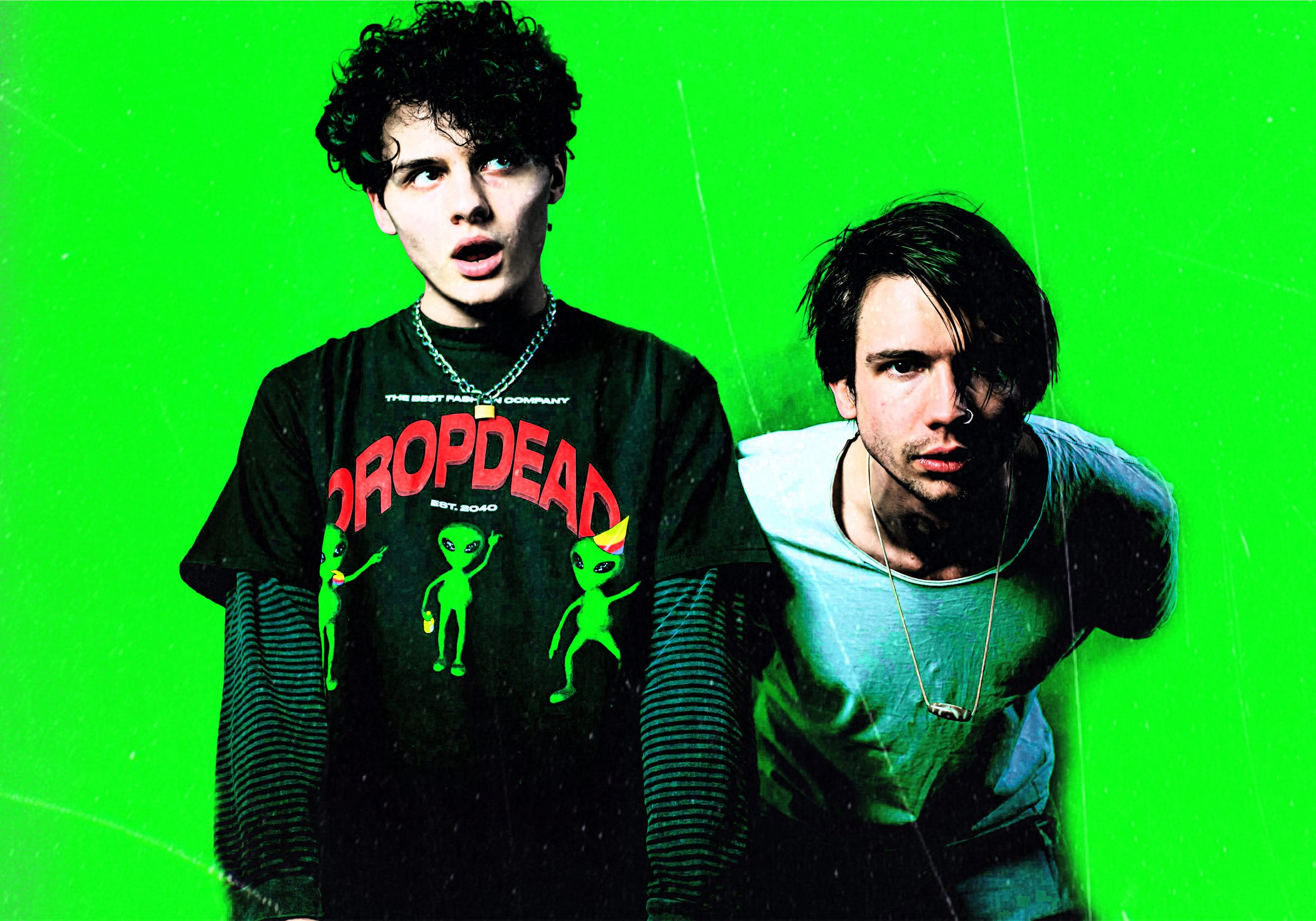 A noisy collision between raucous alt-rock and infectiously aggressive punk, London based duo CRASHFACE crashed onto the scene back in 2020. Since then, the duo have released a string of relentless singles including Molotov Smile, Cold and Loading Screen Infinity, in the run up to dropping their blazing debut EP HEAVY INFECTIOUS. A bombastic blend of slamming riffs and sickly-sweet vocals, CRASHFACE are a band that will send a shock through the system. We spoke to vocalist/guitarist Charlie Hinton and bassist Otto Balfour all about their musical influences, the EP release and the importance of the visual aspect to a band’s artistry.

So, Charlie and Otto you guys are CRASHFACE. It’s obvious that you both share a mutual love for loud punk music, how did you both come to the realisation that you wanted to start a band out of this passion?

Charlie: I’ve always loved just being as energetic as possible. I don’t really care if you can tell what song we are playing in the old band anyway, I’m just going to be jumping into drum kits. So, I just wanted to try and carry that on with a more refined and more polished project, which is where the idea for CRASHFACE came about. We can still be mental, but these songs can actually appeal to people.

Otto: We played in a hardcore punk band prior to starting this and after we played a few shows up and down the country, we parted ways with that band and went off and done our own thing for a year. Then Charlie came to me with this project idea and it formed into CRASHFACE as we know it now. It involves a lot more creative freedom on this project, compared to the last one because we’re not really trying deliberately to stick to one genre or one sound really, it’s just whatever we feel like doing we do and it’s really refreshing and freeing. It can still be loud and it can still be heavy, that’s the main thing.

Your real noisy hard-rock meets aggressive-punk sounds to me is really reminiscent of a lot of artists out there right now. What kind of artists have had a hand in influencing the sound of CRASHFACE for you both?

C: It’s mostly just My Chemical Romance. It sounds like such a cop out answer, but it’s true. They were the first band I became obsessed with at eight years old and ever since. More recently, a lot of cool solo artists like Phoebe Bridgers definitely, the freedom she has over her songs is just amazing and I try to take from that a little bit. Waterparks also, they are absolutely destroying the boundaries of rock music.

O: For me it took a long time to get into them, but as soon as I got into the understanding of the song-writing it’s Placebo for me. They are one of the most interesting bands, they constantly develop their sound from going from goth icons to doing more experimental pop music, it’s really interesting. Loads of new bands doing it right now too are cleopatrick, their new album is so good.

C: Anyone who doesn’t stay in their box really.

O: Yeah, just keep branching out seeing what’s possible. I like people that go fuck you, this is what we are doing.

Well onto new music now, and you recently released a string of singles including Molotov Smile, COLD and Loading Screen Infinity. The first, Molotov Smile has an immediately attention-grabbing guitar riff to it. As a lead single, did it feel like you wanted to pack a punch and kick off this era of CRASHFACE with a bang like this song does so well?

C: Where Molotov stands to me and the EP, it sounds like this monotonous song that requires so little attention to listen to. There’s not actually a lot going on, but that’s what makes it so simple but so hard-hitting at the same time, you can just jump around and not have to think about shit.

O: It’s like ’90s techno or drum and bass, that’s where the drum beat came from.

C: Yeah, the drum beat came first and that was very The Prodigy influenced, with this steady backbeat that hammers on throughout the track. We just wanted the first one to not think about it too much.

As well as the sonic element to the band, you also focus heavily on the visual, and music videos for songs such as Murder Dream and COLD capture this fashionably bold look CRASHFACE have. How important is it for yourselves to have this balance between the audio and the visual?

C: It’s just another sense that you can tap into in terms of audience. Like what we were just saying about the accessibility of sounds and everything, back 20 years ago you didn’t really have to worry about your image that much because what people were getting from you was your records when they bought it at the store, or you just being at a show and that kind of was it. But now, everyone wants to know every second of your life and they have the technology to constantly keep looking. Artists have adapted to that in such a cool way and finding a way to transfer your signature sound to the visual side is such a cool thing, I love doing it. Just giving people as much eye candy works.

O: Very. At the end of the day, it’s another creative outlet and it’s such an important part of being a band now, defining yourself as a brand. It’s super cool to just be able to express ourselves in a completely different way, I still run my outfit choices past Charlie because he’s ‘fashionable’.

The latest single Loading Screen Infinity has at first this real atmospheric and almost melodic vibe to it, which later bursts into a classic banger of a CRASHFACE song. Where did the obviously different sonic inspiration come from for this one, especially when it’s compared with Molotov Smile and COLD?

O: The name Halloween was the working title for it when Charlie came to me with the riff and we just tried to build on the bare bones of it. It was originally called Halloween and we intended to release it on Halloween last year. Then we just went through a few revisions, it was never quite right and then we ended up wanting to throw the rulebook out of the window to say look, this song has big riffs so why don’t we have this weird atmospheric section, then it builds up into this huge track. It was a really interesting writing process behind this one.

C: I was listening to a lot of Poppy around that time too, so that’s where that dirty sub at the beginning comes in. The song is gritty but then we’ve got the cute keys and synths, so we really liked that contrast.

O: It was super weird in terms of the production and the synths on it because I just bought a new plugin at the time called Portal, I nerd out about music production and it’s this thing that’s like a granular delay and then I got Charlie to put on a bunch of adlibs onto it too.

O: Yeah, it was hugely inspired by Be Quiet And Drive (Far Away) and stuff like that. But the track just sings through it immediately, then I wanted to slap this plugin on it and it created this really big grainy delay and it just completely took you out of the section prior to that, then we wanted it to come back in with a punch.

Of course, all these singles are set to feature on the upcoming EP HEAVY INFECTIOUS. Charlie, you have said that this EP encapsulates the growth you have experienced as a band, so what was it like translating this growth of CRASHFACE throughout the five tracks that make up HEAVY INFECTIOUS?

C: It’s just really the structure of the tracks and how much more adventurous we’ve become in terms of writing. I remember when we set out doing our first two tracks, we went into the studio with the classic rock mindset of here’s the guitars, here’s the bass, here’s the drums and here’s the vocals, let’s record them and call it a day. But now since we have had so much time to sit and really find out what we like in our sound, we have had so much time to grow in that area. So now coming into the EP HEAVY INFECTIOUS, it’s not just guitars, bass, and drums it’s guitars, bass, drums, synths, seven vocal layers, maybe there are some horns somewhere in there, alongside some claps and cowbells. It’s just the perfect representation of how our sound is ever growing and ever changing, you know that’s not to say our next release is going to go bigger, at some point we could just go super minimalist. It’s a testament to the fact that we are not going to stand still in terms of sound.

O: Who wants to release the same song twice? The flow of the EP itself is something I’m personally really proud of. There are some tracks that we have been sitting on before CRASHFACE was even a thing and then there are some that were written two weeks before the deadline we had set ourselves. It flows really nicely; it takes you on a bit of a journey that you don’t know where it’s going next and I think if you listen to it front to back it’s quite special to me.

Lastly, just to look ahead now. As well as supporting Drones in August, CRASHFACE will be embarking on a headline UK tour in November this year, which is massive congratulations! These shows are set to be a statement about who CRASHFACE are as a band in a live setting, so how are you going to essentially present the world to CRASHFACE in real time on this tour?

O: We just had a rehearsal the other day down in Brighton which was really cool, that was the first time we had gotten into a room together in a while and played through all the new material and all the old material. The setlist is curated to be punchy and in your face, it’s going to be loud, it’s going to be energetic, I’m not going to be standing still for a second.

C: There’s going to be a decent mix match in the setlist, I want to try and not play the same setlist for every show. There might be some new songs, there might be some previously unreleased songs, all I am going to say is don’t be expecting the live versions of the songs to be a replica of the studio versions.

O: I’m just excited to be able to gauge people’s reactions. We are going to be throwing our all into this, so don’t forget a towel.

C: I’m not against throwing myself into the drum kit every now and again. Let’s do it!

See the duo live at one of the following headline dates: 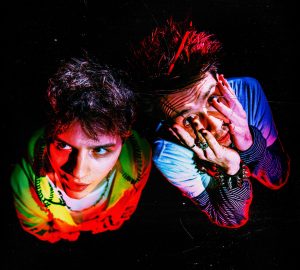