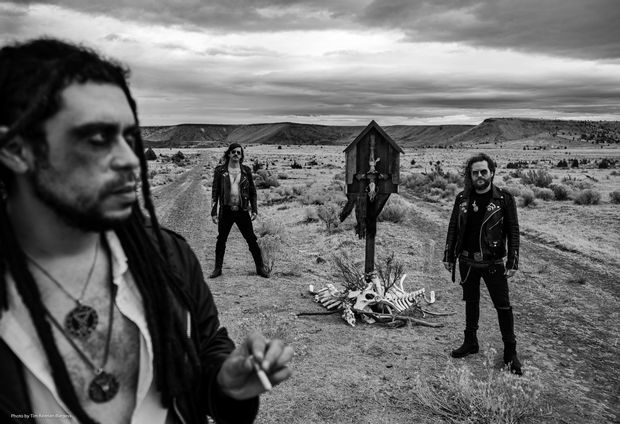 Bewitcher are back with their third studio album Cursed Be Thy Kingdom, cooking up a storm with their raucous blend of heavy metal and rock ‘n’ roll. The trio revealed a video for Electric Phantoms to celebrate the album’s release last month, described by the band themselves as “probably among the purest distillations of what Bewitcher does.” We caught up with the three-piece to discuss their latest single, including the writing process, themes and stories from behind the scenes.

Electric Phantoms is a song on the new record that is probably among the purest distillations of what Bewitcher does. It has all the important elements of speed, attitude, melody and energy that really make up the nucleus of the band’s sound.

The writing process hasn’t really changed at all since the early days. I still compose everything alone going into the demo phase, then once the demos get fleshed out, we rehearse and refine all the smaller, finer details as a band.

The last few years of touring have revealed some interesting truths and realities to us and they are outlined in the lyrics of this song. The title comes from our local band days. A friend of ours who was the promoter for one of our early shows made a flyer and she billed us as the “ELECTRIC PHANTOMS OF DARKNESS”. So years later, it got shortened and used as a pretty bitchin’ song title. Thanks to our pal Mean D Hammerbag for the inspiration!!

The video definitely reflects the energy of the song and the general vibe, but we didn’t use tour footage or anything like that. On all the videos for this album we went for something less “on the nose” to portray a different side of the song, rather than just giving a direct visual representation of the lyrics. It’s always more about capturing the overall spirit of the track, while still delivering something different and engaging from a visual standpoint.

It was filmed at a local studio here in Portland called Falcon, which coincidentally, is where we recorded our first album. We did some other live tracks that same day for a future release that we’re working on, so we actually had two different crews filming us on the same day. One for the Phantoms video and one for everything else. It was a long, very busy weekend haha. Not much time for shenanigans when there’s that much to do.

CURSED BE THY KINGDOM is out now, so what are you waiting for? GO BUY IT FOR FUCKS SAKE!!

Bewitcher‘s new album Cursed Be Thy Kingdom is out now via Century Media Records, available to stream or purchase HERE.