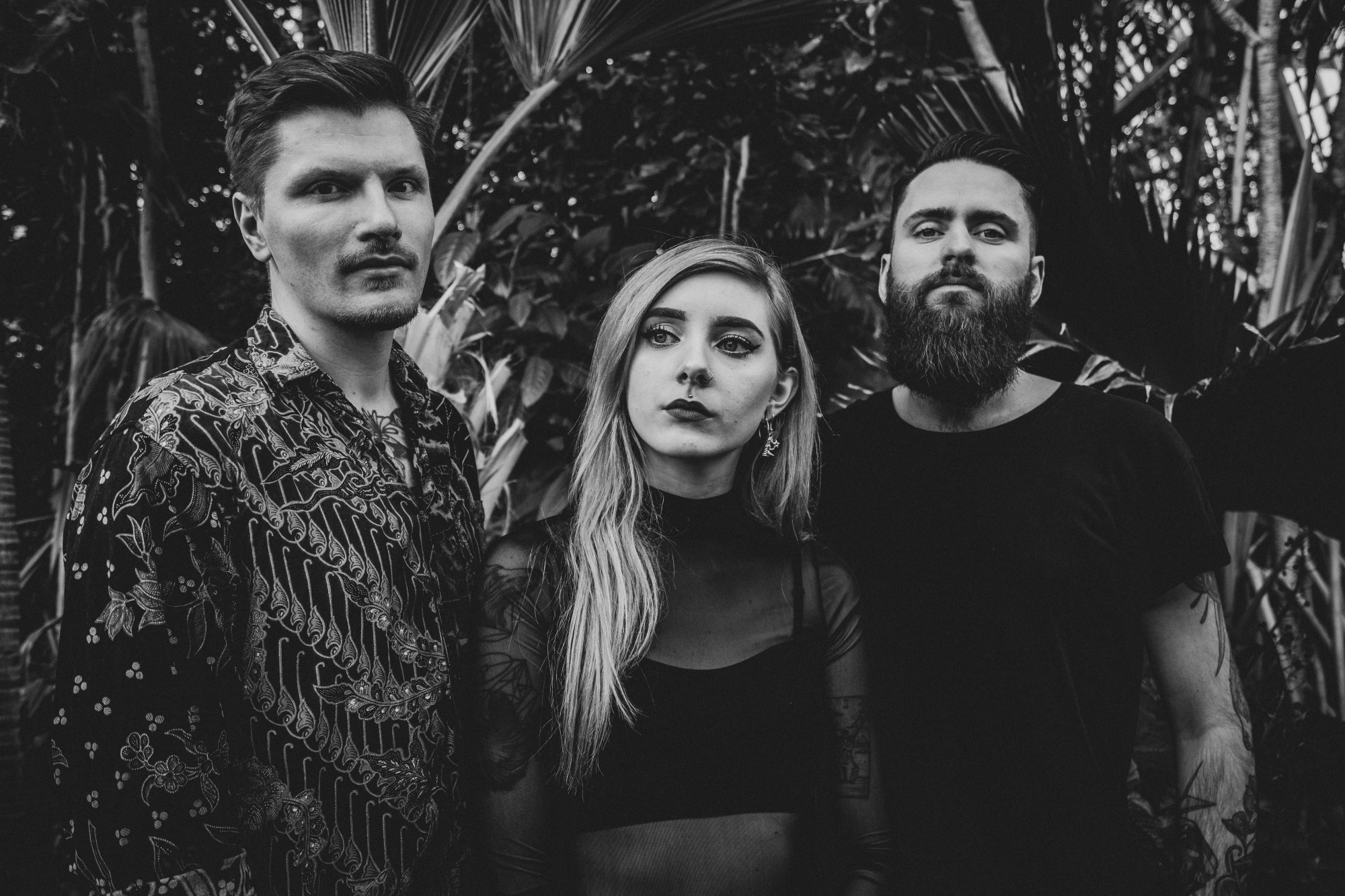 Berlin trio Future Palace have released their hard-hitting debut album Escape, an intriguing mix of rock, post-hardcore, electronica and 80s synth-pop with deep, cathartic lyrics – trust us, you need to hear this. We caught up with the band to chat about their formation, influences, ambitions and more.

Maria: Hi! We’re Future Palace, a three-piece alternative rock band from Berlin that consists of myself, Manuel and Johannes. Our music is best described as a wild mixture of rock, post-hardcore, electronica and 80s synth-pop elements. The lyrics of our songs mostly stem from experiences such as depression and toxic relationships, but also the strength to get out of these situations.

Manuel: I actually met Maria in 2018 when she was recording a feature part on a song of a band that Johannes and I were in. She knew the singer of that band and I was very much impressed by her performance during the recording session. So when this band came to an end Johannes and I were searching for a new vocalist to work with and sing on the songs I had written. After our initial plan to go with a male shouter/singer didn’t work out, I remembered Maria and hit her up. That must’ve been around summer of 2018. Right from the beginning it worked out so well, so we immediately produced what was later to become the first Future Palace tracks.

Johannes: I went to a school in a Berlin suburb where, in nearly every class, two or three bands were formed. One got quite successful for a local band and their drummer was a huge influence to me. I was really into punk and hanging at shows at that time and formed a band when I was about 14-15 without ever having played an instrument. You might imagine what our first shows were like.

Maria: I had already written my first songs when I was about 12. My mom sang a lot and played the guitar – so I asked her to teach me when I was 11-12 as well. I learned the piano at the same time via YouTube tutorials. My family always loved music, and I was constantly singing and dancing with my singer. During high school I was really developing my love for music in my music class where I also started my first band at the age of 14.

Manuel: It must have been around 15 years old when I realised that just listening to music and watching MTV was not enough. I actually loved guitar-driven bands and one of my friends had an electric guitar that he barely played, so I borrowed it and started from there.

Maria: Our main influences, apart from past and present real life experiences, such as relationships and many times getting out of our social and filter bubbles, are other bands like PVRIS, Bring Me The Horizon or The Midnight. We’re very sensitive to what happens around us and try to translate that into our music and lyrics. This could be a concert night out or many years of a relationship.

Johannes: Our short term goal is to promote our debut album Escape and play as many live shows with those tracks as possible. In general we want to go as far as we can go with the band, reaching as many people with our music and being able to constantly put out music that we like.

For those who are yet to see you live, what can they expect from a Future Palace show?

Manuel: Our live shows are all about delivering the feelings that led us to write and record the songs. They could be best described as a melancholic but uplifting journey through our past and present.

What’s next for Future Palace?

Maria: We’ll promote our album release and prepare our own release tour in January and February 2021. After that we’ll hit the road again to support Annisokay on their EU tour. We can’t wait to play these shows!