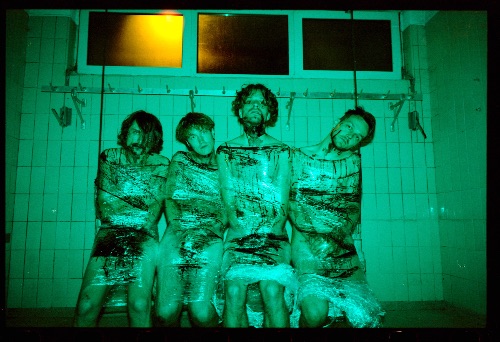 Germany’s Blackout Problems are delivering an important message with their new single MURDERER, one that asks us to “always be peaceful and treat everybody with respect and love.” The track is a powerful introduction to the band’s forthcoming album DARK, which will be released in early 2021 via Sony Music/Music For Nations. We caught up with the band to find out more about MURDERER, including the writing process, themes, accompanying visuals and more.

MURDERER is a first glimpse into the new world we are about to open up with our new record DARK. The song is heavily influenced by electronic music such as Moderat, but also rock elements such as live drums and guitars are thrown into the mix and form a style of music that we like to call dark pop.

The drum pattern you hear all through the song is actually a loop that our drummer Michael played, but we ended up only using the trigger signals and putting them through effects. Although we are not the first people to do this it opened up a different world for us concerning drums, turning acoustic and human feel into electronic elements of our music.

Lyrically the song is an appeal to us all to always be peaceful and treat everybody with respect and love. Also we felt we had to make clear where we stand with all the right wing movements that keep on spreading fear and misinformation on behalf of their political agenda, not only in Germany but all over the world.

Populism and how it works is also a huge topic that we need to discuss. Especially when facts are altered just to match your theory or opinion. This is dangerous territory for all of us and can lead to acts of violence such as the racist attacks in Hanau and Halle earlier this year. Yes it is 2020 and we still have to be united and loud against racism. We can’t be quiet right now.

The video is a summary or a collage of all the videos that will be released with DARK. There is no specific story to follow, it’s just a visual that goes along with the song that can be overwhelming at times. But that is totally intentional. We wanted to shock and have people replay the video to get all the shots. As all the other videos and singles are coming out it will make sense, we promise ;)

Hmm…when you start playing music, nobody breaks it to you that in order to make this a living or a job you have to shoot videos and lay completely naked on a dirty floor outside an old glasshouse for at least ten minutes while it’s freezing. But if that’s what it takes we are all up for it.

Dear UK, we miss you so much. We miss playing shows in your beautiful country. We miss your honest way of saying our pronunciation is a bit off. See you all at Download next year!! Nothing but love for all of you!