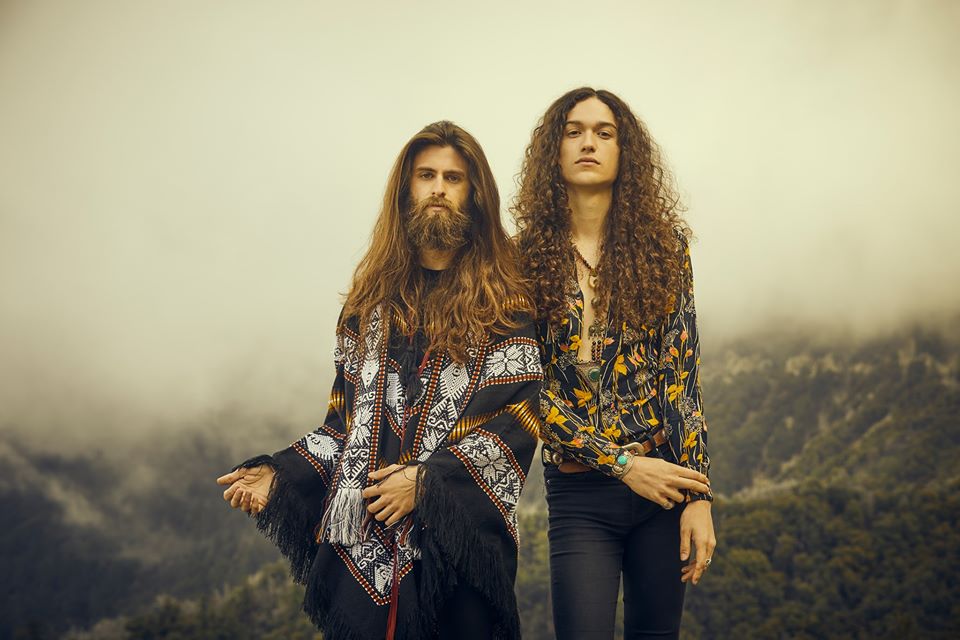 Canadian powerhouse rock duo Crown Lands blend a range of influences from folk and blues to prog rock and psychedelic, pushing the boundaries of what it is to be a ‘rock duo’. We caught up with the band to discover more, including their first musical memories, their love of Rush and inspiring others to do good.

We started Crown Lands five years ago. It started with sweaty jam sessions in our friend’s barn.

Kevin: The desire to write music came as soon as I started playing music. I always wanted to write a song someone else would want to learn. I took music very seriously in school and tried to learn as much theory as I could. Music theory is a language within music and is key when communicating an idea.

Cody: I realised I wanted to make music around the first time I saw my dad’s nightly drum sessions before I could even speak. I started writing music when I stopped being a solo drummer and formed my first band in my teens. I then went on to study Afro-Cuban and West African Drumming in university for five years.

Rush is, and will always be, our favourite band of all time. They are the best. I know we talk about them a lot but their influence can’t be overstated. The way they have conducted themselves with such class and poise over the years is remarkable. They weren’t a sex and drugs band. Neither are we. We are about the music and the music will always come first. After that, we love Led Zeppelin and Queen. We aren’t a classic rock worship band, despite what out influences may tell you! We definitely honour the past and where we came from, but we are looking to the future and we want to push the boundaries of what a ‘rock duo’ really is. We are just two people who love music and want to make the music that moves us inside.

Social justice and reconciliation is something we hope to shine a light on with our music and actions. We don’t profess to have any answers, but we want to raise questions that our audience will hopefully then go do their own thinking and research, and in turn make a difference in their lives. It all starts in small numbers before a real movement can grow. We’ve seen our audience grow over the years and it’s nice to see that we haven’t really alienated anyone with our political messaging. It’s a beautiful reminder that our fans and our friends believe in a lot of the same things that we do, which at its core is mutual respect, understanding, compassion, and action for those who are marginalised. At the end of the day, we want to move people with our music and our words. We want to do good, and inspire others to do good.

For those who are yet to see you live, what can they expect from a Crown Lands show?

A very loud and fun show with dynamics. As loud as we get, we can go just as quiet. It’s all about the push and pull. We try to inject a lot of spontaneity in our shows with improvised intros and interludes, but we also try to honour the songs as we recorded them. We do our best to recreate the special moments from our records as authentically as possible. We recorded the songs the way did for a reason, so we try to recreate it as closely as possible without any backing tracks or trickery. Sometimes it feels like a circus act with how much multitasking we have to do. Cody somehow never runs out of breath despite drumming and singing, and I spend the whole set precariously balanced on one foot, playing keys with my feet while playing guitar or bass. It’s a lot of fun to play, and we hope it’s almost as much fun to watch.

What’s next for Crown Lands?

We’re building a studio right now to be able to work on new music. It’s been a long time coming! We’re excited to finally get all of our gear in once space and create on the spot. Sometimes it’s hard to feel creative when the clock is ticking and you’re spending money. It’s been hard to find time to write after spending so much time on the road. This downtime has allowed us to reflect on what we want to express as a band both musically and conceptually. The next record will be a more experimental record for sure.

The duo have recently launched their Letter To The People newsletter, giving the band the opportunity to speak directly to their fans. You can sign up for the newsletter HERE.