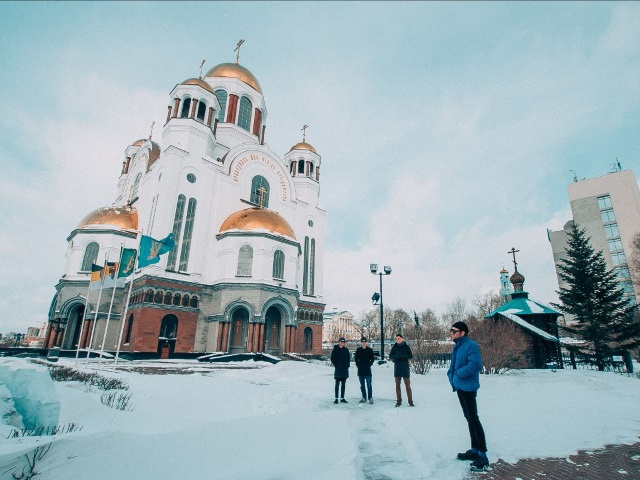 Enter Shikari have released Further East, a tour documentary shot during the Russian leg of their Stop The Clocks tour in March 2019.

The band played eight shows in Russia over a two-week period, which included visits to Nizhny Novgorod in the Volga region of the country and Krasnoyarsk in Siberia, as well as Moscow, St. Petersburg and more. During their visit Enter Shikari also appeared on Russia’s prestigious Evening Urgant TV, as well as walking on frozen lakes in Irkutsk.

“We always look forward to playing Russia as the fans are always so fantastic,” comments drummer Rob Rolfe. “We had so much fun on this tour. It was wonderful to see old friends, and make new ones, in places like St Petersburg, Moscow and Ekaterinburg, and it was a great to have the chance to visit cities we’ve never been to before.”

The documentary, which was filmed and edited by the band’s tour photographer/videographer Tom Pullen, is available to stream HERE.

“It was wonderful to visit new places in Russia and still receive such a warm welcome,” adds frontman Rou Reynolds. “The shows were so exciting, and visiting places like Lake Baikal was exhilarating. I hope our love of the country and it’s people comes across in Tom’s film, and of course we hope everyone enjoys it.”

Enter Shikari have a handful of live dates confirmed over the next year, dates are as follows:

VIDEO NEWS: [spunge] Release Video For New Single ‘No One Said It Was Easy’