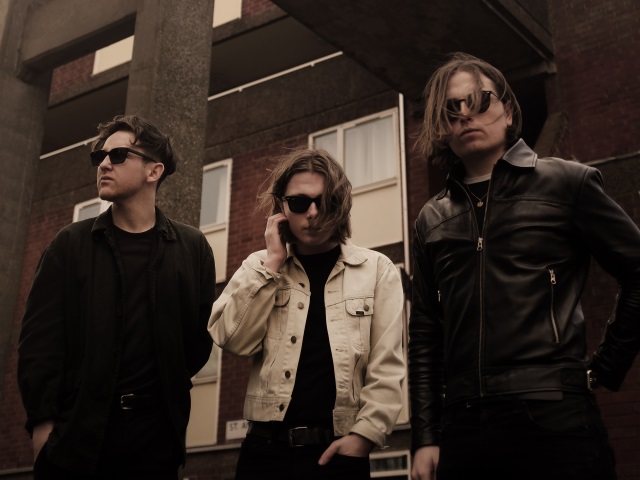 UK rock trio The Pale White have rapidly gained attention with their thunderous, hip-shaking music and magnetic live shows. The band’s latest offering, Unnatural, is a rock ‘n’ roll anthem that comes packed with powerful vocals and infectious swagger. We had a chance to sit down with the band in the midst of their southern UK tour to talk about their latest release, tour life, their career so far, future plans and much more.

Hello! Welcome to Bring The Noise. How have you been doing this week?

Hello there. We’ve had a properly class week, thank you for asking. We’ve been away on the southern leg of our UK tour the last few weeks and it’s been absolutely amazing to see so many people coming out to see us in towns we’ve never played in before.

We’re loving your single Unnatural, where did the idea for this track come from? Are you enjoying the response from your fans?

Ah cheers! We’re very proud of it. It’s been going down really well live since we first started playing it when we toured with Sam Fender in Europe a few months back. People have been singing it back to us on this tour and that’s always a really good feeling to see a new song connecting with people. The song is framed through the eyes of a sociopath’s worldview and unwaveringly confident mindset.

How did The Pale White come about? What’s the story behind it?

Adam and Jack are brothers and bonded through their shared tastes in music from a young age. Adam and Tom had played in separate bands over the years and kept on crossing paths. We all wanted to bring an energy, melody and live presence that we felt was missing at the time in our hometown. After trying to recruit another member to join, we just ended up as the three of us writing songs in a freezing cold noisy practice room. No one else had the chemistry and passion that the three of us shared for what we were doing…so we soldiered on together and have continued to build from there.

Hailing from Newcastle, what’s the music scene up there? Do you feel inspired while producing from the kind of music you grew up on?

When we first started The Pale White the scene wasn’t in great shape…but now it’s thriving and starting to turn heads nationally. The North East is probably the most under appreciated and overlooked scene in the UK. It’s obviously the home of our friend and superstar Sam Fender, but local favourites of ours include; Feva, The Old Pink House, Fever Days, Callum Pitt, Plaza, Avalanche Party, Pigs X7 and A Festival, A Parade.

Who are your major musical influences – dead or alive? Have these influences changed over time?

We’ve always drawn influence when writing and crafting songs from bands like Interpol, Pixies, Queens of the Stone Age, Nirvana, The Black Keys and Band of Skulls, but you can find influence from all sorts of different surprising places. We’re all partial to artists ranging from Hot Chip to Scott Walker…you never know when someone’s influence might creep into your music.

You’re quickly gaining a strong reputation for your live show, is that something you’ve been aiming for in the long run?

We feel like it’s our duty to put everything into our live shows. It’s truly humbling that people have paid money to come and watch us play, so it only feels right that we put our everything in to that. Blood, sweat and tears (all of these happen more often than you’d think).

Which new acts have you got your eyes on? Are there any recommendations we should check out?

Most indie music fans are probably aware of them by now, but we’re all into Fontaines D.C. They were great at Glastonbury and their debut feels like a future classic debut. A London based band called On Video opened up for us on a few dates of our headline tour recently and they really impressed us. Expecting to hear big things from them in the coming months. Think Vampire Weekend if they were raised on a diet of scuzzy garage rock.

After a sold-out northern leg tour you’re heading out for the southern UK tour. How do you prepare for touring? Does it feel nerve-wracking when you get on the stage to play in front of so many people?

We’re in the middle of our southern UK tour run right now. It feels unreal to be out playing to fans new and old. We don’t really get nervous because it’s where we want to be. Playing shows for people who care about this as much as we do. It reaffirms our belief in what we’re doing seeing people be so passionate about what we’re doing. You can often feel like the underdog up north, but we plan to change that over the next year.

So what’s next on the career bucket list of The Pale White? Any exciting projects that you’re currently working on?

We’re starting to slowly piece together our debut album and it feels incredibly exciting to have gotten to this point. We feel like people are going to really like it. It shows a few different sides to what we do as a band. It feels really varied. So we’ll be  teasing tracks from it over the coming months and playing shows as much as we can up and down the country. It’s all go from here.