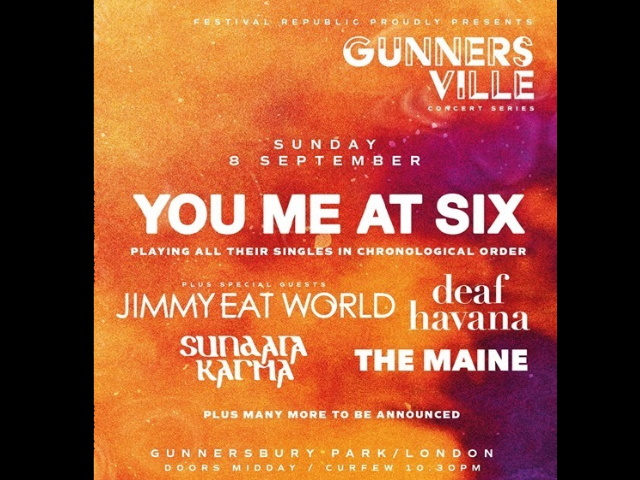 Gunnersville Festival set in the surroundings of Gunnersbury Park, London made its debut earlier this month and in the process sent off festival season with soaring success. The stage set under a big top tent played host to Sunday headliners You Me At Six who stuck it out strong through a two-hour setlist, rattling off the entire repertoire of the bands singles all performed in chronological order. Supported by a stellar line up including Jimmy Eat World, Deaf Havana and As It Is who were amongst the array of artists leading the line-up over the September weekend.

Getting Gunnersville off to a grungy start, Gloucestershire group MILK TEETH took to the main stage to shake up the small scale, die-hard dedicated audience, rolling in for the festivals first act. Kicking things off with Vitamins, bassist/vocalist Becky Blomfield’s gritty vocals boom through the pulsating and pounding drums, as the track transforms and erupts to build into an instrumental bridge explosion of bass lines and whirring guitars. Taking the tempo down a tad, Swear Jar simmered the mood for a moment, as the band coaxed the crowd to whip out lighters and phone flashlights, lightened by Blomfield’s comments encouraging everyone not to set alight to surrounding individuals in the process. Before firing up the ferocity for closer Stain, with its heavy sound influence and gothic natured lyrics sending out this self-proclaimed gross pop trio’s time under the tent tumultuously. 7/10

Marking the final festival farewell to The Great Depression era, Brighton based band As It Is stormed onto the stage, embellished in their black and red getup. Glaring out to the crowd, the collective commanded the tent with audacity and authority. Putting on a performance that put their most daring record to date The Great Depression directly at the core of the setlist, the pop-punkers showcased songs including single The Wounded World, led by the band putting on a visual demonstration raging full of angst towards the devastation and destruction the world is facing in this current climate, as a sea of firsts from the audience all the way up to As It Is were raised and ready for battle. Deep cut The Question, The Answer opened up the mosh pit the moment Patty Walters stated “This is the heaviest song that’s going to be played all of today”, to which Walters screamed vocals, mixed with a brazen blend of pounding percussion performed by Patrick Foley and sharp guitar riffs from Ronnie Ish which didn’t disappoint. 8/10

Riding high after the release of their recent record Rituals, alt-pop reinventors Deaf Havana’s new-found sound for synths and electronics surfaced on their evening slot on stage. Staying on the conceptual themes of one-worded track titles denoting to the notion of religion, songs Hell, Holy and Sinner were the setlist standouts from the quartets Gunnersville debut. The first, Hell is set amidst a deep pink haze of light, quite the juxtaposition to the title of the tracks dark demeanour. The second, Holy amped up the audience participation, with James Veck-Gilodi’s infectious vocals inviting the crowd to echo back its deceit themed lyrics. The third, lead single Sinner saw sleek synth sounds and catchy vocal hooks send of Deaf Havana’s setlist, one over-flowingly full of ethereal pop anthems. 8/10

Bringing a melodic flavour of Arizona over to the grounds of Gunnersville Festival, American rockers Jimmy Eat World drew upon their extensive nine album discography to deliver constant crowd pleasers after constant crowd-pleasers. Their set put into perspective the monumental culmination of the collectives material, spanning over the course of the band’s mammoth two-decade career. Taking core classics Pain and The Middle, a new track debut called Criminal Energy being the first slice of a new song ever since 2016 album Integrity Blues and a live collaboration for Hear You Me with You Me At Six’s lead guitarist Chris Miller. By the end of their twelve-track set, Jimmy Eat World’s festival-friendly singalongs had surged up the atmosphere in the big top tent for the headliners soon to follow. 8.5/10

As a band who have risen up the rock ranks to become a renowned staple amongst the scene, You Me At Six’s milestone headlining slot was marked by the band performing all their singles in chronological order. A deep dive down the group’s discography, YMAS exclusive two-hour set took twenty-seven smash-hit songs, spanning from Save It For The Bedroom to Straight To My Head. Yet the set wasn’t without its mishaps and mad moments, from Sinners Never Sleep song Loverboy featuring a near miss from frontman Josh Franceschi finding himself up in flames amongst the fiery stage pyro, to new era number What’s It Like where Franceschi fired up the energy levels one last time seeing him confidently crowd surfing. You Me At Six’s set spiritedly sent off an indie-rock filled Sunday at Gunnersville Festival and said hello to a new era in the career of this five-piece cohort. 9/10

VIDEO NEWS: Will Haven Release Video For ‘Winds Of Change’