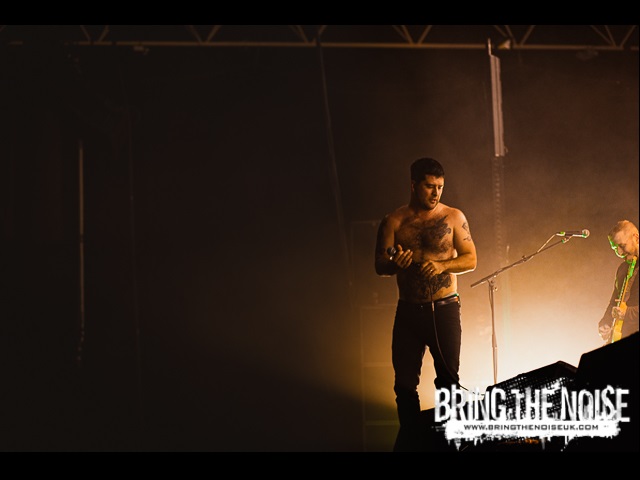 Toronto’s Alexisonfire had been quiet for most of 2018, but since the beginning of this year they have already sent shockwaves through the industry and fans alike with the release of Familiar Drugs, a thunderous grungy-stoner rock belter. Following that was Complicit, a fast-paced and punchy rock anthem almost perfect for a car chase scene in an action movie, which came out at the end of May. The band have already taken 2019 by storm, and at the foot of it all, the future looks bright for the new and revamped Alexisonfire.

Joined by Chastity and Child’s Pose, Alexisonfire’s resurgence into touring was met with a scorching hot reception, both in weather and vibes.

Starting the evening’s festivities were Child’s Pose, who were sadly not on stage for very long, clocking in at just over 10 minutes in set time. Due to the vast majority of people soaking in the blazing sunshine or hanging in the bar area, or queuing to get in the venue, there was no chance to see them. By the time it got to 7:15pm they had already finished their set, meaning few got to see what they were capable of. Better luck next time. N/A

The main support slot came from fellow Ontarians Chastity, the brainchild of Brandon Williams, who according to their website are “a stand out temperament in punk.” If that is meant to describe semi-awkward banter about Theresa May in between songs that aren’t hitting home, then that’s bang on the money. Chastity have the tools to do well live, and it’s clear from their musicianship and technical ability that their foray into punk, indie and millennial rock is a good effort. However, the crowd is full of nostalgic Alexisonfire fans who came to see a medley of ragers and aggressiveness, and Chastity were sadly just in the wrong type of environment. A shame really; when their music did pick up the pace and show glimpses of life, it was never truly capitalised on, even though it was semi-entertaining and well composed. 4/10

Little over 30 minutes later and Alexisonfire grace the stage with full force right from the get-go. Without the need for long-winded intro tracks or snippets of political speeches giving that sense of “we’re angry at the world today” that permeates most bands nowadays, Alexisonfire burst straight through the gates and start scorching the earth with Accidents. The songs flowed seamlessly, and only appeared to increase the energy in the venue as every second passed. The heat intensified and more bodies flew over the barrier by the minute, and Alexisonfire were visibly enjoying every moment of it, as you could tell by George Pettit ripping his t-shirt to fragments little before Accidents even finished.

With the god-tier bangers that came later in the set, namely This Could Be Anywhere In The World, Young Cardinals and Dog’s Blood, the crowd savoured every moment and bellowed out every word in unison with Dallas Green, who was notoriously on point as expected. Even in the latter stages of their music careers, Alexisonfire exemplify passion and energy that could be an example to younger bands making waves in post-hardcore and punk, and they have the skills vocally and musically to back it up. The whole band went all in with their set, everything just clicked perfectly and judging by gig-goers whose first or tenth time seeing the band were not shy in exclaiming that Alexandra Palace was where Alexisonfire truly shone. Here is hoping they return very soon! 10/10