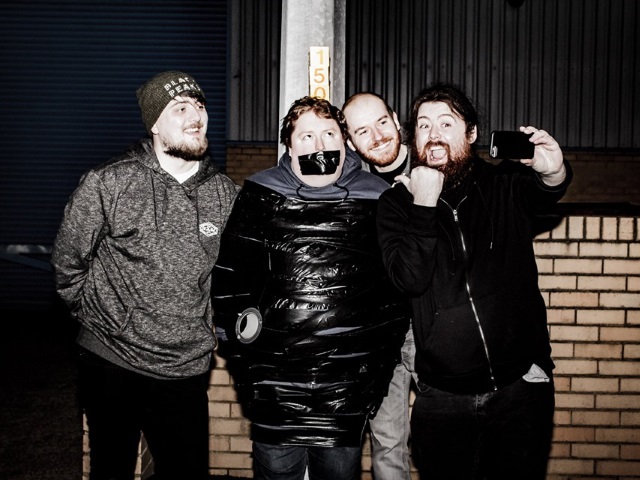 After playing as MC Lars’ backing band and supporting him on tour, there is a lot riding on this debut Ruled By Raptors release. Ouroboros is a brave debut; work started on the record when members of Ruled by Raptors were a post-hardcore band called Digits, then it was completed after their disbanding. Whatever the back story this is a release packed with potential and excitement. Comparisons have already been made with British rock stalwarts Hundred Reasons and Biffy Clyro, but they are just the tip of an iceberg collapsing under the pressure of each and every influence within this release.

The EP opener Braggart combines a very specific era of Reuben guitars (Very Fast Very Dangerous) with rolling drums to create the perfect backing for a display of vocal prowess. The range on display is astonishing, there are guttural growls which switch effortlessly into the almost spoken delivery of Billy Talent, before long smooth vocals push the song towards the commercial sound of You Me At Six or similar. This contrasting set of vocal styles may sound like one clash too many, but with their considered approach to song writing every progression is delicately led into the foreground with clever musicianship.

The musicianship and song writing continues to fascinate as the EP progresses with Promises, the complicated musicianship would be at home within an instrumental genre. Basslines stitch the gaps between guitar parts that soar playfully in and out of breakdowns, all the time leading back to vocals. In this instance the switch between brash gang vocals and delicate emotion seems to cover the entire career of Frank Turner with Mongol Horde’s venom, the delicacy of his most morose solo work and the variation of Million Dead.

As the themes continue into Dux there are a whole new set of influences. The heavy bassline is once more the thread to hold the track together as vocals twist between the building power of Sparta and the raw emotion of Desa. The guitars work a path between nu-metal and tech punk and as the breakdown takes over the song there is a moment of delicacy which leads into the building chorus. This musical journey is directed between drums and bass and there is something very clever about how each lead into and out of the vocals.

With an acoustic start this is a release that ends strongly, Time shows a softer side to the vocal delivery. This effortlessly builds emotion with the help of backing vocals and musicianship, until the vocal outpouring reaches a powerful level. The acoustic guitar returns to close the EP and feels like a welcome moment of reflection, because amongst the fascinating musicianship and composition hides some deep, personal lyrics.

Often when a band combines contrasting musical styles there is something lacking, in this case the contrast seems to drive their composition further. With each contrast there is a build-up or a pathway leading in to it that allows it to blend into the song effortlessly. This is almost indescribably good musicianship that has been pushed even further with meticulous attention to detail.

Hopefully it’s time for a revival of the charting British rock of the early noughties; if there is a band to lead the charge it will be Ruled by Raptors.