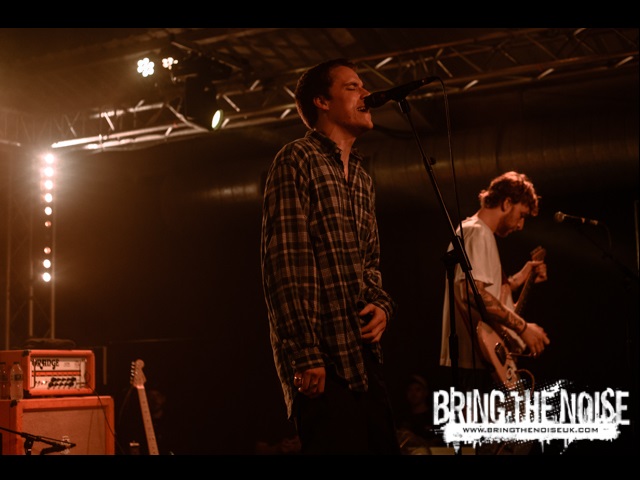 On the final date of their tour in support of latest album Proper Dose, The Story So Far brought All Get Out and Citizen along to Southampton’s Engine Rooms. When TSSF previously visited Southampton in 2013 they quite literally nearly brought the roof down at the Roxx, here’s hoping it’s a little less wild this time and that the roof survives!

American indie-rock outfit All Get Out opened tonight’s show. With their new album, No Bouquet, set for release at the start of November it was the perfect chance to win over some new fans and highlight some of their unheard material. Vocals from Nathan Hussey were raw, passionate and sung with belief behind every word accompanied by aggressive guitars. Sadly tonight’s crowd didn’t invest in the band, despite their energetic onstage performance. Perhaps it was the first time seeing All Get Out for many, but we have a feeling it won’t be the last. 6/10

Citizen are a band who don’t have this problem and it’s a sing-along fest from the word go. Opening with Roam The Room the first crowd surfers of the night made their appearance for the emo-rock filled set. Bringing a mixture of old fan favourites and newer material it was the perfect combination to really kick the night off. Providing an impressive genre mix with some grunge, rock, emo and punk thrown in for good measure, they also stripped it back with Sleep showing off a different side. Closing track Jet saw every last bit of energy used up, sweat dripping from pretty much every surface in the venue (including the ceiling) and Citizen realised they’d just won over everyone in the room. 8/10

From the moment Parker Cannon walked on stage shouting “NICE ONE BRUVA” (repeated more times than we can count throughout the night) everyone knew The Story So Far were here for a party on the last date of the UK tour, and the crowd were too. Throwing themselves right into the chaos with Nerve the crowd went crazy and the crowd surfers took to the air, before diving right into Proper Dose, the title-track from their latest album, which obviously the crowd knew every word to.

Performing a set of material both new and old they also fluttered with the tempo of the set. Slower tracks including Upside Down (which was complete with lighters in the air) were matched with rowdier efforts like Let It Go. The Story So Far have longevity, their older material is as loved as their new tracks, which was evident with Things I Can’t Change and Quicksand. Throughout the set the band, especially Cannon, apologised for their vocals not being great and for them being rough around the edges, but honestly? Nobody could tell.

Since the release of their debut album Under Soil And Dirt in 2011 TSSF have gone from strength to strength, remaining loyal to their pop-punk sound. The sold-out show saw finger points galore, pits opening up at every instance and crowd surfers not giving security a moment to breathe. Their latest release is their most experimental and sees the band performing at their strongest, they are even more at home onstage and although this might be the end of their tour they were going to go out with a bang. Credit to them for giving a shout out to local promoter Ricky Bates and Joiners Live; known for helping to build Southampton’s scene to what it is today.

Closing with Clairvoyant it was a magical way to end the night, slowing everything down and leaving the crowd happily in awe. Hauntingly the last lyrics of the night were “Don’t paint me black when I used to be golden,” and these rung in everyone’s ears as they stumbled out onto Southampton’s streets. The Story So Far performed as if they had something to prove, and tonight they proved that pop-punk still lives on and they really are pioneers of the genre.  9/10

Tags : All Get OutCitizenEngine RoomssouthamptonThe Story So Far
previous article