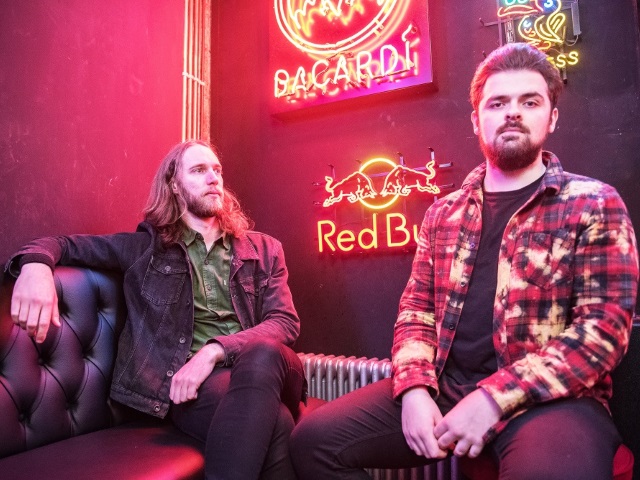 With the recent release of their EP Strangefruit, rock duo Rival Bones gear up to play a handful of shows next month in support of the new record. We caught up with the band to hear their top tips and stories from the road.

James: Laughing in the car!

Chris: Getting to meet so many new people and reach a new audience. We’re not really at the point yet where we have a built-in audience in every place we play, so there are always lots of people to indoctrinate!

J: Being on tour is mostly travelling and waiting around. with some “carrying stuff” and “maybe playing some music” thrown in. Being on the road is about getting pleasure out of the small moments and I’d say that the “negatives” I’ve mentioned are definitely more or less so depending on how good the gig was.

C: Similar to James, the waiting around can sometimes be a bore. Although, me and James always have a laugh when we’re sat around so I can’t complain that much haha. Service station toilets aren’t great that must be said.

J: Music, snacks, satnav, a good laugh and knowledge of the nearest Wetherspoons to the venue.

C: Music, fruit, in-car phone charger, underwear, someone who can make you laugh (and you can put up with for hours on end in a car)

J: Music and racing. I race go-karts at a tiny level and plenty of Sim racing but nothing beats playing music.

C: Going to the gym, playing PS4 and listening to music 24/7. There’s always some form of music being played in my flat.

J: We did a show for the Rock Society of Lancaster University recently and it was the best show we’ve ever done. The crowd that night was absolutely incredible!

J: It will definitely have been on a car journey on the way back from a gig at 2am and that’s sacred time so I couldn’t possibly say…

C: Travel time is usually hilarious. Me and James have a number of games we play to pass the time and there’s been many times were we’ve had tears streaming down our faces and nearly crashed while driving.

J: We did a show in Southport recently and my pedal board died mid-set and I just sat there for 10 minutes trying to fix it…not great.

C: We played The Great Escape and we had the stage shut down because of how loud we were which is pretty rock and roll, however it was also embarrassing for us because all of the other bands after us had to play stripped down acoustic sets…

J: Meeting Joshua Homme from Queens of the Stone Age when we played at a festival in Croatia with them this summer.

C: I have to agree with James. Meeting the whole QOTSA lot was outrageous. Life changing and made us move up a gear.

J: Sitting in a bar is Seoul (South Korea) after being out all night with the police banging on the door because the music was so loud.

C: We were recently in Paris and we played a boss gig and we got hammered after it. We ended up back at the promoter’s flat in some random suburb of Paris with all his mates, his two dogs and a load of alcohol ’til like 5am. It was heavy.

J: We put a limited edition release of our new EP up for presale and it sold out in two days. That was immense!

C: Being chosen to go and play over in South Korea was pretty huge for us. It was an honour to go over and show them what British music is about and we had a boss time as well!