MUSIC INTERVIEW: Life On The Road With…Courage My Love 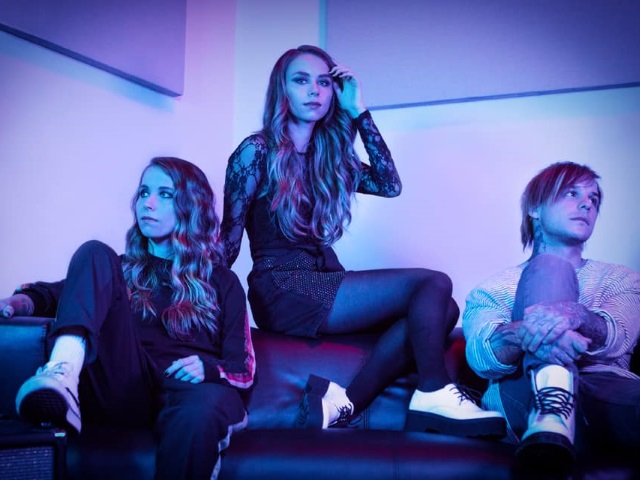 Having recently released their single Remission and soon to tour the UK with As It Is, we caught up with Mercedes from Courage My Love to hear her top tips and stories from the road. From the most memorable to the most outrageous moments, here is what she had to share…

Our favourite thing is definitely getting to meet our fans all over the world. It’s really rewarding after all the weeks spent writing and recording in a studio to finally play our songs live for people who enjoy our music and actually get to talk to them after and hang with them! We’ve made so many amazing friends that way.

I mean, just speaking for myself personally, spending long hours driving isn’t always fun. I am the type of person that needs to stimulate my brain at ALL TIMES, so those hours spent in the van driving give me way too much time to ponder and drive myself crazy. I’ve started writing a lot on those drives whenever possible. Lyrics, short stories, poems, anything to keep my mind active. But sleep is also a good way to pass the time!

Sleep, a comfy hoodie, water (obviously), a tour game and a tour theme song. Every tour it seems there will be a song that becomes the theme of the entire trip. We don’t always choose the song. The song chooses us.

The time we spend on stage passes in the blink of an eye. I feel like most of the day leads up to the moment we walk onto that stage. Before we play we try to explore wherever we are, even if it’s just to run and grab coffee or food after load in. It’s important to get a sense of where you’re about to play, so we just try and do what the local people there do.

I think a moment that will always stand out for me is the first ever show we played in Tokyo, Japan. I was expecting no one to know who we were or any of our songs. I was expecting there to be a tiny little crowd. I’d heard the crowds over there are polite and quiet. But I was so surprised to see about 500 people there, full of energy and singing our
songs back to us from the very first song all the way to the end of our set. I’ll never forget that as long as I live. I think that was the moment that really validated our career choices for me.

There are SO MANY of these on tour, but one that always sticks out to me is a show we played in Akron, Ohio where I tried to look all bad ass and do this hair flip, only to have it get caught on one of the overhanging speakers above me and stay STUCK there for half the song. I finally had to just yank it out so I could get back to the mic. I was looking at the crowd and wondering why they all kept looking up towards the speaker, so I looked too and to my HORROR a huge chunk of my hair was still up there hanging like a pelt blowing in the breeze. Definitely hilarious.

This moment lives in infamy, but way back at the beginning of our career when we played our first local headline show Phoenix fell off the drum riser mid song. She’s never been able to live that down since.

One of the moments that outraged me the most was also towards the beginning of our career when I got kicked out of our own greenroom because the security at the venue didn’t believe I was actually in the band! As I was trying to explain, they said “WITH the band and IN the band are two different things”. Even after I pointed to my face on the poster they wouldn’t let me back inside until I finally called our bass player and got him to explain. That was just the beginning of sexist security guards we would encounter.

The first ever show we played in Germany was the most insanely drunken crowd we’ve ever had. People were climbing up on this tiny stage with us, grabbing my mic, jumping back into the crowd, just going NUTS. After the
show the promoter offered to take us out to this cool “pub” and being our first time in Germany we were all very eager to check it out. After walking and taking the streetcar for what seemed like hours we started getting a little wary of where this guy was actually taking us, but we followed him anyway because without him we would be completely lost. Finally when the birds started chirping we got to the “pub” to find out it was this crazy underground rave. There were maybe five rooms, all with different music playing from super intense drum and bass to trippy heavy beats. We met up with our cousin and his wife and were drinking with them until the sun came up. After that we had to take the streetcar back and almost got kicked off because the promoter was so drunk he couldn’t sit up. It was definitely an experience I’ll never forget! Germans know how to party.

Every tour has it’s rewarding moments. There is no better feeling in the world than going to a new city and hearing a crowd sing your lyrics back to you. It’s magical. I still get goosebumps every time. Meeting people who tell you that your songs have gotten them through rough times or even saved their lives is completely mind blowing to us. It’s really hard to pick one definitive moment because they happen on pretty much every tour we go on. We are insanely lucky.

See Courage My Love live on tour with As It Is at one of the following dates:

Tags : As It IsCourage My Love
previous article

VIDEO NEWS: Memphis May Fire Release Video For ‘The Old Me’