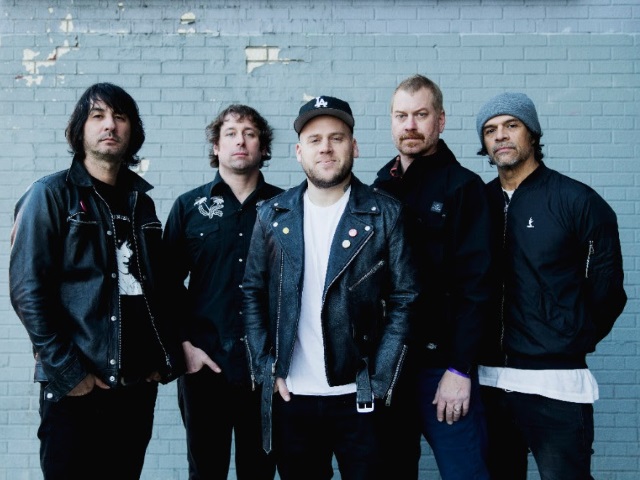 Ahead of their slot on The Pit stage at Reading Festival 2018, we caught up with Joby J Ford and Matt Caughthran of The Bronx. Due to head out on the Fireball Tour later this year, they’re showing no sign of slowing down as 2018 comes to a close.

You’re playing The Pit later today, do you have high expectations of it compared to Leeds?

Matt: Of course! I always choose Reading when it comes to Reading and Leeds. Leeds is great for club shows but Reading is best for festivals.

You’re on The Fireball Tour with Flogging Molly and more later this year, what can fans expect from the shows?

M: The shows are going to be amazing so you can expect excellence. It came about because we’re all friends and friends like to play shows together.

Let’s talk more about your new album The Bronx V, what’s the case with the album’s real name as there’s a whole lot of confusion online?

M: Yeah, it’s just called The Bronx V. People have been confused by the artwork, it’s just a roman numeral.

Can you tell us some more about the recording process?

M: We did it in LA with Rob Schnapf a good friend of ours. It took about six weeks to bash the whole thing out. It was probably the smoothest Bronx record we’ve ever done. It was a lot of fun as we had a lot of time beforehand just working on the songs and getting everything where we wanted it to be. Then go into the studio and knocked it out.

From your back catalogue what would be one of your favourite or most relatable lyrics?

J: There’s a line in one of the songs where he says “beach cruiser in the city” and I really like that. The irony and the juxtaposition, it’s extremely California. Extremely kind of, if you could sum up our band it would be just like that.

What would be your festival anthem since we’re here at Reading today?

M: I don’t know what song it would be from a band that’s playing here but you know that Vines song that goes “I’m gonna get free”. That song is SO awesome. A song of ours which makes people go crazy would probably be Knifeman, Heart Attack American. One of those two always get the party going. Shitty Future is another one. Six Days A Week, they’re always rowdy tunes.

Last but not least, what’s coming up for you the end of this year and the start of next year?

M: More of the same, more touring, more music, more recording. Eventually, we’re going to get another Bronx record done. Then we’ve got another band Mariachi El Bronx and we’re gonna go down that road eventually sometime in the next couple of years. Lots of touring, lots of writing, lots of recording.