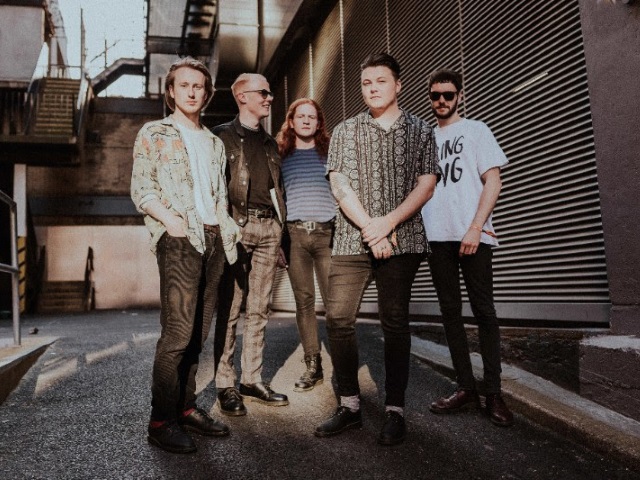 We sat down with Benji Inkley (vocals) and Paul Howells (guitar) of Fizzy Blood at Reading Festival 2018. It was a great chance to find out more about their Pink Magic EP, the Reading vs Leeds debate and their anticipated debut album.

You’re playing the BBC Music Introducing Stage later today at Reading Festival, how are you looking forward to it?

Benji: Very, very much so.

Paul: I dunno if we can say too much about that. It’s going to be good. It’s nice because last year we were on a slightly bigger stage and it was in a tent. This year it’s smaller and it’s outside but it’s a year on. I’m kind of hoping because it’s smaller than we did last year and the turn out was good then it’s going to be a sweaty rammed one.

B: A sweaty, outside, rammed one.

Leeds is pretty much home for you, but how does Reading compare?

B: People from Leeds don’t hate me. But I think the way Reading Festival is laid out, I prefer it. don’t get me wrong I love Leeds and I’ve been to Leeds more times than I’ve been to Reading but first time coming last year and this year coming again, walking around the festival and it being in the city itself. So you can just nip out and get some supplies or whatever it’s a lot more convenient but on the atmosphere, I think, well Leeds may top it tomorrow.

Controversial and keeping the Reading vs Leeds debate alive! Can you tell us a bit more about your new single Strangers? We’ve picked up on the feelings and desire to not stick to a genre but do you feel the industry in a way forces that on a band?

P: Yeah definitely. We’ve experienced some of that ourselves. But I think it’s up to you to say, can I swear? [BTN nods] Fuck it. it doesn’t matter. Nobody cares. Some of these kids posting on Twitter saying they’re going to come and see us, they’re going to go see Post Malone and go and see whoever. They’re completely different genres and you’ve got to realise that now in the age of Spotify people just find music, they don’t listen to it because it’s part of a subculture or that’s like in the past. People like what they like and it doesn’t matter what genre it is so why should we stick to one?

What would be your favourite or most relatable lyric you’ve written?

P: That’s really hard it’s like choosing your favourite kid. Er, I’m gonna say. Honestly, I really can’t answer that I’m sorry. Sorry, I can’t give you a good answer to that. I’m always writing more lyrics. Some of them aren’t out yet.

B: Just to answer the question I’ve always liked “one hundred needles to a thread” in January Sun.

Can you tell us a bit more about the Pink Magic recording process?

P: So we went to Brighton and lived in Brighton for two weeks with the producer called Alex Newport who’s done like Mars Volta and some other great bands. We stayed in this little cottage by the sea which was lovely and we’d walk into the studio every day, like it was a nice little walk through a park. We’d go in and like just get to it, he was pretty much he’s a genius and he’s really easy to get along with. He’s got such a good insight into the relationships in the band and how to bring them out through the music. We basically had Pink Magic as a song and we went down to the studios for a couple of days of pre-production where we worked with him to change up the structure and the arrangement. Then we sort of recorded it, we had a couple of people in who like we just met whilst in Brighton who helped to do some female backing vocals. It was a really cool process and we had a lot of fun. It was kind of like our first time working with a proper producer in a big studio. It came out sounding exactly like we wanted it to.

B: It was great having someone as equally as passionate working about working with us, rather than just working with an engineer that kind of like just accepted what we put into it.

How would you compare Pink Magic to Summer Of Luv? Or even the difference between them?

B: It’s more representative of the band we are.

P: We say this a lot but I think our songs are almost like a bit of a diary in that you can get a snapshot of where we’re at. Maybe not when they come out as you write a song and it comes out way later than when you write it. But it’s like snapshots in time of the band and I think Pink Magic for us is more of a progression in where we’re going from Summer Of Luv.

So the next release is going to be the next stage in your musical life diary?

P: Totally. We’re already working on it. I won’t give anything away but we’re already really excited for it.

B: The songs on the Pink Magic EP we’re really proud of and we feel are the best things we’ve released to date. The stuff we’re working on now eclipses it still and that’s how it should be.

Have you managed to catch any bands this weekend?

P: We got here, we’re doing press, playing and then leaving.

Is there any you’re going to try and catch though?

: We want to see our boy Post Malone but we’ve got press scheduled for every time he’s playing so I don’t know if that’s going to happen. Wanna go and see Kendrick on Sunday in Leeds.

You’ve got two EPs now so what are the plans for a full-length release?

B: That’s our aim. Our ambition.

P: I think we’re ready to do an album. That’s not to say we’re going to do an album because anything could happen between now and when it comes out as there’s a lot of moving parts that need to go together. But we’re writing new music at the moment actively with our debut full length in mind.

Since we’re at Reading Festival, do you have a festival anthem?

B: My first ever Reading and Leeds was 2008 and the headliner that I loved watching the most was Rage Against The Machine, so it would be Killing In The Name.