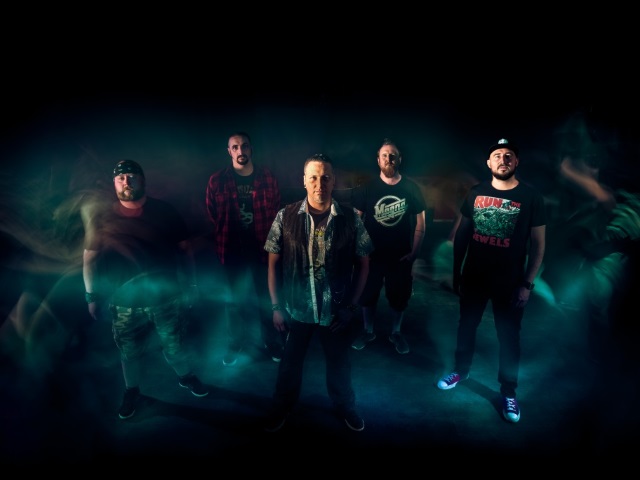 With the release of their new album Solitude and Savagery on the horizon, we caught up with Manchester’s Barbarian Hermit to talk about the new record, their journey so far, their favourite beer and more.

You have a new album coming out soon but first things first let’s get the most important stuff out of the way, we hear you love beer. Can you name your top 5 beers that our readers should be trying out?

We’ve picked one each for you – Summer Lightning (Hop Back Brewery), Don’t Mess With Manchester (Northern Monk), Franziskaner (tasty German lager), Beavertown Neck Oil, and… whatever Ed is having on his cornflakes. Probably Guinness.

Ok, back on topic. What is a Barbarian Hermit? It sounds like a character from Game of Thrones.

Not many people know this but, it’s actually a type of crab that the Mayans trained to steal oranges from neighbouring tribes. Once all the oranges had run out, the Barbarian Hermit Crabs (BHC’s to their friends) just sort of fucked off back into the sea. Turns out the Mayans weren’t too bright and just sort of followed them into the sea thinking they were getting more delicious fruit and that’s why there aren’t any Mayans left.

Tell us a bit about your forthcoming album Solitude and Savagery.

It’s hench. Fully hench. Like a bull on supplements. It has a few different vibes to it. A bit of this and that. A lot of it was written before we booked into a studio (SkyHammer, amazing place) but we finished some of it quite close to recording time really. Some great stuff came out of those slightly worried rehearsal sessions though and then some stuff got rearranged while in the studio but every change was for the better and we came away with a beautiful audio baby. We couldn’t be more proud. It’s our first official album and consists of seven songs totalling just under an hour. A very nice chap called Mr Hass did the fantastic artwork for us and it just fits perfectly with the music. In fact, going back to the beer question at the start – that artwork is also going to be on the front of the can for the beer that we’re releasing to coincide with the album. Can’t say too much about it but it’ll be along very soon and we’re releasing it with Northern Monk brewery.

How have you found the response from press so far to the new album?

Fantastic! We’re struggling to find people who aren’t digging it so far, which is nice. We’re open to feedback so we’re keeping an eye out for any negative comments to take back to our Hermit Cave so we can moan about them and promptly eject them into the sun via the Hermit-Cannon. But seriously, we’re glad people love it so far and hope they continue to do so. Hard.

As a band you’re just putting out your debut album but you already have a strong underground following and key support throughout the press and media, can you tell us a bit about your journey so far.

Hermit has been through a lot of changes over the years. Ed, Mike and Adam were there from the start, along with Chris on bass and Loz on drums. Then when Ed went to Korea, Si came in on vocals. The first EP was recorded with that line up (Adam, Chris, Loz, Mike and Si). They were the foundation. Somewhere along the line the moods, wants and musical needs of some members changed, seeing Si, Chris and then Loz all depart to explore their own creative paths. Around the same time Si and Chris left was when Ed came back and not long after that Chris left and I took the reigns as bass player. Then last, but by no means least, we got the powerhouse that is Gaz on drums and we got to work on making more noise and writing the absolute fuck out of a new album! The history aside – we try to gig as much as our personal lives will afford us to. The main result of said gigs being the glorious win of the Manchester leg of Bloodstock’s Metal 2 The Masses competition earlier this year which secured us a place on the New Blood Stage, performing to nearly 2000 people! We’ve still not stopped grinning about that. Hopefully this album will open a few more eyes and ears to us so we can go about blowing the arse off of more festivals.

What’s next for Barbarian Hermit? Any shows, tours or videos coming up?

We’ve just put out a video for Black Mass from the upcoming album. The old Hermit vocalist, Si Scarlett, actually did all of that for us because he’s a lovely bloke. We’re not sure if we’ll do any more videos on this album but you never know. As for gigs, here’s what we’ve got lined up for the rest of the year:

We’ve got some more lined up for next year, check our Facebook page to see/hear more!

Finally, if you had to spend the rest of your life on a desert island, but were allowed to take just five films with you to keep you from losing your mind, which films would you choose?

I’d have to pick 3 old favourites – High Fidelity, Empire Records and Dazed & Confused. Just because I love them and they have great soundtracks. 28 Days Later because it’s one of my go-to films. And the third Hobbit film. Because it’s about 5 hours long and I haven’t seen it yet. But that could double up as something to get me to sleep as well, if I’m struggling to doze off on my coconut mattress. I’m assuming there’s a telly and DVD player and unlimited electricity on this island? Otherwise I’ll have to act these films out myself and I honestly can’t be arsed.

Barbarian Hermit‘s new album Solitude and Savagery is due for release on 16th November via APF Records, available to pre-order in physical and digital formats.

VIDEO NEWS: Slipknot Return With New Single ‘All Out Life’