MUSIC INTERVIEW: Against The Current Currently on their biggest UK headline tour to date and with the release of their new album Past Lives on the cards, we caught up with Against The Current vocalist Chrissy Costanza to talk about the band’s growth, what we can expect from the new material and more.

Hey, thanks for taking the time to chat to us – hope you’re well! You release your second album Past Lives at the end of this month, can you tell us a bit about the release?

We’re really excited to finally have our second album out, it feels like we’ve had it in our hands for so long and we are really, really looking forward to putting it in the hands of the fans. We’ve already released four songs off the album, which is pretty fun for us, to already be hearing fans singing back to us before the album is even out, it’s such a surreal feeling for us. We really just can’t wait.

It’s been over two years since you released your debut album In Our Bones, what have you been up to in that time?

We have toured everywhere, so many places since the release of In Our Bones. We got to go to so many places that we had never been before, we did quite a few support tours as well, we were able to support All Time Low, Good Charlotte, Fall Out Boy– all of them were unreal experiences, we had so much fun.

How have you grown as a band since the release of your debut album? Has your growth impacted the new material?

We’ve absolutely grown. I think at the end of In Our Bones we wrote Wasteland, which was the last song to make the record and it was written a few months after all of the other songs were already done. For that song, we changed our writing process a little bit, that really heavily influenced how we went into this next record. Instead of worrying about the fact that we are three people in a band, with vocals, guitar and drums and having to have a guitar part, a drum part and a vocal part the whole way through, we kind of backed off from that and thought “what if it’s just synths? What if it’s just drums? What if the song doesn’t call for that?” and it opened so many doors for us, because we were able to explore so many different types of songs and writing processes that we had closed ourselves off from before.

You’re currently in the middle of your headline run in the UK, which tracks off the new record are you most excited to play live?

I’ve been really excited to play Voices, because that’s already seeming to be a fan favourite and it’s off of the most recent release, so we are really excited to have that out and have everybody dancing and singing along to that one.

The headline run sees you play some big venues, what can we expect from the tour?

Our set is more open than any other set that we’ve played before. We’ve structured it quite differently and we didn’t go in with the same mentality that we always do, which was like “fast, fast, fast, slow slow, slow”; which was kind of exhausting and there still wasn’t a whole lot of dynamic to it, with this set we wanted it to eb and flow a lot more, we wanted the set to have a lot of mood and dynamic and hinges. So that’s what this set is going to be much more like this time.

Is there anywhere (eg. food places, tourist spots) in the UK that you love to visit when you’re on tour over here?

Yesterday I was able to go to a place called Monkey Haven, on the Isle of Wight and I have never been to the Isle of Wight before, so that was really cool- to literally have monkeys sitting on my head and hanging out on my hands and my arms, so apparently the UK is the best place to go and meet exotic animals.

You have had a lot of success on YouTube and gained fans across the world – is there anywhere in the world that you would like to tour that you haven’t had chance to yet?

You’re from Poughkeepsie, NY – what was the music scene like there growing up? Are there any bands from the area that you think we should check out?

So Dan & Will have lived around the Poughkeepsie area since they were like 8, I think. Then when I met them I started hanging out a lot in the area too when I was like 15/16. There was a really dense local scene at the time, then everyone kind of just moved on or moved out. I don’t really know many other bands that are still going in that scene. A lot of them are major artists now, we have a friend – Angelo Estrada – he’s a potter, he makes pottery and it’s unreal. In terms of bands, I couldn’t even name one.

If you’ve checked out the band at any point in your life, thank you so much because we love touring, we love travelling, but the only reason we are able to do it is if anyone wants us to come. So, if you’ve taken any amount of time out of your day to check us out or come to a show or listen to our record, thank you so much because you are what makes this possible for us and we couldn’t do it on our own, so thank you.

Against The Current‘s new album Past Lives is due for release on the 28th September, available to purchase HERE.

See Against The Current live on one of their remaining UK tour dates:

Tags : Against The Current
previous article 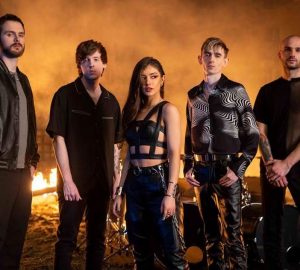