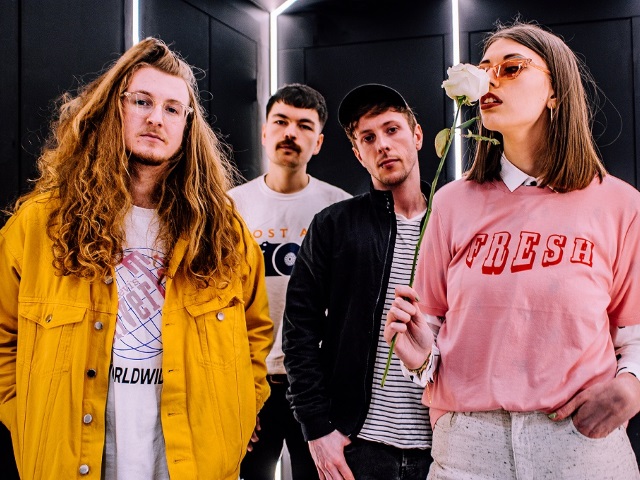 Brighton based quartet Orchards have just released their Losers/Lovers EP via Big Scary Monsters. Produced by Thomas Le Beau Morley, the EP touches upon everything from love, loss and mental health in a sincere and special way.

Lead single Luv U 2 starts off with an over-enthusiastic ‘WOOH‘, kicking off the EP with a bit of fun. The sugar-coated pop melodies are mixed in with rocky guitar lines, creating a fun cocktail of a track. Perfect for a sing-along session on a summer’s day it will be imprinted on your brain, and we love it. Drama King takes a different, guitar-led direction, with Sam Rushton and Dan Fane‘s stuttering lines emblazoned with Lucy Evers’ vocal print. There’s a real sense of anger and passion throughout this track, knowing that you’ve been let down by someone but releasing you don’t need them in your life. We’ve all been there, let’s be honest!

The love theme comes into play heavily in the slower, higher pitched Be Here, and if it wasn’t for Evers’ vocals you wouldn’t know that this is the same band. Lyrics such as “you’ve not been here lately” give a sense of insecurity in a relationship, whether that be romantic or friendship, and feeling as if you’re losing that person. A clever use of backing vocals on this track create a hauntingly heartbreaking feel. The sickly sweet Double Vision has one of the catchiest guitar lines on the EP and on the outside seems to be a happy, fun song. Instead, the lyrics tell of the struggle with depression and anxiety. There’s a real sense of hope for the future, learning to accept the situation you’re in and falling in love with yourself again. Who knew such a meaningful and powerful lyrical message could be this incredibly catchy?

The only problem we’ve started to find is there’s a fair amount of track similarity on Losers/Lovers. Age Of You despite musically having the biggest and most technical drum and guitar lines lacks the distinctiveness to stand out on the release. Peggy manages to turn this around thanks to the feel-good undertones, driving drums from Will Lee-Lewis and the twinkling guitar lines. Orchards pull together at this point of the release to give listeners the full musical package and it’s come at the perfect timing.

Penultimate track Honey is what we’d imagine ‘the musical journey of a bee looking for a flower to pollinate’ to sound like. We could take this track as the story of the importance of bees and looking out for them, or from the women’s point of view when she’s being treated badly. The sultry tones and whirling guitar lanes make this movie soundtrack worthy, with a twangy sting when you least expect it. Closing track Darling sadly lacks the excitement we’ve experienced so far with this EP; despite having the funkiest guitars on the release, we’re looking for a real in-your-face bang to close the release and we just don’t get it.

Orchards have successfully produced a solid eight-track EP, albeit weak in places with a lack of distinction between some of the tracks. There are good foundations for their future, with both lyrical and musical talents shining through: it’s fun, it’s feel-good and it’s just what you need for your summer evenings.

For Fans Of: Foals, Everything Everything, Rolo Tomassi