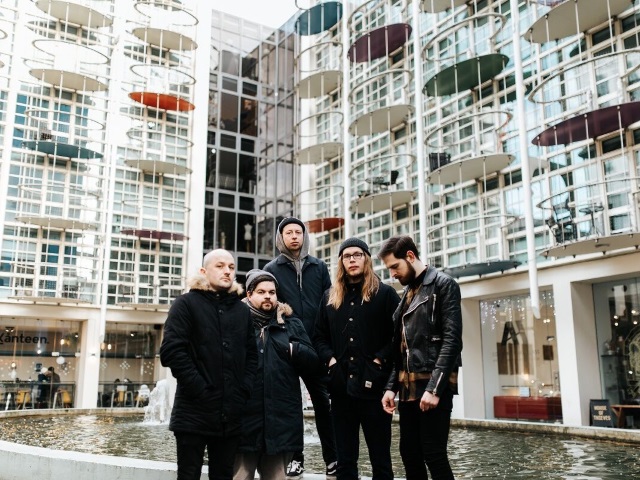 Having spent the majority of 2016 and 2017 touring across the UK and playing shows with Creeper, WSTR, Fangclub, Wallflower, Muskets and more, alt-rockers Dearist are ready to hit the road again in support of their forthcoming album Sonder. We caught up with vocalist/guitarist Adam Binder to hear the band’s top tips and tour stories!

The best thing about touring is getting to play with so many great bands. It’s amazing when you play with a band you maybe wouldn’t have stumbled across before, but then you see them live in a shitty venue in a tiny town somewhere and they just blow you away. We recently did a tour with a Scottish band called Cold Years. We played the first show in a venue in Glasgow that looked more like an art space than a venue, I saw them sound check and immediately went straight outside to find the rest of the Dearist boys and was like “these guys are going to play us off stage every night.” Then it’s an bonus when those incredible bands turn into some of your best friends.

There’s not much I dislike about touring. I know a lot of people would say not sleeping in your own bed every night sucks, but that’s all part of the adventure. Figuring out where you are going to sleep that night is all part of the fun. We’ve been lucky as a band, we’ve never had to sleep overnight sitting up in the van, that would be hell. That doesn’t really answer the question does it… I guess the only thing I can think of is when you have a bad show, you play badly or something goes wrong which puts a bit of a dampener on the whole experience. Though by the time you’ve got to the next show its usually worn off.

1. Lots of water – I’ve found sipping water all day is the best way to keep my voice in shape over a prolonged period
2. Berocca – When your eating crap food most of the time, these things are great to stop you getting sick. Getting sick on tour is the worst!
3. Herbal sleeping tablets – Sometimes its hard to relax when you’re in a strange environment and you’re buzzing after a good gig so I like to have some herbal tablets to help me get a good nights sleep, again a vital ingredient to not getting sick.
4. A warm sleeping bag – I’ve got one of those military grade sleeping bags… when you tour, you sleep on a lot of cold floors, if I didn’t have that sleeping bag I would have legit frozen to death on multiple occasions. Though saying that Tucker (Dearist guitarist) takes a small pillow and a fleece blanket on tour, I don’t know how he does it, he swears by it though.
5. Power bank – We all know what a power bank does ;)

I’m not a big reader or anything so time in the van can get a tad boring, however we do enjoy it when someone takes the aux lead and puts together a good DJ set. Lee (Dearist guitarist) is actually a DJ at Birmingham’s Uprawr so he’s pretty nifty with a Spotify playlist. Its great when something unexpected like Vanessa Carlton‘s A Thousand Miles comes on and everyone’s singing along as loud as they can.

This is easy… this is my favourite tour story… though at the time it was scary as shit! We were stopping in Bristol with our friends in Pushing Daisies. Three of them share a house so it’s a bit of a party house. We were a few hours into a evening of stubby beers, oven pizzas and another playlist of bangers. Someone had started the game where you drop a coin into someones drink, which means the victim has to down their drink on the spot. I’m not sure if it’s a Bristol thing or a Pushing Daisies thing but we were playing it with bottle caps instead of coins. Someone slapped a bottle cap into a large rum and coke Tucker was drinking and as per social etiquette Tucker proceeded to down it in one. One problem…he forgot to stop drinking when he go to the bottle cap at the bottom of the glass and said bottle cap lodged itself in his throat. Everyone quickly realised something was up when Tucker started choking and trying to use his fingers to dislodge the metal cap. Like an absolute hero, Jim (Dearist drummer) jumped in to the rescue and gave Tucker the Heimlich manoeuvre and it came flying out into Tuckers hand. Without missing a beat Tucker throws the bottle cap to the floor and downs two stubby beers. It’s safe to say we don’t play that game anymore!

On one tour we had a list of challenges we had to complete for points, going head to head with the band we were touring with (Pushing Daisies again). One of the challenges was to wear a Hawaiian shirt for 24 hours straight, as in you can’t take it off at all, you have to play the show in it, shower it it, sleep in it. Jim thought it would be easy points and put himself forward for it. We had a show at a sea-side town and it was a warm day so a few of us went for a swim in the sea (including Jim in his fresh shirt). What Jim didn’t count on was that his shirt was going to get soaked in salty water and when cotton gets soaked in salty water and then drys it basically turns into wearable sand paper. Cue 20 odd hours of Jim wearing his abrasive shirt rubbing up against his nipples. Watching Jim having to apply plasters to his nipples due to hours of chaffing was hilarious.

We’ve been quite lucky that nothing too embarrassing has happened. I guess a time a felt pretty stupid was during a show in Nottingham. We were on our last song and I had gotten really into it and was throwing my guitar around bit more than usual. Somehow during one of my ‘guitar flings’ I managed to catch a mic lead that was attached to one of Jim’s drums. Jim tom went flying across the stage and I went from feeling like a rock god to jack ass.

I’m personally not a big drinker however one night on tour with our pals in Wallflower I decided to go in. Nothing out of the ordinary happened that night however the next day my hangover was epic. I spent most of the day holding back the vom and not talking to anyone. It was so bad I had to go on stage that night with a beer box sat next to me just in case. I spent the whole set holding back from throwing up on the mic and crowd. What made it worse was it was a home town show and a load of friends had come out to see us including my other half, who spent the evening walking me around the block in silence trying to get a fresh air remedy.

Dearist’s latest album Sonder is due for release on the 27th April via Spartan Records, available to pre-order HERE.