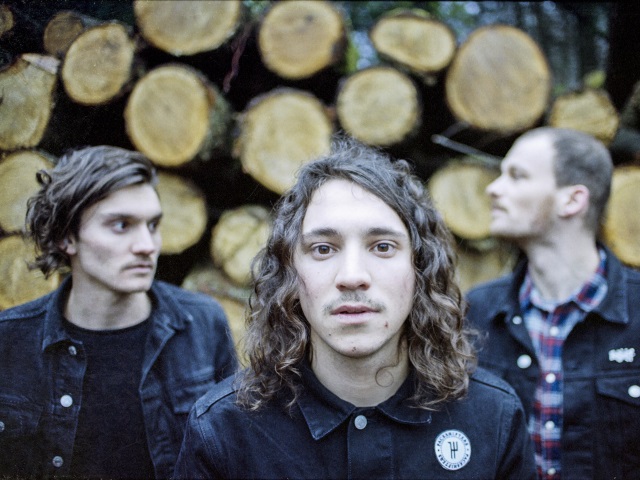 After a hugely successful UK/European tour with Frank Iero And The Patience, alt-rock trio Paceshifters return to the UK this week for a headline run in support of their latest release Waiting To Derail/Live At GieSound Studios. We caught up with guitarist/vocalist Seb Dokman to hear their top tips and stories from the road.

First of all playing every single night is a great way to grow and practice as a band. Also seeing so many different countries and cities is great.

When you have to park your tour bus too far away from the venue. Finding a good spot for our big van is kinda hard in a busy city.

1. Swimshorts. Always take them with you, you never know.
2. Football. We always sleep on parking lots and it’s good to do some workout in the morning.
3. Bakkie. That’s Dutch for coffee. Finding good coffee is a hell of job but very very important.
4. Spares. Strings…Drumsticks…Clutch…We break a lot of stuff on the road. So taking good precautions is very important.
5. Enough music to keep you entertained while driving.

If we have time left it’s great to roam around in the city, do some sightseeing.

Listening to Gregg Rolie’s (Santana, Journey, Ringo Starr) stories about the music industry and his road experience, while chilling in his pool, drinking all his beer in Austin, Texas. To top it off he loved our new record Waiting To Derail.

We had a six week cross Canada tour with White Cowbell Oklahoma in the winter! We were playing at a club where the toilet upstairs had a sign to NOT use it. I think it was the drummer who didn’t give a shit. A few minutes later we were enjoying some beers at the bar and everything came dripping down from the ceiling, right on the bar.

Falling of a big stage in Austin, Texas. Right in the drums of the support act, ouch.

We always wanted to record a live record and we did that a couple of weeks ago. A lot of pressure on our shoulders but it went fucking great and the crowd was awesome. But somehow I forgot the lyrics to Drone, one of the songs we play almost every show…

While we were recording our record our producer Chris thought we needed some rest. Somehow we ended up jumping off bridges, naked.

See Paceshifters live at one of the following shows: