MUSIC INTERVIEW: Life On The Road With…Jaya The Cat 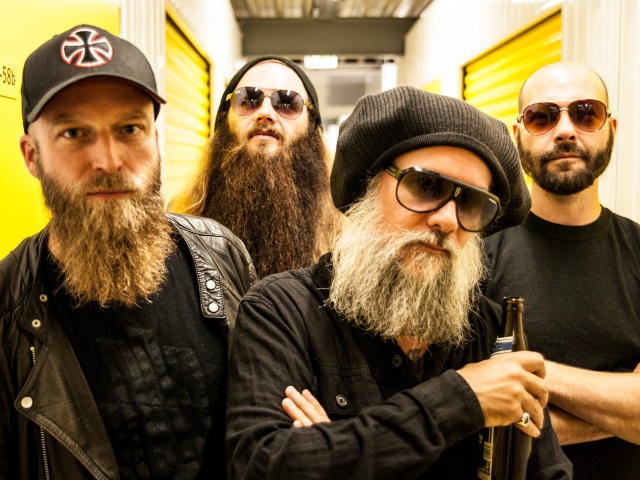 Jaya The Cat are concluding 2017 with a UK headline tour, following on from the release of their fifth studio album A Good Day For The Damned. Describing themselves as “drunk reggae” it was only natural that we wanted to sit down with them to hear their stories from the road – and we’re so glad we did.

Every night we get to party with each other and the most amazing people in town. First at our show and later at the bars around town.

Venues in the middle of an industrial area that get swept clean right after the show, leaving us with nothing but a deserted rainy parking lot.

– A comfortable pile of bags and coats to pass out on

– A bunch of stories from the night before

Drinking, yelling, singing, smoking and the occasional game of miniature.

Driving through the Romanian mountains with a wobbly front wheel and actual steam coming from the asphalt because it had just rained. When a black cat dashed across the road in front of us, we decided to stop at a diner where we were met by a three legged dog and a couple of hobos seeking shelter underneath a piece of cardboard. One of them actually hissed at us.

Together with this Newcastle band called The Grit, we decided to ignore the other bands that were playing today’s German punk festival. Instead we all got in our van, parked it next to main stage facing the audience and created our own party singing and dancing to Scooter. You had to be there. Really.

We showed up 8 hours late and missed our show in Belgrade because we came from Bosnia and tried to get to Serbia through Croatia. Croatian customs wouldn’t let us in because we “didn’t have the right papers and didn’t respect the laws of their country.” This meant we were sent back to Bosnia where we were turned down as well, leaving us stranded in no man’s land like Tom Hanks in The Terminal. We were finally let through by someone who wasn’t as scarred by the war as the rest of them, which put us in Belgrade around 1AM to face some very angry Serbians. Luckily we bonded over our mutual dislike for Croatian officials.

We got pulled over by Slovenian police and played the song Drug Squad to them to prove we’re an actual band. They let us go.

On a very early morning flight back from Vienna, one of us (let’s call him “Jay”) forgot he was on his last day of antibiotics. That didn’t refrain any of us from drinking till the wee hours, resulting in us almost not being allowed to board the plane. Jay got the window seat, The Germ got the middle and Jeroen was passed out in the aisle seat. Jay’s not feeling so good and decides it might be a good idea to visit the lavatory. He climbs over The Germ and Jeroen, takes one step and passes out face first in the middle of the aisle. The Germ leaps into action, climbs over Jeroen and tries to get Jay up and into a seat. After a minute or so, Jay regains consciousness to a stewardess applying a wet towel to his wrists and forehead. Jay lets people around him know he needs to puke so they give him a paper bag. As the vomit starts making its way up his esophagus, he passes out again which causes his head to tilt backwards. Vomit is flying through the cabin like someone forgot to turn off the sprinkler system in the front yard. “Jay”, as we’ll continue to call him, comes around just in time to witness the elderly lady in front of him flicking chunks of Jay’s lunch out of her husband’s collar. When the plane lands we get ordered to stay put until the paramedics and the cops have talked to us to make sure we’re cool. Jeroen, who had been fast asleep for all of the above, wakes up right at the moment the police officer hands Jay back his passport and half asleep, still definitely drunk asks “What, are they giving you a ticket for not having lights on your bike?”

That one time we played three back to back shows at a Hamburg tattoo convention and covered Shaggy‘s Angel while having fire breathing burlesque dancers twirl around us, because they wanted to make us feel better after getting punched in the face and glasses thrown at us by a Russian bar maid at a Hell’s Angels bar on the Reeperbahn the night before, that was pretty outrageous.

A Good Day For The Damned is out now on Bomber Music, available to purchase HERE.

See Jaya The Cat at one of the remaining dates:

MUSIC NEWS: Senses Fail Announce New Album ‘If There Is A Light, It Will Find You’