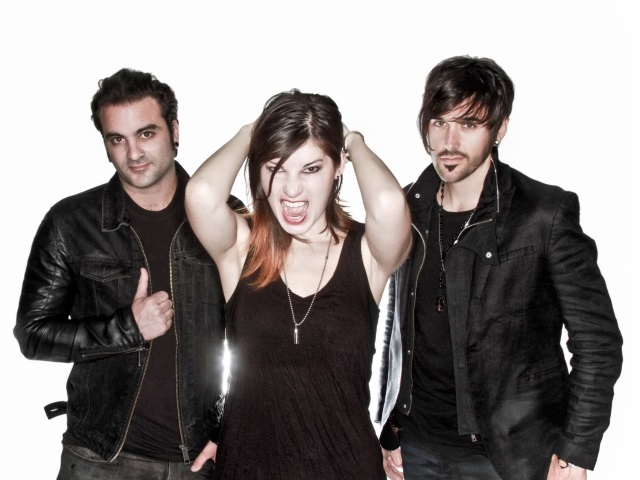 Having released their fifth album Fury earlier this year, Australian based Sick Puppies chose the perfect time to make 2017 their Download Festival debut. Emma Anzai, Mark Goodwin and Bryan Scott gave us the answers to important questions, including: why Sick Puppies?

This is your first Download Festival and you’re playing later this afternoon, how have you found the festival so far?

M: It’s awesome. We’ve heard about this festival for years it’s a world class festival and known all around the world. We’ve been touring our fourth album Fury, we do a lot of touring the States so the last ten years we’ve been hitting that hard and we’re just trying to branch out and play the rest of the world. We’ve done it a few times but we haven’t been back in a while so it’s good to be rebuilding here.

You’ve had top ten singles in the US, how do the receptions compare?

E: We haven’t been here as much as we would like but we hope to change that from now on. Hopefully, we’ll be back end of this year as well. We’ve just come out with our album Fury and I mean I think that considering we’ve played places like Ukraine and Russia as well and considering we hadn’t been there people are really enthusiastic and know the words and stuff, it’s really heartwarming to think that can happen. In that respect fans in the UK, considering we’ve only been here a few times.

You recently released your album Fury, could you chose one lyric – your favourite or most relatable – from it?

M: Our first single from it Stick To Your Guns there’s a lot of lyrics from it, even just that phrase. Stick to your guns stick to what you do as that’s really meaningful for us. We’re passionate about music that’s all we’ve ever wanted to do and that’s the goal, the only way to keep that alive is to keep your eye on the target. That’s what that song is about, that’s what it means to us.

We don’t usually ask this but we’re intrigued by your band name, could you tell us how it came about?

B: There should be a story behind it.

M: They came up with in Australia years and years ago.

E: It was on a list. There’s a lot of stories flying around like a puppy came into our garage and threw up. But we kind of made that up early on because the original story was so boring that it was on a list. We’re meaning to change it to because it sounds so, it’s awful. We were going to change it but then it stuck and it’s memorable.

B: We Will Rock You. Queen.

M: So obvious, so on the nose.

B: That’s Download is though, it’s so large. To see this many people coming out for rock music it’s great.

M: Rock’s alive and well especially in the UK and we’re stoked to be a part of it.

B: Coming back here in November too, should be the plan.