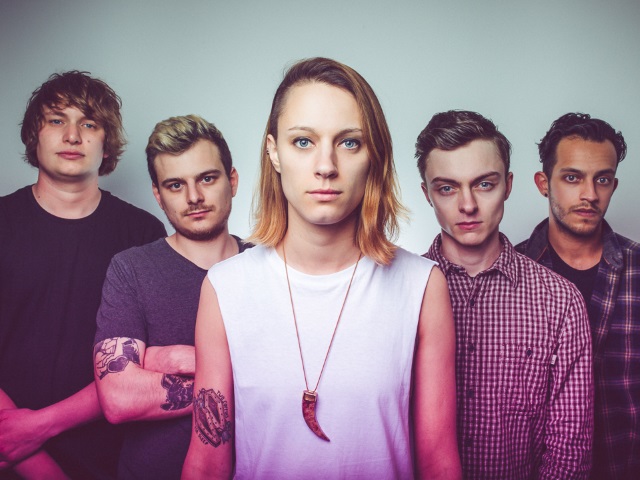 Following on from their slot on the Dogtooth Stage at Download 2017 we caught up with punk rock band Drones to see how the festival was for them, their political side and what’s next on the cards.

You guys played Download earlier today, how was it for you?

The Territories video was released not too long ago, could you tell us a bit more about it and the meaning behind the song?

L: It’s quite a political song obviously and it’s about the general idea that I find it quite bizarre that we rely on one person to run the country. In particular because obviously, it means that personalities become involved which is just ridiculous. People start voting depending on the actual person rather than the policies which I don’t agree with at all and it takes its toll on the actual person. It makes it worse for them and their parties overall.

Have you ever run into issues with the political side of your music?

Where does the inspiration from your song lyrics come from?

L: Anything really, I’ve written lyrics that are personal but the majority of this band does come down to not political sidings but more social issues. I think it’s really cool to address it in the band, we have that platform.

James: It’s things we feel the need to shout about and try to get our ideas out there.

R: It’s not necessarily taking a side or pushing a particular idea to anyone. It’s just opening people’s eyes to things they might not have considered.

Which other bands would you like to play with? You’ve spoken about the political and social issue elements so Max Raptor strikes as a band who would match pretty well…

L: I love Max Raptor, I know Matt from the band and he’s a good friend. I love everything they stand for. I caught them the other day at Camden Rocks and I loved it.

What would be your festival anthem as we’re here at Download?

R: In Too Deep

L: In Too Deep by Sum 41 as we’re usually pretty deep in the mud in the midst of it.

R: We’ve got some ocassional shows coming up.

J: With the album we’ll be doing a lot more touring and getting out more

R: Getting back out to Europe hopefully too!