MUSIC INTERVIEW: The Charm The Fury 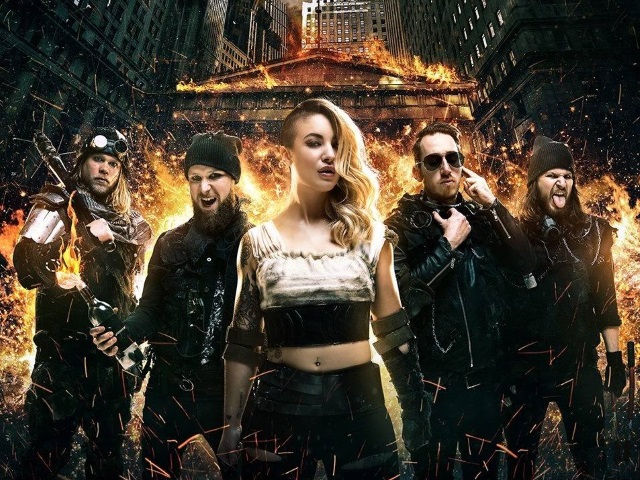 Last month Amsterdam metallers The Charm The Fury released their new album The Sick, Dumb & Happy. We caught up with bassist Lucas Arnoldussen surrounding the release to discuss why they chose to work with more than one producer on the record, influences and more.

Thanks for taking the time to talk to us – what have you been up to today?

Haha, not much! I’m answering interviews all day and I’ll do some other writing work when I’m done.

You’ve recently released your new album The Sick, Dumb & Happy via Nuclear Blast – how does it compare to your previous material?

I guess it takes a step away from the overly used metalcore sound. Back when we recorded A Shade… we loved that bass heavy, ear shattering modern wall of sound. Unfortunately, nowadays that sounds is far from unique and distinctive. When we started to write the new record, we felt like we really wanted to do something different. We took inspiration from some all time heroes like Metallica and Slipknot and tried to put their energy and superb riffage in modern day metal tracks.

Are any of your musical heroes on the Nuclear Blast roster?

There’s a couple! Bands like Dimmu Borgir, Meshuggah and Slayer have had a major influence on every metal band that’s around now. It’s on honour to be on the same list as these guys.

You worked with several producers when mixing the record, what made you decide to do this?

We wanted to work out of our comfort zone a bit. We didn’t want The Sick… to be a copy of A Shade…, so we tried to avoid our usual writing habits. That included some external producers. I think that paid off: the had a substantial influence on the sound and the songs of The Sick, Dumb & Happy.

What are your influences both musically and lyrically on this new album?

Musically it’s those timeless bands I mentioned before, like Metallica, Pantera and Korn. What really influenced about their music, is the way how they kept stuff simple. Just one riff could be a whole song. Lyrically we didn’t find inspiration in other bands or artist, but in shit that’s going on. Worldwide, but personally as well. There’s songs about the dangers of fake news and stupid politicians, but a song about the dangers of alcohol, haha.

Is there a track on there that you think your fans will relate to the most?

Our older fans probably relate to No End In Sight and Break And Dominate the most, because those songs’ll remind you of our earlier work. I hope our new fans will get into Blood And Salt and Echoes. I can’t wait to play those tracks live in front of big crowds!

With new albums usually comes touring, where in the world are you hoping to hit on the touring circuit?

We all agree that Japan is must see. We’d really like to go there soon. Also South America would be great. The won’t just sing along the the lyrics, but to every guitar riff and solo as well! Awesome stuff.

Finally for those who are reading this interview who are coming across you for the first time, why should they check you out?

Because we mix everything that’s cool about the bands that metal fans love with some really heavy and modern tunes. Also we’re super nice people, so we kinda deserve your attention, haha!

The Sick, Dumb And Happy is out now on Nuclear Blast.