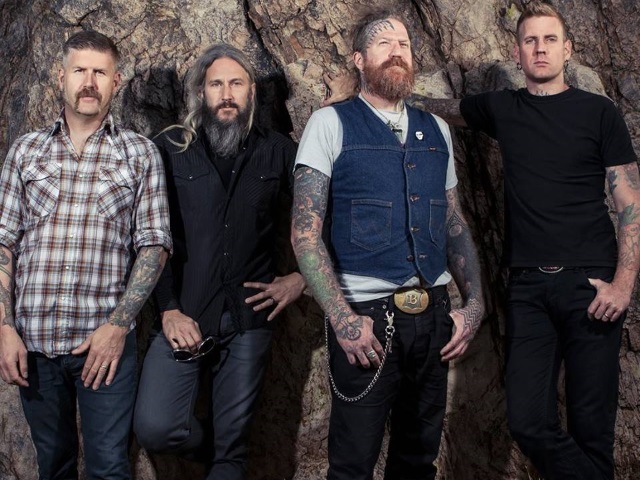 Over the last 15 years, Atlantan progressive metal band Mastodon have released some of the most important heavy music albums of the 21st century. They’ve been a band beloved in all factions of metal fandom, a gateway for some, and always an innovator.

After some well-deserved exposure with 2009’s ambitious, challenging concept album Crack the Skye, the band went down a more commercial route with 2011’s The Hunter, achieving mainstream success in the process. That album showed a band a million miles away from the unrelentingly heavy one that made Remission back in 2002, and was a disappointment for some.

Their last record, Once More ‘Round the Sun, continued the melodic approach seen on its predecessor. But it felt altogether different from The Hunter, and brought back some of the heavier elements present in the band’s earlier work. These two records are seen as inferior to the band’s 2000s output in some people’s eyes, and perhaps they are. But those two records still had Mastodon doing something different and switching things up – even if they weren’t as challenging or innovative as Leviathan or Crack the Skye.

And this is why their latest release, Emperor of Sand, is such a disappointment. Various elements of Mastodon’s sound are present, but for the most part it feels like a direct follow-up to OMRTS, sonically. It’s certainly not a terrible album, but it’s one that’s hard to get particularly excited about.

The album starts well with Sultan’s Curse, which combines a crunching, heavy riff which is some ways reminiscent of the band’s earlier days with some of the more melodic elements of their later work, particularly vocally. There’s an enjoyable instrumental section and guitar solo, and the whole thing feels bigger than it’s four-minute run-time, in a good way. But this is one of the few stand-out moments on Emperor of Sand.

Guitar solos are a recurring element throughout Emperor of Sand, present on almost every song. They’re always noodly and enjoyable, but seldom ever add anything to the track. That’s one of the major problems with this album: most tracks have aspects that are good and work well, but nothing ever comes together and things end up falling apart. Take Precious Stones, for example. Its riffs are great, and its two guitar solos are both fun and technically impressive, but its vocal hooks are painfully weak.

Steambreather has a chuggy, repetitive main riff which becomes boring after a while, but otherwise the guitar parts are great. Vocally, its chorus is one of the strongest on the album, but the verses are pretty unbearable, in regard to singing, because of the affected style in which they are sung. The vocals improve during the songs bridge, where Steambreather admittedly becomes interesting with some chilling, creepy guitar tones. However, this is indicative what’s already been said, and of the quality of Emperor of Sand as whole: one great section can’t save a deeply flawed song.

The band’s most recent single from this album, Show Yourself is easily the weakest track on an album that isn’t great. Its shamelessly catchy hook rings hollow and the song lazily throws together many tropes that Mastodon have explored more thoroughly (and simply done better) on earlier albums.

Most of the second half is bogged down by noodly solos, which certainly show off Mastodon’s technical proficiency. But at this point, that’s surely something we’re already aware of?

Mastodon incorporate some interesting ideas that at least attempt to push the envelope a little later on, with things like a psychedelic, electronic-influenced passage in Clandestiny; and the way Ancient Kingdom is structured, its instrumentation and vocals changing completely from verse to chorus.

However, these elements simply don’t save Emperor of Sand from its prevailing mediocrity. Whether it’s Roots Remain‘s attempt at epic that results in a yawn-fest; Word to the Wise‘s attempt to speed things up that results in what is simply an extremely forgettable track; or Scorpion Breath‘s clusterfuck of underdeveloped ideas, very little on Emperor of Sand strikes a chord the way Mastodon’s other work did.

While The Hunter was a noticeable drop in quality from the band’s glory days, it at least kept things interesting by attempting various different styles: see the sonic difference between Curl of the Burl and Spectrelight. OMRTS combined a more melodic approach with expansive soundscapes and an ethereal atmosphere. The band’s 2000s work, of course, was masterful in its balancing of sheer heaviness, progressive and technical elements, and accessibility. And while Emperor of Sand carries on some of these traditions, nothing ever quite lands the way it should.

The closer, Jaguar God, stands out as one of the better tracks due in some part to its sense of individuality. Its first half is an inferior attempt at some of The Hunter‘s balladry, but things get better later on. There’s some sitar, well-placed dual guitars, and an interestingly mystic atmosphere. Add some claustrophobic creeping dread in the instrumentation, and keep things interesting by introducing a new riff about three-quarters of the way through, and the boys are, for a little while, onto a winner. It’s a section of the track that recalls what made Mastodon great in the first place – but it’s not enough to save what’s a pitifully mediocre album from a genre-defining band. Emperor of Sand isn’t a completely awful, irredeemable album, but it certainly stands out as Mastodon’s weakest to date.