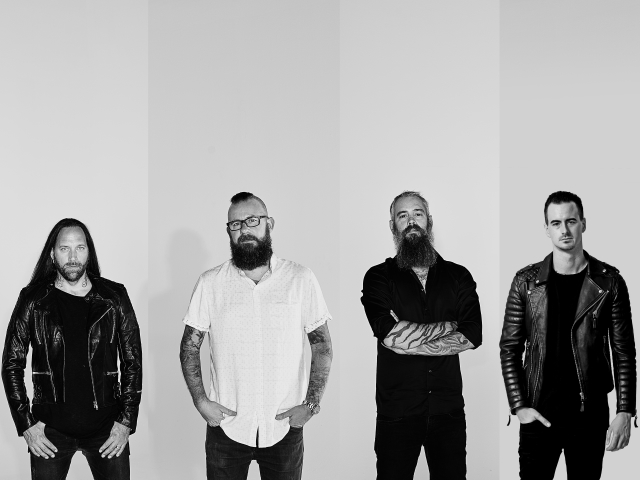 Supporting Avenged Sevenfold on their UK arena tour, In Flames begin the first UK leg of the Battles touring cycle. We caught up with guitarist Bjorn Gelotte at the Glasgow SSE Hydro to find out more about new music, recording, and what it’s like to be in the band in 2017.

In Flames has existed for more than 25 years. Since then the line up and the sound has changed drastically. What motivates you in 2017?

Having fun. It’s the number one thing. I always wanted to have fun, and from the get go we decided that this needs to be our music, this needs to be done by us and for us; very egoistic, but at the same time that’s the only way we can actually have fun every night for almost thirty years. If it’s your own music, the way you want to write it, the way you want to play it, then it’s fun.

So would you say recording new records is a means to an end for you? A means to tour?

It’s absolutely true for me. Depends who you ask, for me sometimes I can get the feeling of “let’s do a record so we have something to tour” and have a couple of new songs that we can add to the set, but at the same time the writing and the recording is super important obviously. You don’t want to get it wrong because you only have one shot at it, so you want to do it right, and you want to make sure you can actually play the stuff live.

We vaguely remember around the beginning of the Siren Charms cycle that there was some stuff on your Facebook about that maybe being the last In Flames album. Do you see there coming a point in the near future where you say enough is enough? Do you operate on an album by album basis at this stage?

Yeah. I mean at the same time no because this is the one thing I love to do and it’s the one thing I know how to do. So it would be stupid to say we’re just going to do one more. But then again I’m 41, and I’ve done this band for more than half my life, so priorities change. But this is the best thing in the world, I love it! Even though nobody knew us – well some people did – and we’re playing our own songs in front of a fucking big crowd opening up for their fans, I can’t complain. I can’t even call it a job, but it’s the best thing to do, ever.

You released your new album Battles last year. Obviously at the time it can be the last thing you want to hear…

It’s still the last thing I want to hear [laughs].

How do you feel about it now?

From what we understand yourself and Anders (Frieden, vocals) are the writing core at this point. How did you approach the writing process for this record?

That was started out at home as we normally do, and I brought the bag of riffs, and Nick (Engelin, guitars) was in here fairly early. Well, fairly late actually but earlier compared to normally because he wasn’t in before!

So is this the first time you collaborated on an album?

We’ve played guitar together for years now, for hours every day. On tour we play at least an hour/an hour and a half before the show then we do an hour and half set, so that means we play guitar together for almost three hours a day. It took a while but now we’re very in sync. Nick has been with us through really crucial tours, crucial albums. He’s a great guitar player, he’s a great songwriter, you probably know his other bands and he’s probably one of the most productive guitar players I know.

So this was a new way of writing for In Flames?

Yeah but for many reasons I mean the same thing when it came to the choice of producer, the way me and Anders had to work together, I could actually be part of the vocal melodies and I’ve never done that before with him.

It’s one of Anders’ most melodic albums we feel even though you had tracks like Through Oblivion on the last album, but we suppose there’s only so much you can convey with screaming…

Melody is the core of what we do, if you want to have it in the vocals or the guitars or the keyboards, it doesn’t really matter, as long as it feels right. And as long as you can translate that live.

What is the album about?

Well it’s called Battles. It’s about inner struggle on a personal level. We constantly have them, it can be small practical problems that are about what you might have for lunch all the way up to ethical dilemmas and moral choices you have to make every day, you don’t even think about it but you make them.

So quite a broad scope then.

It always has when he writes lyrics, it’s always from his point of view, which is not everybody’s. The good thing is that the way he writes it is that everyone can relate to it and put their own experiences into it, and then you can have your own picture, but he would never explain to you “this is what I’m writing about, this is what I’m talking about” – he would never do that, which is interesting, challenging and often times very very exciting because you find out shit about yourself you didn’t think about.

Do you find it quite easy to get behind his lyrics because of that?

Yeah. Especially when I get to work with it. I relate from a totally different angle to it and it gives it such a depth that you know what you want to keep and what you want to scrape away.

How much of an influence did Howard Benson have on the album? Do you think his more mainstream sensibilities bled into the album’s sound?

We did. Our management team was really cool with us. We signed with them and wanted to do something that we haven’t done in the past, we want to work with a producer properly because we’ve had producers in the past, but we’ve never properly worked with them. They’ve been more like engineers who are maybe mixing guys. We named eight to ten producers that we love, grew up listening to and really respect, and they just arranged phone conferences with them, so we got to talk to all these guys. All of them knew about us – we’ve been around long enough and knew a lot of our history, and Howard just said the right things. He knew that we’ve done this for such a long time we just want to make sure we focus and make the right choices and he wanted to be the guy.

You guys have been nominated for a Swedish Grammy, do you feel validated by that kind of thing?

In the end our audience decides, if it’s a jury, it’s all a matter of acting and “you’re in the cool circle now”, we’ve been in and out of the cool circle so many times.

What do you think of awards like that in general? We’ve been quite impressed by the regular Grammys because they’ve included bands like Gojira and Periphery this year, but in previous years it’s felt like the metal categories aren’t really given much thought.

In the end, when that happens in the US it’s a bigger deal because it could make a difference on what venues you play in the next two years, but it’s still not fair. It’s not about an audience voting. I’m not against it but I don’t really put any energy towards it.

So you’re never going to be like, “let’s win a Grammy-winning song”, then.

[Laughs] and you would never know! I mean, it’s the same when it comes to “let’s make this type of song” because we know people like it – no you don’t, all you can do is write from the heart, it’s the only thing you can do.

You’ve got an “evening with” style tour coming up in March. What can people expect from that? Is it going to be Battles in full or more of a career spanning thing?

Well we’re making it an “evening with”. It kind of depends, some songs are not meant for live use, some need to be reworked, but the whole environment is going to be so different from what we normally do when it comes to those shows. It’s called In Our Room, it’s going to be relaxed, there’s going to be some acoustic stuff, it’s going to be – I shouldn’t say too much you shouldn’t write that. I want it to be a surprise. It’s going to be different and very intimate and that’s the whole point of it, while trying not to lose focus on what we think we do best.

These are some huge arena shows you’re doing by comparison with short sets, what’s your preference?

Today was really short but that was down to technical issues on all sides…I’d rather play an hour and twenty minutes in front of people that know us but this is very important to do as well, there’s a lot of people here who have never been to an In Flames show, probably a lot of them haven’t heard In Flames besides the few they might have heard on radio, so for us it’s a great platform from which to showcase what we do and how we do it, and hopefully we can get people to come here next time we play live.

We suppose because you’ve got such a diverse back catalogue it’s a good way of letting people know “this is what we’re doing now”.

I mean it’s been a long journey, and I like to think there’s a little bit for everybody in that, there’s a really wide range of songs, but that’s the whole point of this tour, we love those bands, we really really respect these guys because they’re hard working touring bands that have been paying their dues and done a lot of records, toured the world and really really worked hard, and that’s what we do too, so for us it was not a weird thing, it’s a great opportunity.

We’re doing that in March, then we have a bunch of U.S. festivals in April/May, then we go back and do a bunch of European festivals, we had the whole summer off last year, so now we have to do that. Then probably back to the US for either a support or a headliner tour after the summer festivals, then maybe an arena run, we’ll see. We’re going to be busy!