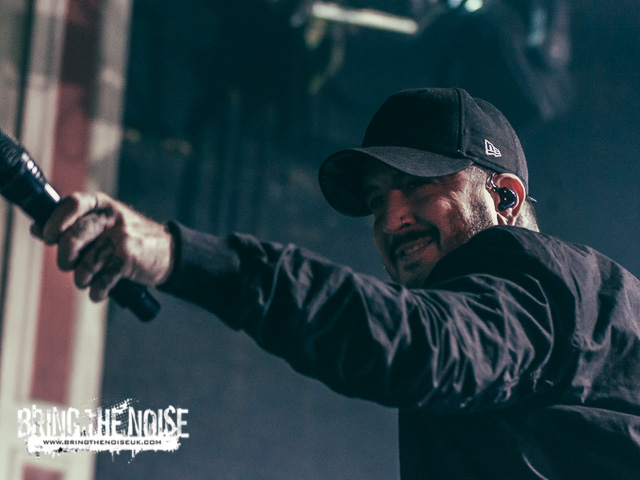 Despite once again being pulled off the road due to Austin Carlile’s continuing battle with Marfan Syndrome, Of Mice & Men were able to complete several of their UK dates before cancelling the remainder of the Cold World European tour, and we were lucky enough to catch them at Glasgow’s o2 Academy.

A fitting choice of support both in terms of sound and audience appeal, Crown The Empire manage to garner a strong response from the predominantly younger crowd. While officially the band are currently a five-piece, co-vocalist David Escamilla is for some reason absent with remaining members sharing vocal duties. Sole frontman Andy Leo is a particularly magnetic presence, spearheading tracks from their latest album Retrograde with ease. Musically speaking, the band are somewhat a generic Rise Records band, and while their newer material is the strongest part of their set, Crown The Empire struggle to be particularly memorable.

While it isn’t uncommon for a venue to still be filling up while supports play, alarm bells begin to ring as five minutes before Of Mice & Men are due to take to the stage, the 2200 capacity o2 Academy is only a third full. Perhaps due to the fact that they have been off the road for some time due to frontman Austin Carlile’s well documented medical battles, or maybe down to the decidedly lukewarm reception to new album Cold World, the band have an uphill struggle on their hands.

Opening with Cold World’s first single, it becomes clear that its weak production was one of its biggest drawbacks – Pain sounds utterly rabid and monstrous live. Carlile’s cathartic lyrical content also feels far more visceral here too, with the suffering he has endured over the last few years written all over his face. The band themselves are also incredibly tight, with Valentino Arteaga’s powerful drumming dominating the band’s live sound.

Despite such an explosive introduction, the SoCal five piece make the mistake of frontloading their set with Cold World’s wetter, ballady material. Additionally, older tracks such as Never Giving Up and Broken Generation are decent sing-along moments (bassist/vocalist Aaron Pauley in particular is on white hot form tonight), but lack the heaviness required to ensure they leave their intended mark.

After a very lengthy false start, things pick up almost immediately as the band play four of their heaviest, most immediate tracks in succession to close out the set, the floundering seen earlier is a distant memory, as those in attendance respond with gusto to Korn-esque bounce of The Depths.

Closing with a flawless one-two punch of You’re Not Alone and Second & Sebring, this feels much more like a band worthy of playing these larger venues, and with a more balanced set, this could have been a far more consistent experience. Of Mice & Men are to be commended for consistently changing up their sound every album, but Cold World’s leap into calmer waters feels just a little premature with both band and audience seeming ill at ease.

Of Mice & Men have often been touted by the music press as (distant) heirs to the throne of rock and metal, and during certain parts of their set they manage to live up to this moniker. However, if the attendance of tonight’s is anything to go by, they have a lot more people to convince.