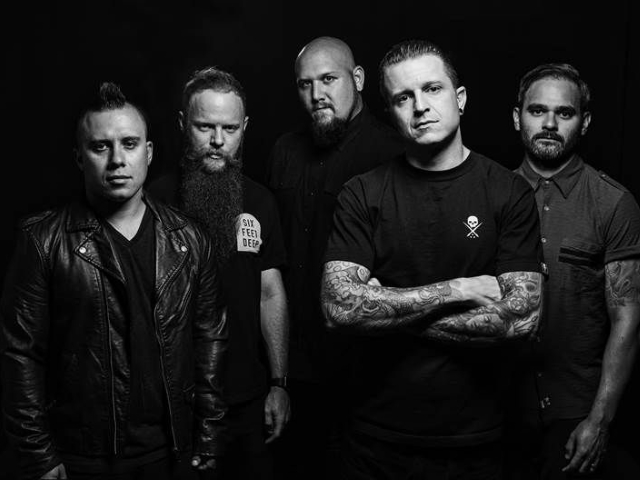 We’re in the press room at Download and with Orange County metalcore originals Atreyu and they have brought the sunshine. After smashing their afternoon set on the main stage, we get to hang out with frontman Alex Varkatzas and find out how Download has been for them…

So we’ve just seen you tear it up on the main stage, what was your favourite moment of the set?

Honestly I think just getting it done! [Laughs]

Getting it over and done with? [Laughs]

[Laughs] No it went well, we had a great time. There’s always stress and nerves involved for me a little bit playing a big show.

After the amount of shows you guys have played that’s surprising! We mean it really isn’t Atreyu’s first big show, you’ve shared the stage with the likes of other headliners Black Sabbath and Judas Priest and hit Download in 2010, what’s the best show you guys have played?

Do you know what? I’m going to counteract that with that’s impossible question, that’s like me asking what’s the best interview you’ve ever done in your life?

Every show must be different, but are there not any that stick out?

What is it about Download that makes good memories?

It’s just a big deal you know? I don’t know what about it it is everyone’s running around, supporting and stuff.

What Bring The Noise love about Download is that it feels everyone is here to support rock music and have come together to see bands like yourself play. You have Reading & Leeds which are a mixed bag, but Download is about bringing rock to the UK. Do you experience that vibe on  stage?

With that in mind, if Atreyu had to be responsible for putting one headliner for the festival, who would it be (dead or alive)?

Ah man I can’t even answer that question. So we wouldn’t have to play? We just put on the show?

Imagine like an Atreyu presents their headliner…Who would it be?

Ah right ok! We’ve toured with Slipknot before that was awesome. The crowd is so pumped up so I think in terms of a live show, them.

Great choice, amazing band live! So touring with Slipknot is a great achievement! What would you say is the biggest acheivement for Atreyu?

Another tough one, as you guys have been around since ’00!

Sorry what was the question again? [Laughs]

Biggest achievement as a band, or even personally within the band?

Probably a show we played in Caifornia and I brought my son on stage with me. He’s 2 now but he was a year and half then, so that was amazing to share that with him, he was pumped up! He kept trying to run over to me the whole time we were playing.

Well that’s going to make lots of people hearts melt! You guys have returned after a 3 year hiatus, how nervous were you were you about the difference in response you would get from the crowd?

You know what? I don’t go through life worrying about stuff like that, we just go for it every time. We’re pretty sure of ourselves. I know where we fit into the world and I’m confident with that, you know what I mean?

Alright! [Struggles to get one] you need a bigger box!

Thats what all the bands say! [Both laugh]

[Picks one and reads out]

Would you rather lick a band members toe or do a belly shot off of one of them?

So it’s when you pour alcohol into someone’s belly button and shot it out of there.

Oh I feel like I should know what that is!

I’m gonna go with a quick lick of the toe!

Who’s toe would you go for?

No we’ll let you off! Let’s do one more!

Who knows man! Well it’s been real, great to catch up with you enjoy your downtime after your performance!

Thanks, see ya later.

Atreyu are back in the game and their album Long Live is out now! 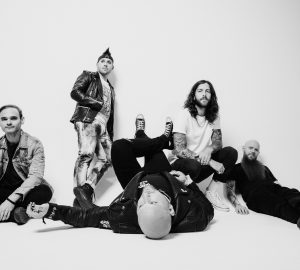