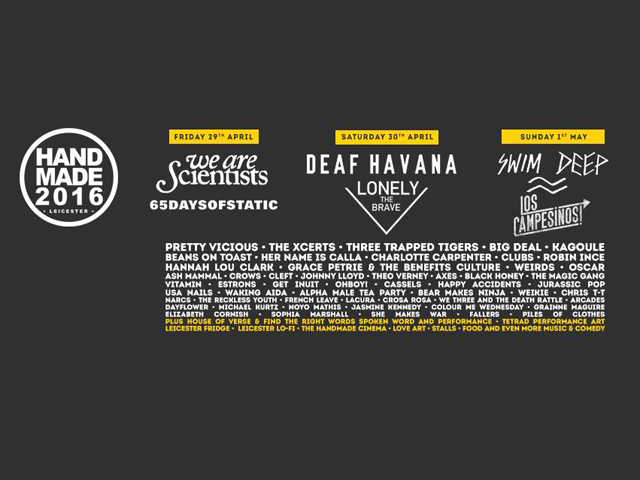 Handmade Festival is right around the corner and is offering a delicious taste of some of the best indie, rock and alternative bands who grace this planet. Prepare yourselves for a brilliant weekend of music and discovery (and possibly leg ache), and if you need some help deciding who to see, we’ve got your back. Here’s our Top 10 picks of bands playing the weekend!

Having recently bounced back onto the indie scene with new album Helter Seltzer, the duo, made up of Chris Cain and Keith ‘Silver Fox’ Murray will undoubtedly bring a lot of fun and frolics to Handmade Festival. Better known for the ’06 anthems Nobody Move, Nobody Get Hurt and The Great Escape, We Are Scientists will prove that they still have so much more to give, combining erratic guitar riffs and danceable beats to create moments of beautiful madness – it’s an unmissable performance, with not a test tube in sight!

Taking inspiration from their name, Black Honey are creating interest with their dark and brooding music, which has sweet undertones, brought to the forefront by vocalist Izzy B Phillips. With a 70s flair and psychedelic melodies this quartet will probably take pride in stealing your heart at Handmade Festival and they sure as hell won’t be giving it back.

Cambridgeshire bred Lonely The Brave wowed us all with their stunning debut album The Day’s War and having spent most of the year thus far in the studio recording the follow-up, we’re keeping everything crossed that we’ll hear a glimpse of what’s to come during their performance. Let David Jakes‘ voice swirl around your mind, as the guitars build a sense of power and passion throughout each song.

Do you like dinosaurs? Jurassic Park? Good. Have a love for lo-fi indie music? Well then, Oxford group Jurassic Pop are going to be right up your street. Unfortunately, it’s not dinosaurs playing instruments, but it’s the next best thing. The group create and play wonderful indie-pop melodies that are entirely themed around the cult classic dinosaur film. No, really. And it’s brilliant. Just go and check out their set if you don’t believe us!

Things may have been on the quiet side for Deaf Havana as of late, but that’s not to say they don’t have something brewing. They teased us with the track Cassiopeia late last year and if you catch them at Handmade Festival there’s no doubt that you may hear further evidence of what’s to come.

If you’re looking for a band to brighten up your day then look no further than The Xcerts who are guaranteed to whack a smile on your face at Handmade Festival. Having perfected their live show through their many tours (most recently with Deaf Havana) and festival appearances the trio make the type of feel-good noise (even if their lyrics aren’t always so upbeat) that you’ll want to bounce around to. Based on their success so far we’d say catch The Xcerts pronto, because if they aren’t already on your radar you’ll be thanking us for the introduction on Monday.

Welsh indie-pop six-piece Los Campesinos! haven’t been honoured the main support slot at Handmade Festival on Sunday for no reason, their time as a band having been one of many successes. Even if the sun isn’t shining outside of the venue they’ll be bringing the summer vibe to Leicester to brighten up your day, performing hits off their vast back catalogue. A perfect warm up for Sunday night headliners Swim Deep!

Having recently released their latest single Avalanche (described as their “most tumultuous, out-and-out rock songs to date”), Big Deal have already caught the eye of BBC 6Music DJ Lauren Laverne. Expect tracks from the band’s 2013 release June Gloom and perhaps a taste of some new material from their forthcoming album Say Yes. If rock-pop is your thing then stick Big Deal on your list of bands to check out this weekend.

We were first introduced to Leeds outfit Weirds when they supported Frank Carter & The Rattlesnakes in Brighton’s, and believe it or not the phrase “exactly what it says on the tin” is by all means fitting – in the best possible way. Expect to walk away feeling a little confused but hungry for more as the band dish up an unusual concoction of sounds, from echo-effect vocals to trance-like keys. Definitely worth checking out!

Having finished up with a run of tour dates with Vant this week, dirty pop outfit Get Inuit are perfectly warmed up for their appearance at Handmade Festival. The quartet was named as one of XFM’s Great X-Pectations for 2015 and have already been championed by Huw Stephens, Annie Mac and Greg James – you’d be a fool to miss Get Inuit whose future is looking extremely bright.

Need a little more help? We’ve put together a playlist of (almost) everyone playing Handmade Festival so you can check them out before you go!