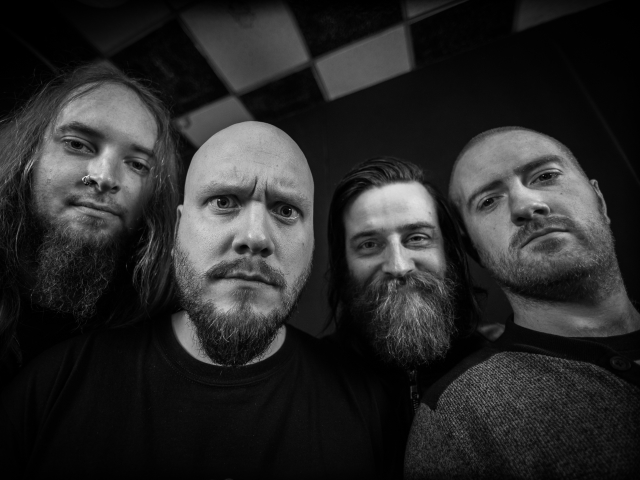 Right from the off, Wigan sludge pedallers Boss Keloid on Herb Your Enthusiasm make it clear that they aren’t here to mess around. Opener Lung Mountain, after an ominous bass intro, erupts into a noisy, repetitive doom riff designed to knock out the senses. Over the course of its near 8-minute run-time, the track of course goes elsewhere, into slower, almost prog-influenced instrumental sections, without ever relenting in its heaviness. These sections are progressive by way of pre-Crack the Skye Mastodon, rather than veering into over-indulgence.

As an album, Herb Your Enthusiasm sits somewhere between the full-fledged sludge onslaught of the Melvins and the more downbeat, stoner heaviness of Electric Wizard.

This comparison can be seen even in the contrast between certain tracks. For example, Haarlem Struggle is a fast, unsubtle sludge track, while Cone is a downbeat and doomy track which slowly builds up its layered heaviness over 6 minutes. Haarlem Struggle isn’t much shorter than Cone either, which shows Boss Keloid‘s masterful use of time within a track to create two different types of song.

The doomier tracks on Herb Your Enthusiasm can be seen as something as a progression for Boss Keloid, whose earlier releases veered more towards the sludge metal side of things. This works to their advantage on their newest release, as they are able to create longer, more intricate and interesting tracks than they have previously. A highlight of this is the crushing Axis of Green, a dark, brooding doom track clocking in at just under 7 and a half minutes. Unlike many tracks on Herb Your Enthusiasm, it rarely changes its set-upon path, but simply becomes more and more intense with every passing minute, both saving it from becoming boring and making it an album highlight.

This intricacy and more downbeat approach to song writing also allows the band to make better use of what is something of a stand-out with regards to the band’s musical chops: Alex Hurst‘s vocals. Not adhering to the traditional sludge standard of shouting or screaming, Hurst adopts a mostly clean, baritone vocal style. His vocal chops are best on display on Lung Valley (a…sequel to the first track, perhaps?), which strips back the instrumentation to showcase Hurst’s incredible range. This is a risky move: being a band involved in a riff-based genre, this could sacrifice some of the track’s impact; or highlight Hurst’s vocal weaknesses; or both. Fortunately, the band find the perfect mix and create an interesting track that isn’t too far removed from their standard repertoire.

The album ends with Hot Priest, a sprawling, 9-minute epic filled with wah-wah, riffs and a degree of experimentation with psychedelia, as one would expect from listening to the preceding album.

Herb Your Enthusiasm is a fantastic exercise in its sub-genre of metal, and comes highly recommended to any fan of sludge, doom or stoner metal.

For Fans Of: Electric Wizard, early Mastodon, High on Fire

VIDEO NEWS: BABYMETAL Reveal Video For New Single ‘The One’