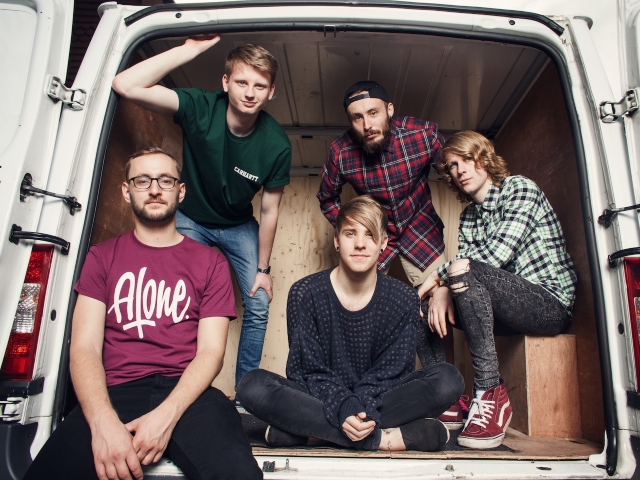 Since the release of their debut album Never Happy, Ever After in April 2015, As It Is have gone from strength to strength. From slots at Warped Tour and Reading and Leeds festivals to the re-release of their debut album with additional tracks, this is a band going places and fast. We headed down to the second of two dates at Camden’s Underworld to see their sold out show with support from Jule Vera and With Confidence we were hopeful for a sweaty night of musical fun.

Jule Vera took to the stage first, taking next to no time to get into their stride performing tracks taken from their Friendly Enemies EP. Frontwoman Ansley Newman stuns the crowd throughout with his versatile vocals going from soft and timid to gritty and gutsy within an instant. Scarlet Letter steals the show as the room lights up with just vocals and a soft piano accompaniment to focus our attention on. We loved feeling the personalities of the band ooze out through their performance, the guitarists who wanted to make things a little heavier by headbanging throughout and Newman who put her heart into every lyric sung whilst constantly thanking the crowd. By the end of Jule Vera’s set, the room was dancing around to their infectious melodies and heartfelt lyrics, showing that new fans had definitely been made in the short set.

Having recently signed to Hopeless Records, Aussie alt-rockers With Confidence had a supportive following within the crowd tonight. From the moment they walked onstage the party really kicked into action with jumping, clapping and chanting along being common throughout. Jayden Seeley specialised in crowd interaction, giving us all insights into the meaning behind tracks and making us all partake in an “Ozzy Ozzy Ozzy, oi oi oi” chant because apparently he does that everywhere back home… Recently released track Higher highlights the quartet at their best with a strong sing-along chorus, intricate drum lines and riffy guitars making it impossible to not dance along. The onstage friendships between the band really added to the experience for the audience making it clear the response they received genuinely meant a lot to them. With Confidence are a band with the confidence needed to become headliners in the very near future.

Tonight was set to be a special show for As It Is and their fans, not only for the fact The Underworld was sold out but because the setlist was to consist of their debut album Never Happy, Ever After and EP This Mind Of Mine. Opening with Speak Soft, the crowd did anything but as they chanted along word for word whilst jumping around to the infectious backline.

Frontman Patty Walters is a natural as he rouses the crowd into a frenzy with his witty lines such as before Sorry asking “Come on London, sing-along if you know the words!” when he most definitely knew the dedicated following knew word for word. From latest single Winters Weather right back to Bitter, Broken Me the energy never dipped from the crowd or the quintet for that matter. Ben Biss, Andy Westhead and Alistair Testo battled for space on the tiny stage as they got lost within their guitar playing during the explosive set.

Despite the set being almost a full blown sweat fest with no lapse in energy, there were moments of slow and serene as Relive The Story and My Oceans Were Lakes gave a stronger vocal focus which brought a truly heartfelt moment to the night. Revisiting older material was a great idea for these due with everyone loving the variation whether a new or old fan of the band.

Now for a pop-punk show there might not be any specific dress code, but guitarist Andy Westhead decided because of this he’d come out in a rather intriguing pair of er dungarees!? When heckled and asked by the crowd about it, he happily shouted “They’re dungarees motherfucker” to which we were informed is likely to be seen across an item of merch in the not so distant future.

Fan favourite Can’t Save Myself unleashed absolute chaos in the Underworld becoming an instant show highlight. The quintet works flawlessly as a band with smiles never leaving their faces when onstage with each other, Walters took it upon himself to reminisce over moving from the Barfly to Underworld in a year and about seeing H2O at the venue they were now playing when he was younger. One reason As It Is have become such a well-loved band is because they inspire others with their motivational words, musical support and reminder that “if you want it bad enough and care enough then it’ll happen” which is how the quintet achieved their goals.

As the show began to draw to a close You, The Room and The Devil on Your Shoulder left fans as emotional messes as just Walters took to the stage to serenade the crowd with such meaning, passion and belief. Once stepping off stage the floor began to shake and the chants filled the room as fans knew As It Is had a little bit more left in them. Coming on for an encore and performing further tracks Concrete, Cheap Shots and Setbacks and Dial Tones they left the crowd on a rousing high. Despite singing in closer Dial Tones, “Forget me like you know you want to” we highly doubt anyone will want to forget the mindblowing night As It Is provided everyone tonight.

Tonight couldn’t have been more memorable for those in attendance, As It Is are a band who put their heart and soul into every performance and tonight was no exception. Thanking the fans continuously throughout showed just how true to themselves the quintet have remained during their rising success. After such a slick performance and great response don’t expect to see As It Is in venues this size for much longer!