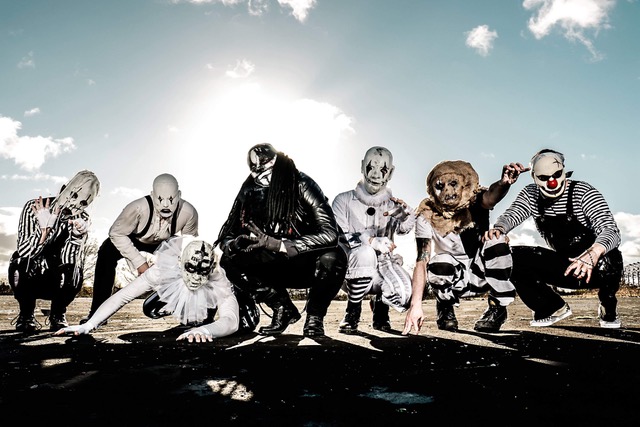 Introducing The Injester, the masked seven-piece who are bringing nightmares to life with their macabre circus display. The question is, who hides behind the masks? That remains unanswered, but one thing we do know is the members who make up The Injester have collectively played at the likes of Download Festival, Bloodstock, Hellfest, Wacken Open Air and more. We caught up with Skinface, Morax and Ashe to discuss their first musical memories, what The Injester wants to achieve and more.

Firstly tell us a bit about yourself and your band. How did the band form and how long have you been together?

Skinface: Several of us have worked together before, going back a few years, but The Injester as a concept began around four years ago.

Morax: Indeed, we were just wanting to do something a bit different. With a bit more drama and more of a definable sonic and visual output than what we are used to experiencing. We wanted to achieve something that we could enjoy ourselves too. What is not to enjoy about clowns and the clown horde? We are everywhere already.

S: We didn’t know how the music was going to sound until we did it, as we have a fair range of influences between us, but we did know masks were the way to go because of how uncommonly ugly we all are.

Ashe: Our musical backgrounds are pretty diverse and I like the dynamic that brings to the band. I was one of the final guys to join and came in two years ago.

M: Music has always been present in my life from an incredibly early age so it is an art form I have always communicated though. Being taught how to hit things and enjoy it is a blessing. Hitting things makes me happy.

S: No. But a fair punt would be listening to an Iron Maiden tape at around eight years old.

A: I’d got into music via my dad’s selections in the car but in terms of deciding I wanted to make and perform music – it was watching the Freddie Mercury tribute concert years ago. So much talent all on one event. Queen, Metallica, Guns, Bowie etc.

M: I’d say we are very much the product of our own musical paths. Our collective background takes from all genres and scenes so I’d say the main influences of The Injester is our environment. We are in a world that’s ever turning over different forms of mayhem and chaos and The Injester is just a product of that. Why be a normal band doing normal things, when the world we exist in really isn’t?

S: To have an ongoing excuse to wear tight clothes and a latex mask and hang out with other men dressed likewise.

M: To unite the clown horde from around the world. We all have an inner madness that we need to let out, so paint your face, dye your hair, whatever you want to do but be yourself and be the self that you really want to be. There is enough madness to go round! Show us your inner clown!

A: Can’t put it better than that!

For those who are yet to see you live, what can they expect from an Injester show?

M: I think that you should expect to see something you will not forget easily. We will always bring it to the present and assembled clown horde, so all we ask in return is that you bring it straight back to us and show us your inner clown!

A: Expect what the visual suggests – but the music also tells you a lot more!

What’s next for The Injester?

S: Taking the clown horde to Europe and beyond. As long as we’re allowed to cross the channel after Brexit.

M: Totally, that utter cabbage headed clown (not the good sort) that is currently riding at the helm of this island we find ourselves on needs to make sure we can get off this rock and spread the clown horde far and wide! But watch this space, we are many and we are busy. The horde is coming!

A: We’re just getting started…

VIDEO NEWS: Neck Deep Release Video For ‘When You Know’